As crews worked to demolish the Florida house where a man was killed after being sucked into a giant sinkhole, onlookers got their first glimpse of the hole that claimed the life of 37-year-old Jeffery Bush as he slept in his bed in a Tampa suburb Thursday night.

Authorities were not able to recover Bush’s body and they worked through Sunday and Monday to demolish the home in the suburb of Seffner after they deemed it to be unstable and too dangerous to enter.

When the hole was revealed, the heavy machinery paused so that family members could lay momentoes in the hole, which has now become Bush’s grave, reports the Tampa Bay Times. Using an excavator, family members were able to place flowers, a stuffed bear and an American flag into the hole.

When the sinkhole first opened under Bush’s bedroom, his brother, Jeremy Bush, heard his screams and tried to dig him out, but wasn’t able to. Jeremy Bush and the four other people who were also living in the home escaped. “I want to let him know I loved him,” Bush’s brother Jeremy told the Times earlier in the day. “I tried my hardest to get you out, bro.”

Crews then began the task of filling the hole with gravel. 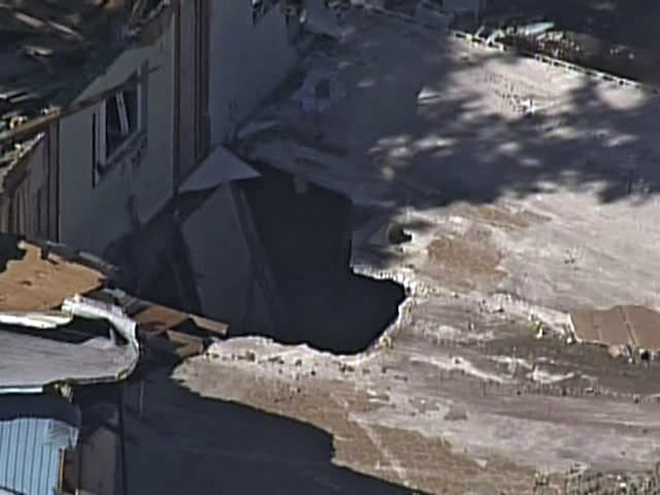 Meanwhile, a second sinkhole appeared in the Tampa area Monday, just three kilometres from the site where the Bush home once stood.

That hole appeared between two homes and was about 3.5 metres (12 feet) across and up to 1.5 metres (5 feet) deep in the centre, reports Reuters. No one was injured.

That second sinkhole is geologically unrelated to the first, authorities said. “Sinkholes are seasonal and this is just possibly a seasonal coincidence,” said Hillsborough County spokesman Willie Puz.