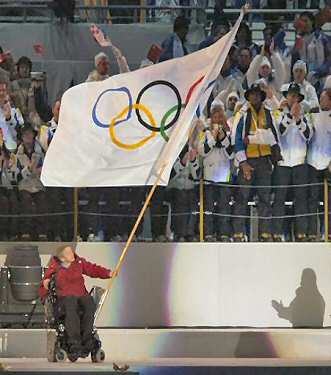 by some sightseeing and then his participation in the upcoming torch relay for the Paralympics. You might think it would be a challenge for Sullivan, a quadriplegic, to hoist the torch, but the gritty mayor has it figured out. He tells me he’s reusing the device he’d had attached to his motorized wheelchair to wave the Olympic flag during the closing ceremonies of the Winter Games in Turin. It was his role, of course, to wave the giant flag as the mayor of the host city for the 2010 Winter Games—now just 18 months away.

Sullivan’s jubilant flag waving in Turin was far and away the best part of Vancouver’s lame contribution to those ceremonies.

The flag-holder was an inspiring bit of ingenuity, and now, with a bit of a retrofit, Sullivan’s wheelchair will hoist the torch. He hopes his participation will send a message in advance of those Games that all things are possible with a bit of determination. Well, all things except winning reelection. Sullivan lost his civic party’s nomination for the next mayoral election, which means any flag waving he does in Vancouver in February 2010, will be from the sidelines. Politics is as cruel as sport.

Speaking of determination, what’s that I see on the mayor’s lap?

Why, if it isn’t an English-Mandarin phrase book. As a good politician in a multicultural city, Sullivan had long since mastered basic Chinese. Trouble is, he learned Cantonese, which is the predominate language of the many of the Chinese who settled in Vancouver, especially those from Hong Kong. That doesn’t do him much good here. “It’s sort of like the difference between English and French,” Sullivan says of the two. Both Cantonese and Mandarin use the same system of written symbols, but the words and tones are entirely different. “It would be like us writing English and French, in Latin,” he says.