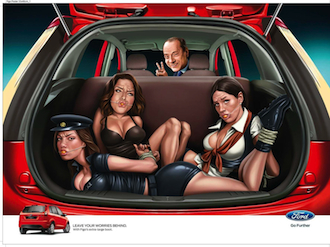 Ford India is making apologies for three advertisements that never ran, one of which showed former Italian prime minister Silvio Berlusconi in the front seat of a Ford Figo with three bound women in the trunk.

While the ads weren’t actually used, they were displayed over the weekend on a website meant to showcase creative advertising, The Associated Press reported Monday.

The timing for the ads to surface online was particularly bad in India, where the country has been dealing with a high-profile gang rape and murder case. In addition, India just passed a law meant to prevent violence against women.

“We take this very seriously and are reviewing approval and oversight processes, and taking necessary steps to ensure nothing like this ever happens again,” Ford spokeswoman Sethi Deepti told The Associated Press in an email.

Ford didn’t put an official apology on its website, notes Forbes, mainly because the advertisements were never used by the company.

Even JWT India, the agency responsible for the ads, said they were never meant to be released and that the creator wasn’t paid for the work. “These were made as posters by individuals. They have never been paid for and were not expected to be released,” the JWT CEO told The Economic Times.

The copy on the Berlusconi ad boasted of the Fiat’s trunk size and the image was a likely reference to an ongoing court case where the former prime minister is accused of being at the centre of a prostitution ring, including wild “bunga bunga” sex parties, some with underage prostitutes.