French people: they really love us! 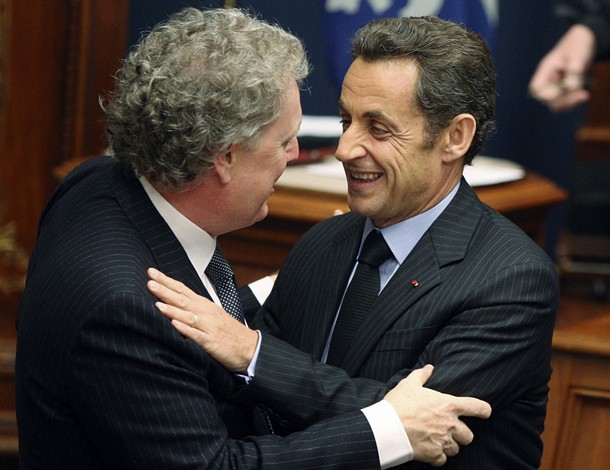 Jean Charest and Nicky Sarko are BFFs, no secret there. Nick, though, has gone beyond friendship’s call of duty as of late, what with his a) bestowing the France’s highest honour to Quebec media/publishing/insurance/finance/energy/Friend Of Canada™ giant Paul Desmarais; and b) putting to rest that pesky and inconvenient ‘Vive le Québec libre’ business visited upon the province by a wily little scamp named Charles De Gaulle. Giving the Légion d’honneur to über-Federalist Desmarais was a stroke of genius, as far as federalists were concerned, and it (not coincidentally) dovetailed with Sarko’s own policy of loving Quebec–as long as it remained nuzzled serenely in Canada’s bosom. Sovereignists were distraught, deflated and, as per usual, furious. “What I think is Mr. Sarkozy has maybe misunderstood our project,” Pauline Marois said at the time.

Now, it seems, Sarko has yet again slapped Charest on the back (or his chest)–this time with a Légion d’honneur medal. According to AFP, France will likely make Charest a ‘Grand Officier’, the third highest rank of the order, in early February. This new lapel bling will look great on Charest’s perpetual blue suits, and will send sovereignists into a state of apoplectic shock.