George W. Bush, painter ... but just what is he trying to say? 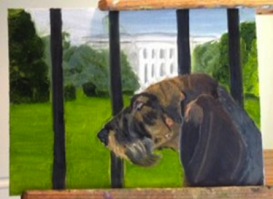 New works by a famous American painter are giving pundits a window into the inner world of George W. Bush; after all, he’s the artist behind them. The former U.S. president is garnering both praise from the likes of vaunted American art critic Jerry Saltz and derision for his post-politics hobby.

In a new round of images leaked this week, Bush’s portrait of a dog stands out. In it, the hound appears to be sitting on the wrong side of a fence with the White House in the distance: a commentary on the artist’s previous life? Perhaps. Words never were Bush’s strong suit.