Germany to Bieber: You have four weeks to pick up your pet monkey 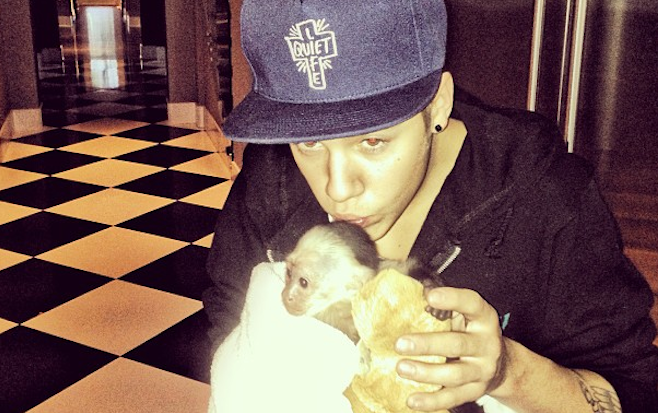 So far, this much is clear: Justin Bieber was recently given a tiny capuchin monkey. The gift may have been from record producer Mally Mall, who tweeted the first picture of Bieber with his new pet named “Mally”, or from music producer Jamal Rashid, as a birthday gift for the Canadian singer.

Then Bieber decided it would be a good idea to sneak the 14-week-old monkey into Germany, via his private jet, for the latest European leg of his Believe tour.

But after landing in Munich on March 31, custom officials seized little Mally when Bieber broke strict health laws by failing to produce the necessary documents that are usually required in most places when you try to bring a monkey into their country.

German authorities have given the 19-year-old pop star four weeks to pick him up or else Mally the monkey will be placed “in permanent care”.

The good news is that several zoos have offered to give Mally a home if Bieber doesn’t reclaim him in time. And if history–or TMZ–has taught us anything it’s that maybe Bieber won’t even bother to pick up Mally because last December he gave away his pet hamster named PAC to a random fan. That fan promised to take care of PAC but then Pac died earlier this month.

While Germany waits for Bieber to pick up his pet, Mally is being kept in quarantine in a German shelter. They said in a statement that the monkey should not have even been taken away from its mother until it was at least a year old.

But Darwin–also a capuchin monkey–seemed pretty independent at five months old when he was found wandering alone in a Toronto Ikea parking lot wearing a shearling coat and a diaper. Plus, Darwin is getting a book launch and has his own Twitter handle.

Since his European tour began, Bieber has had an Instagram meltdown, was kicked out of a nightclub on his 19th birthday, started a show in London nearly two hours late, collapsed on stage at another London show, fought with photographers and cancelled a show in Portugal.

But with the support of nearly 34 million Twitter followers, Bieber is bound to bounce back.