A smooth ride under a big sky

THEN: (Gull Lake, Sask.) In 1912, there were no road maps to guide the way west. Thomas Wilby wrote that he and Jack Haney were led across the prairie by a local driver along roads and tracks “of the most amazing description, wheeling and returning on his course at the most unexpected places, and darting across the rough stubble while his car swayed and pitched like a tiny craft caught in a heavy swell.

“We bumped through sand dust and furrows, manoeuvring in wide sweeps like swift-wheeling cavalry until we picked up the railroad in the absence of any other recognized route. Gates had to be opened and shut incessantly, and it was evident that for at least half the time we were on no commonly recognized highway.” 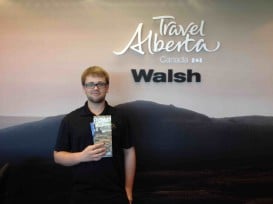 Victor the tourist guide, with a $2 road map

SOMETHING DIFFERENT … (Walsh, Alta.) At the Alberta Welcome Centre, plenty of free tourist literature is readily provided but it costs $2 for a provincial road map. Alberta is the only province to charge visitors for its road maps.

“It’s just always been that way,” says Victor the tourist guide. “We have a road map here from 1987, and it was two bucks back then.”

NOW: (Medicine Hat) There’s little doubt that Alberta’s 55 kilometres of Trans-Canada from the provincial border to here is the best quality of highway I’ve driven since New Brunswick.

It’s smooth and wide and properly painted and well maintained – no seams of bitumen or patched-over potholes. It’s four lanes, safely twinned, and a pleasure to drive underneath the big sky.

Best of all, when it’s time to stop for fuel, gas is selling for $1.15.9 / litre, which is a far cry from the $1.35 of Newfoundland and Northern Ontario last month. 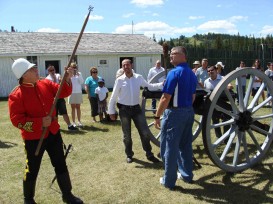 SOMETHING FROM TRISTAN, 12: (Fort Walsh, Sask.)

Today we went to Fort Walsh. We looked at many artifacts and then watched a movie on the history of the Fort Walsh massacre.

We eventually made our way down to the actual fort and watched a cannon being fired because a group of people had arranged for it. Everyone was saying how loud the cannon was, but compared to other cannons that I’ve heard it wasn’t actually that bad.

We also had a little bit of a tour of the camp before we had to leave for Medicine Hat because the CAA had to take pictures of my dad and the car.

Cypress Hills in my opinion was a great escape from the long flat prairie and now that we are in Alberta we won’t be seeing prairie for much longer. 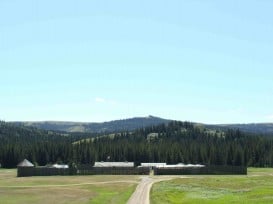 Fort Walsh, in the Cypress Hills