Google Glass tester wears them in the shower (they're waterproof) - Macleans.ca

One of the people lucky enough to get his hands, and face, on one of the first 8,000 beta pairs of Google Glass has tested them in the shower and posted the photographic evidence to prove it.

Just in case you were wondering, Google Glass is waterproof, at least according to tech blogger Robert Scoble, who posted a picture of himself in the shower wearing Google Glass on Google+.

“You thought I was kidding when I said I would never take them off,” he wrote alongside the photo. 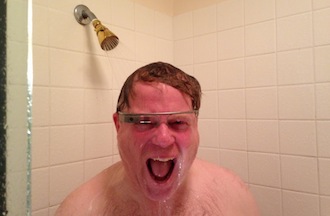 This wearing-them-in-the-shower picture comes after Scoble penned a review, which he posted at Google+, where he vowed to never take off Google Glass. He writes: “I will never live a day of my life from now on without it (or a competitor). It’s that significant.”

The review, and ensuing shower pic, isn’t that surprising coming from Scoble, who the Atlantic Wire describes like this: “Scoble is a bit of an odd duck in the tech world. He doesn’t do much besides take new tech things and then cheer them on and then move onto the next cool thing.”

There were even suggestions that Scoble’s over enthusiasm could be damaging the brand.

I think Google need to capture @scobleizer and lock him away. He’s fast ensuring no one ever buys Google Glass!!

As initial reviews of Google Glass are published, not everyone is such a fan.

At techcrunch.com Mike Butcher writes: “this product simply will not become a mass-market device any time soon” and describes them as “this era’s Segway: hyped as a game changer but ultimately used by warehouse workers and mall cops.”