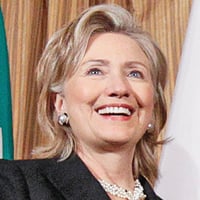 Hillary Clinton’s personal makeup shield
For the G8 foreign ministers’ conference, U.S. Secretary of State Hillary Clinton stayed in the Karsh suite of the Fairmont Château Laurier, where famous Ottawa photographer Yousuf Karsh lived for 18 years with his wife, Estrellita Karsh. Famous Karsh photos in the apartment include ones of Pablo Picasso and George Bernard Shaw. The suite also has what Mrs. Karsh describes as “the sexy shower”—it’s lined with marble and has three tiers of water jets. CTV’s Tom Clark went to the Château to interview Clinton for his show Power Play. Before the interview, Clinton pulled out her makeup kit for a touch-up. Seamlessly her security detail moved in front of the cameras. When the freshening up was done they moved back into position. One G8 attendee, British Foreign Secretary David Miliband, was very low maintenance, according to staff at the British High Commission who said his only demand was that he be able to walk everywhere. “He has lots of energy,” noted the staffer. While Miliband (who has been touted as a future leader of Britain’s Labour Party) was in the foyer of the House being interviewed by the CBC, a rare hush descended. People seemed star-struck by the politician—well, except for Industry Minister Tony Clement, who walked down the stairs loudly snapping his fingers, even doing it behind Miliband as he was being interviewed. “I am a snap-happy kind of guy,” he later joked when he realized what was going on. 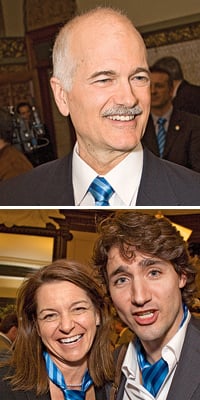 MPs flaunt accessory chic
All parties were united in wearing blue to show their support for NDP Leader Jack Layton and his battle with prostate cancer. The men were given ties and the women scarves by Prostate Cancer Canada. Liberal MPs Martha Hall Findlay and Justin Trudeau traded. Trudeau made the scarf an ascot and wore it as the mandatory-tie-for-men in the House of Commons. “A tie is a tie is a tie,” he said. “I did the research.” Trudeau noted the ascot was also a way to remember his father Pierre Trudeau with “a bit of flamboyance.” The former PM died from prostate cancer and other medical complications. Other MPs also tried adding some panache to their blue made-in-Canada, 100 per cent Italian-silk accessories. NDP MP Megan Leslie tied hers around her neck, evoking airline stewardess chic, while Public Works Minister Rona Ambrose wrapped her scarf around her waist. All the parties paid tribute to Layton in their member’s statements before question period, an unusual departure. Normally, the statement made right before QP is by a Conservative trying to drag Michael Ignatieff through the mud. But this time Conservative MP Jim Abbott spoke about prostate cancer and said he told Layton he looked good in a blue tie. The NDP leader replied that his father (a Tory in Brian Mulroney’s cabinet) would have been proud. Prostate Cancer Canada president and CEO Steve Jones said the event was a milestone for his organization and that they could not have hoped for better awareness for the condition, one that he says one in six men will be diagnosed with in their lifetime. At a reception after QP, Layton, who has been on a health diet, joked he has never eaten more broccoli in his life. “No cheese,” his MP wife Olivia Chow reminded him. Chow herself was spotted grabbing greasy spring rolls. “I am eating them on Jack’s behalf,” she joked.

Why those reporters are  yelling at Michael Ignatieff
One CBC reporter has noted that Liberal Leader Michael Ignatieff chooses to take the loudest questions during scrums, which is annoying, they say, for those journalists who tend not to yell. NDP Leader Jack Layton, the reporter added, is much better at spreading the wealth—or being smart and picking the people he prefers to answer.