Handwritten notes, in! Blackberries, out! - Not-even-remotely-liveblogging the Federal Court (Part 1) 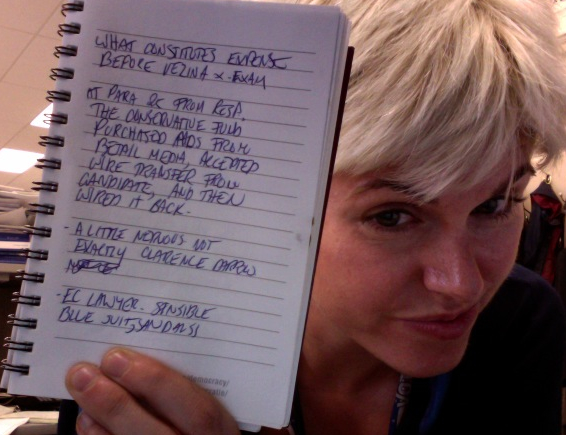 [NOTE TO READER: I tried to stay as close to my original notes in this transcription, although I have included the odd explanatory note – mostly when I couldn’t read my handwriting, or it turned out to be missing nouns, verbs or, in some instances, any semblance of narrative coherence. Unless in quotes, assume all statements are paraphrased, although I tried to be as accurate as possible, and finally the timestamps are wildly approximate. Y’all, I am lost without my BlackBerry shortcuts – how I’ve missed you, LT.]

PART 1- Michel Decary for the Conservatives – Let my affidavits go! Or, in this case, come in!

9:30 a.m
Michel Decary, attorney for Callaghan, Pallet et al (applicants) begins by explaining that this motion is to allow additional affidavits, after which he has a few words to say about the schedule.
There are four conditions on which the motion should be granted, but he’ll begin by showing that there was evidence that was not available prior to the cross-examination of Janice Vezina [executive director of electoral financing at Elections Canada]. The applicants [former official agents L. G. Callaghan (AKA Gerry) and David Pallet] were “never made aware” of the new test on what constitutes a candidate expense.

He’s a little nervous – not exactly Clarence Darrow – but considering he’s relatively new to this case, that’s not surprising. Meanwhile, Barbara McIsaac, who has represented Elections Canada from the beginning, is quietly making notes. He’s wearing a nondescript suit with an unexpectedly ornate purple tie; she is in a sensible blue pantsuit and comfortable-looking sandals.

He explains how the in and out system worked,  from the party’s perspective: parties can transfer funds – money in – which may be used on election expenses – money out. In … out. Memories of Poilievres Past. Yes, the ad in question was a party ad, not a candidate ad, but the question is who incurred the expense.

As he speaks, Decary is starting to shift his weight from one foot to the other in a hypnotic, if subtle rocking motion. Meanwhile, the prothonotary is watching impassively, her chin resting on one hand, but tipped to the side to demonstrate alertness; she is also holding a yellow highlighter.

It becomes clear that Decary has gotten lost in the shuffle of papers and rhetoric; he’s flipping furiously through the case binder, as is the prothonotary – Mireille Tibab – and opposing counsel, and the person sitting next to me – who turns out to be Francois Bernier, director of legal services for Elections Canada, who appeared beside Marc Mayrand during last week’s Ethics hearing. I’m the only person in the room without a binder through which to flip.

And now, onto the crux of his argument, which also hearkens back to last week’s meeting: the “updated” version of the 2007 Elections Canada manual/handbook for candidates, which removes the words “party” and “leader” from the explanation on advertising expenses. “We can go through all these years,” Decary begins, but Tabib interrupts him, saying “I don’t think we need to do that.” Decary obliges, and notes that, when making his decision on the rebates, the Chief Electoral Officer “concluded that hte ad did not promote the candidate,” but made no mention of the “deletion” of those two words.

Tabib points out that the Donald affidavit, which was filed much earlier in the case, referred to the change, but Decary argues that they didn’t realize the “new” rule was applied retroactively to the 2006 election. Tabib is still sceptical, and again suggests that it is the Chief Electoral Officer’s interpretation of rule in question – Rule 407, to be precise – has been an issue throughout the case. But why would Donald mention it if it wasn’t already on the record, Tabib asks again, to which Decary explains that Donald was just there to explain the practice itself, as an accountant – he didn’t realize that the “new” definition had been used in analysing the 2005/2006 expenses.

According to Decary, during crossexamination, Vezina admitted that a candidate who was an “absolute nobody” could decide to promote the party, or the leader, in order to ultimately promote his own election. “We’d never heard this,” he insists. Tabib points out that the excerpts he has read into the record from the Vezina deposition are, in almost all cases, his own questions – what were the answers? Decary sort of dances around that point, and admits that, if it had been a straight “yes” or “no,” they probably wouldn’t still be in court — and that, in turn, makes Tabib wonder how, in that case, this constitutes a reason to introduce further evidence, since it’s fundamentally the same issue that they’ve been arguing since the beginning.  Decary suggests that it could lead to more evidence – or the resubmission of old evidence, like the mound that Tabib rejected earlier this year to bolster the now largely discredited “Everybody else does it” defence.

Decary, who keeps promising that he’s almost finished with his argument, acknowledges that “the other side” – i.e. Elections Canada – will argue that it was the party that controlled the money and the content, so it was a “party ad,” but even so, parties can transfer money – as much as they want – provided that the candidates don’t spend over their respective limits. But in this case, Elections Canada saw the transfers and wen, “HA-hah. This is very suspicious,” and proceeded to investigate further.

Tabib wonders if Vezina, or anyone else, has suggested that Elections Canada relied on the manual instead of the legislation itself in its interpretation of the law – the Elections Act, she reminds Decary, has not changed since 2007, and Vezina never stated that she was using the handbook instead of the Act — those were Decary’s questions, and his construct, but did she ever say that? Decary claims that she does, and once again flips through the transcript, but doesn’t find the quote he needs. “I understand what you’re saying,” he tells the prothonotary, “I’ll find it, and I’ll prove it.” He then returns to the question of subjective versus objective interpretation, and calls this a “subjective test.”

(At one point, Decary forced to admit that it was actually McIsaac who submitted the latest affidavits, as he wasn’t aware that it was necessary, which is what happens when you take over a case so late in the pre-trial phase.)

Tabib suggests that this whole theory is designed to boost the applicants’ case – which is apparently not enough to allow it to be added as evidence – and wonders how it changes the context as far as ridings that didn’t have candidates at the time that the money was transferred, especially considering that Elections Canada will argue that the interpretation requires the full context — all the transfers, and all the ridings, not just case-by-case scenarios. Decary maintains that the evidence in the affidavits “could possibly be both relevant and crucial,” but Tabib admits that she is wondering whether it was also relevant and crucial before now. “A lot of people vote for a party rather than a candidate,” she points out. Wouldn’t this have occurred to the applicants before now?

Decary, who is now unconsciously wielding his binder as a sort of shield, says that the court may agree with the “new interpretation” – in which case this new argument may become crucial. Is that not the basis for the review itself, though, Tabib muses.  If it goes before a judge, Decary says, the court may conclude that the applicants should have made this proof beforehand, which prompts a brief tangent over the purpose of judicial review — it isn’t to render the opposite decision, but to decide if the original decision was made in a proper manner.

Moving on, Tabib observes that the argument being stressed by the applicants is that the official agents were aware of the expense, but the only evidence of that comes from Dave Pallet, one of the two applicants. What about the rest? On that logic, she suggests that perhaps only the key salient paragraphs from the affidavits should be accepted – the first paragraph, in which the agent says who he is, and that he agreed that the campaign should participate in the media buy. Even so, though, this point has been part of the controversy since the very beginning of the judicial review — is this just a way to “bootstrap” new evidence that bolsters what is already there? No, no, insists Decary — it is to provide context. “I think a judge would want to know about this,” he concludes, and that is why it should be allowed — there is no risk of prejudice, and it doesn’t madd to the material on the record. “It just adds context.”

“And there will be cross-examination, of course,” Tabib doesn’t really so much ask as state as fact. “Of course!” Decary agrees. Cross-examination, and whatever else flows from the affidavits.

With that, the court takes its regular morning recess – a 10 minute break for BlackBerries, Red Bull and frantic blog updates.