Happy birthday at the summit

Fifty years ago, WAC Bennett declared the Trans-Canada open at the Rogers Pass

THEN: (Rogers Pass) Happy birthday today to the Trans-Canada Highway! It was opened 50 years ago when BC Premier WAC Bennett declared BC Hwy. 1 open at the Rogers Pass. At that moment, in front of 7,000 people, he snipped a ribbon near Revelstoke, 70 km west of here, and the current road was open to be driven across the country. 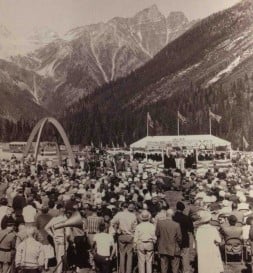 The national opening ceremony in 1962 at Rogers Pass

There’s no celebration of this here today, though. That’s because Bennett’s provincial ceremony had pipped the federal government to the line – the official opening of the Trans-Canada Highway took place Sept. 3 in front of another 4,000 people, here at the summit of the Pass in Glacier National Park. That’s when Prime Minister John Diefenbaker tamped down a patch of asphalt and declared the Trans-Canada Highway to be open. Except that motorists had been driving it for the previous five weeks.

This was all due to money squabbles. Bennett wanted the feds to pay a greater portion of the cost of construction, but Diefenbaker refused, reasoning that Ottawa was already covering the complete cost of construction through all national parks, including both Revelstoke and Glacier on the run through here to Golden.

“There was one of the most peculiar, self-centred actions that I’ve ever known,” Diefenbaker said later of Bennett’s ceremony.

The national ceremony was not without its own controversy, though. It was snubbed by both Newfoundland and New Brunswick, both of which claimed, not incorrectly, that their portions of the road were far from finished. In Newfoundland, 600 km of the 1,000 km highway had yet to be paved and Joey Smallwood was holding out for more money. Did he get it? Find out more about the “Complete the Drive by ’65” movement here.

The Rogers Pass took six years to construct through some of the most challenging terrain in the country. There was already a CP rail track through the pass, completed just before the last spike was pounded home in 1885, but was a dangerous track – hundreds of people were killed by snowfalls and avalanches before it was pushed underground by the eight-kilometre Connaught Tunnel in 1916. I’ll tell more about the TCH’s remarkable construction here in tomorrow’s blog.

NOW: (Rogers Pass) The Rogers Pass is not the highest point of the highway – that’s the Kicking Horse Pass east of here, which I mentioned yesterday. It’s still plenty high, though, at 1,330 metres (4,364 feet) and gets an average of more than eight metres of snow every season. 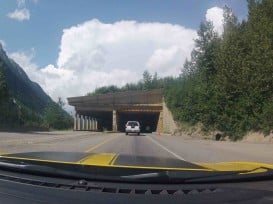 Snow tunnel on the TCH

Much of the challenge of the road’s completion was to protect it from avalanches. This is done with – among other things – explosive charges to knock out large accumulations of snow before they have a chance to build, and cone-shaped barriers of concrete scattered on the mountainside to dissipate sliding snow.

Most obvious, though, are the snow tunnels: literally, above-ground tunnels that mean any avalanches pass over them and into the valley below, without affecting the road itself. When I drove through here last summer, I assumed these were actual tunnels that cut through the cliff-face, but they’re not. They weren’t created to ease the road’s construction but to prevent its destruction.

SOMETHING DIFFERENT: (Rogers Pass) And happy birthday to me, too! I was born at the exact moment that Bennett was cutting that ribbon 50 years ago. People tell me I was born to drive this highway, but I think I’m just up for a good road trip. 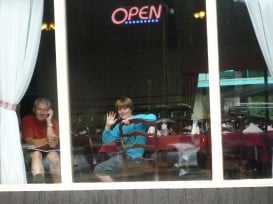 On the phone with the CBC at the Rogers Pass hotel

You may have heard me explaining this on Monday. If you listen to CBC in the afternoon, there’s a good chance you did: I had 16 consecutive interviews with local radio hosts, each for 10 minutes or so. Phew!

The interviews were booked through the CBC’s syndication service, and then they called to make sure I was still available. The problem was the only fitting place for me to do this was from here on the summit of the Rogers Pass, and I really needed a landline. My cell phone had five bars of connection on it because there’s a Bell tower up here, but then a thunderstorm rolled in and the service dropped off, usually just as I was getting introspective. CBC Charlottetown in PEI lost me during a live broadcast and never did call back – sorry. 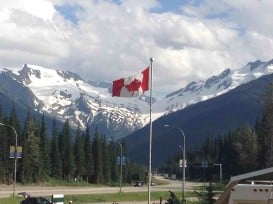 The view through the window

There’s a hotel up here though – who knew? – and I booked a room that came with its own phone for the final dozen interviews. It’s an older hotel, built just 18 months after the opening of the pass. A couple of fellow travellers driving home to Vancouver from Halifax met me up here after keeping in touch throughout this journey and they took Tristan off for lunch while I set things up. Thanks, Ed and Bev Frazer.

SOMETHING FROM TRISTAN, 12: (Rogers Pass) Today was my dad’s birthday and I bought him a gift that I think he enjoyed. It is basically a guy riding a motorcycle that you can put a wine bottle in to create the body.

We are staying in a hotel right on the Rogers Pass and he’s definitely happy about that because of the whole “birthday at the same time as the opening of the Rogers Pass” thing.

Also, at our hotel, one of those tourist buses showed up and a whole bunch of people unloaded and were fascinated with the gophers. They took lots of pictures of me because I happened to be feeding the gophers at the time they showed up so maybe I’ll be famous in China. 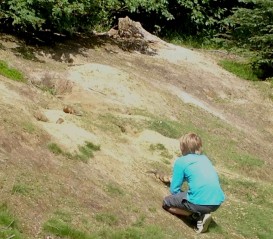 Tristan with the gophers

Today was a great day and maybe and hopefully tomorrow will be too.