Has Starbucks gone off the rails?

Rumors about the new Starbucks instant coffee have been brewing (har har) for a while, and so it was when I walked into the usual place this morning that I was confronted by this on the door: 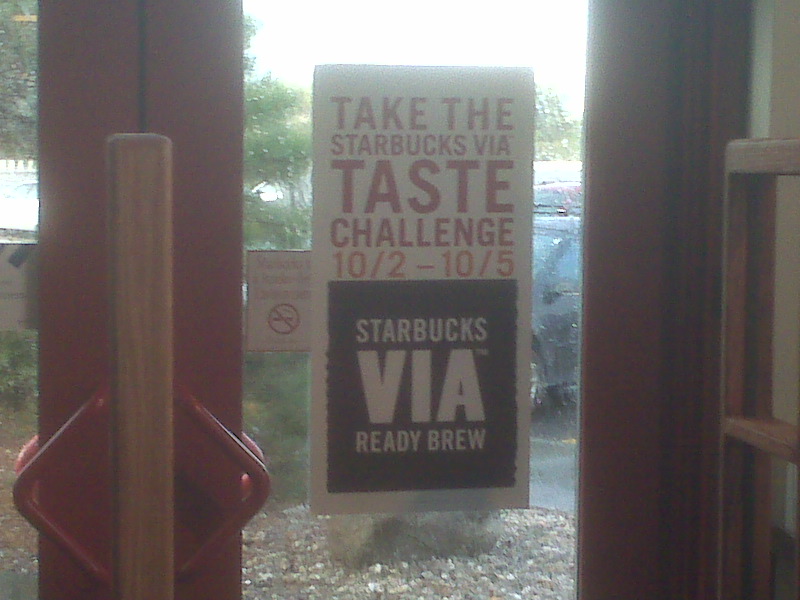 Standing in the slower-than-usual line, we were accosted, one at a time, by a pushy employee brandishing a tray full of paper shot-cups full of the new instant drink. It was, she assured us all, a) delicious, b) indistinguishable from the regular Starbucks coffee, and c) half the price. Same deal when we got to the counter: normally pleasant baristas turned into glassy-eyed caffeine-pushers. I asked the floor manager what the deal is with the new coffee, and he claimed, again, that it was literally just as good as the regular coffee.

So it has come to this: Instead of trying to upsell its customers from regular $2 coffees to complicated drinks that cost as much as $5, Starbucks is now trying to downsell you on little packs of fancified Folgers.

Things have been tough for Starbucks for a while. It expanded too much, made some bad decisions (like moving to automatic espresso makers) that killed the authentic-coffee-shop ambiance, and it has been experimenting with stuff like non-branded cafes.

And I can see why the company — which has long fought against the perception that it is the home of the $4 coffee — might think that a cheaper, instant drink might be a way of bringing in more cost-conscious drinkers, especially in the recession. But I really don’t like the way they’ve executed it.

First: They are being way too pushy about it. When someone is standing in line preparing to drop five bucks on coffee and a muffin — that is, gearing up for what is for many people a serious morning ritual — to have someone trolling up and down the line shoving shots of lukewarm instant in your face is a really bad idea.

Second: Whoever thought up the “just as tasty as our regular coffee” selling proposition should start cleaning out his or her desk. That’s insane. Same great taste at half the price? Way to defend your price-point, guys.

Third: This  “taste challenge” thing is seriously lowbrow. It’s going to remind older customers of the Pepsi Challenge, and simply put off anyone who up to now has thought that a two-dollar cup of Verona is worth it. What’s the goal here, to make your customers feel stupid for paying double the price all these years?

Fourth: It’s not clear the company gave a moment’s thought to the connotations, for Canadians, of the VIA brand name, which is associated with slow service, bad food, and inefficient government management. VIA, the drink that wastes your time and money!

Fifth: The one sure market I can see for this stuff is campers, hikers, and other outdoorsy types for whom camp-coffee is as hassle, and camping-espresso makers are too yuppie. I can also see students, low-income customers, and maybe mid- to low-end hotels putting it in their rooms.  But I’m not sure Starbucks should be selling this stuff in their stand-alone stores, where the only outcome can be that it dilutes the brand and cannibalizes more expensive sales.

This may not be a fiasco. But it tastes like one from here.