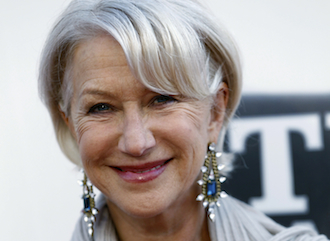 Helen Mirren is making headlines for an impromptu performance she made while dressed as Queen Elizabeth II.

Mirren, 67, has been playing the Queen in the play The Audience, which recounts conversations between the Queen and various former prime ministers. She was on stage Saturday night at the Gielgud Theatre in London when some drummers outside were making so much noise that it was distracting from the performance. It got increasingly worse by the second act, reports The Telegraph.

Out marched Mirren — wearing pearls and a tiara — to yell at the drummers.

“I’m afraid there were a few ‘thespian’ words used,” she told The Telegraph. “They got a very stern royal ticking off but I have to say they were very sweet and they stopped immediately. I felt rotten but on the other hand they were destroying our performance so something had to be done.”

Apparently her efforts worked to quiet things down.

The drummers were from As One in the Park, a gay and transgendered festival, and they released a statement that read: “Clearly angered she shrieked ‘Quiet! I’m trying to do a play in here! People have paid a lot of money for tickets’.”

Actor Rufus Wright, who plays David Cameron, also got in on the action. The Guardian reports that he tweeted: “Just fulfilled a lifelong ambition by bellowing at 25 drummers to shut the f–k up. West End theatres got thin walls.” And: “You should have seen Helen. She came out in full Queen costume and shouted at the drummers too. Honestly. It was breathtaking.”

However, those comments were later removed from his account.

For their part, organizers at the As One in the Park festival seemed to see the orders from Mirren as a publicity opportunity. One of the drummers, Mark McKenzie, told The Telegraph: “Not much shocks you on the gay scene. But seeing Helen Mirren dressed as the Queen cussing and swearing and making you stop your parade – that’s a new one.”

They apologized and invited Mirren to attend the festival.