Hells Angels at Tim’s, and a tall temperature tale

NOW:  (Thunder Bay) Tristan and I stopped at the memorial to Terry Fox that’s just east of town. We came here last year in an RV and the statue was no less impressive this summer and just as inspiring.

More than $600 million has been raised to combat cancer by Terry Fox runs since his death in 1980. The idea inspires many others to push their limits across Canada, including a couple of pairs of cyclists I met in Newfoundland. But the idea is also running its fund-raising course: this recent Maclean’s article tells about the glut of people cycling across the country and the hard time they have to get any attention.

And then there’s Hirotaka Suzuki, a 27-year-old chemical engineer from Japan who’s walking from Vancouver to Toronto just, well, because. “If this journey is a success, I won’t get any money, but I will get to Toronto,” he told me in uncertain English. After Toronto, he’d like to go to the Caribbean for the winter, or maybe South America, just to see what’s there.

An OPP cruiser pulled up as I was talking with Hirotaka beside the road, about 20 km east of Nipigon. The cop just wanted to check everything was OK. When I told him about Hirotaka’s long walk, the officer laughed good-naturedly: “I know – he’s crazy!”

The cop was probably happy he hadn’t been called over to Thunder Bay, where half-a-dozen cruisers and blacked-out SUVs were setting up shop on the highway beneath the Terry Fox memorial when we passed by later. 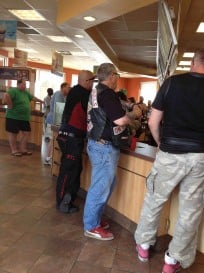 Some Hell's Angels at the local Tim's

They were almost certainly there to intercept a small group of about a dozen Hell’s Angels who we met in Nipigon, all of us ordering coffee and iced lemonades and sandwiches at the local Tim Hortons.

Far be it for me to tell the cops how to go about their business, but if they’d wanted to be absolutely certain of stopping the Angels as they headed west, they could have put a roadblock at Shuniah, a short distance east along the Trans-Canada Highway. This is where Terry Fox was forced to end his Marathon of Hope, and as best I can tell from any maps, the 2.8 kilometres of TCH between Nelson Road and the road down to Sleeping Giant provincial park is the only point in Canada where there is no alternative road. If you want to cross the country, you have no choice but to drive on that stretch of highway.

THEN: (Neys) There was no road anywhere near the current Trans-Canada in World War II, although the gravel highway between Hearst and Geraldton, roughly 100 km to the north, was constructed in 1943. This provided the final link between east and west; once it was complete, it was possible to drive across Canada without going into the United States.

Brig. Alex Macfarlane and his friend Ken MacGillivray were the first people to make the successful crossing, in 1946, and Macfarlane earned the Todd Medal for doing so. I’ll tell more about them tomorrow, but here’s an introduction.

These rocks in the shape of a star formed a flagpole base.

This isolation made the area an excellent place for holding prisoners of war, and the provincial park at Neys is built on an old POW camp site. There’s very little to show that up to 500 Germans were once incarcerated here, except for a few concrete foundations in the woods and a star of rocks where the flagpole used to stand.

There were escape attempts, but if they weren’t caught, the prisoners would always return after a day or so, bitten by blackflies and exhausted from getting lost in the bush. One German officer even tried to skate across Lake Superior on boot blades fashioned from an old bedstead, but he soon returned like the others. Camp life was fairly relaxed, after all, and the prisoners were well taken care of. Most escape attempts happened once the war was over and the Germans didn’t want to be returned to Europe. Some even settled later in the area.

The curator at Neys provincial park, Teddy Dong, is looking for people who may have memories of the camp to record a verbal history. If you can help, send him a note at teddy.dong@rogers.com.

SOMETHING DIFFERENT … (White River) This town used to hold the record for the coldest temperature ever recorded in Canada: 72-below Fahrenheit in 1935. That’s 58-below in Celcius, which is way too cold to think about.

The super-frozen temperature was spotted by 14-year-old Walter Spadoni, when he saw the reading on the thermometer at Rumsey’s General Store while on his way to school. School was cancelled that day.

Walter’s still in White River and I found him at the Home Hardware that his dad founded as a general store in 1905. “Winter’s not what it used to be – it’s a lot warmer,” he told me. “Our roads weren’t plowed, either, but we didn’t have cars, so it didn’t matter.” White River was a bustling railway town but didn’t get a road into the community until 1960, when Walter says he bought himself a Chevrolet to reach the outside world. 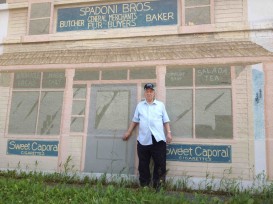 But town residents now question the lowest-temperature claim. “It’s an urban legend,” says Deb Duplassie. “It was cold enough to break the thermometer, and the mercury dropped to the bottom. We get our share of minus-30s and minus-40s, when it’s cold enough to freeze your nose hairs, but who knows what the temperature really was that day?”

And even if it were true, a reliable temperature was recorded of minus-81 Fahrenheit (minus-62.8 C) in the Yukon in 1947, disallowing the title. But White River doesn’t need it. Now it promotes itself as the birthplace of Winnie the Pooh – the railway stop where a bear cub was bought in 1914, named Winnie after Winnipeg, and taken to the London Zoo to become an inspiration for children’s author A.A. Milne and his son Robin. Which apparently is a surprise to most visitors, who assume Winnie the Pooh was created by Walt Disney.

SOMETHING FROM TRISTAN, 12 (Ouimet Canyon) Today was the most fun out of all the days so far because for the first time I actually got a good night’s sleep. 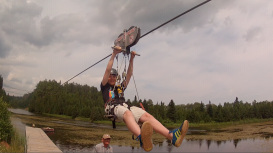 Also, we went zip-lining, which was just about the most fun thing I’ve done in my life –  it wasn’t scary at all. It was actually quite nice because there was a light breeze on your face and the beautiful scenery of the canyon.

Now we get to sleep in a Best Western with two separate rooms, one for just watching TV and relaxing and the other for sleeping and doing even more relaxing.

Overall, today was the best day of the trip and I don’t think that anywhere else can beat it, so good luck anyone who is up for the challenge.