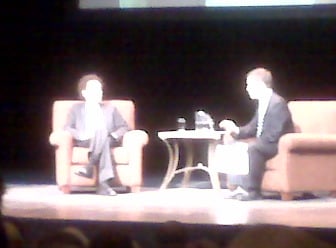 And so to the NAC this afternoon for a “conversation” between Malcolm Gladwell and Ottawa Citizen columnist Mark Sutcliffe, hosted by the United Way. Despite the rather incovenient time, Southam Hall was nice and full, and without much ado Mark and Malcolm walked out, sat in a couple of oversized comfy chairs, and got down to talking.

I have to confess that for the first 20 minutes or so, I was dead bored. They started out talking about homelessness, riffing off Gladwell’s story of Murray Barr, the homeless man who was single-handedly costing the city of Reno a million dollars or so a year, thanks to visits to the hospital and other social support institutions. Interesting enough, but it went on too long and degenerated into some rather aimless speculation about why we can’t help everyone, and how sometimes our political principles will be at odds with our practice.

Things picked up after that, and for the most part the conversation roamed over themes and ideas from Gladwell’s latest book, Outliers: success, and its relationship to circumstance, luck, hard work, and culture. I was surprised at how funny and engaged Gladwell was; when I’ve heard him before, he’s come across as aloof and a bit cold. But he seemed to be enjoying himself today. He also got into some good panders to the audience, especially when he commented that while he lives “among” Americans, he isn’t “of them”. That got a big cheer; at least Sutcliffe called him (and the crowd) on it.

In the end though, I was left with the same sense of admiration, but also the same gnawing frustration, that I get from reading Gladwell’s books and essays. At his best, Gladwell takes ideas from academia – mostly psychology and social research — and packages them in insightful examples wrapped in brisk, direct prose. The stuff I liked most today was his discussion of the way inner-city KIPP  schools (Knowledge is Power Program) achieve the successes they do by largely working the kids to the bone; it reminded me of the excellent journalism Paul Tough has done on the Harlem Children’s Zone. On the other hand, Gladwell is at his worst when he freelances his own theories: the “temporary autism” hypothesis from Blink is an outrage, and his thesis that rice agriculture is the basis of Asian success in math and science is one of those things that is interesting if true, but probably not true.

Too often for comfort though,  Gladwell slips into a intellectual mode where he states  truisms and generalities in a very earnest way, that makes it sound like he thinks he’s really on to something. Yes, the example of the girl’s basketball team from San Francisco that made it to the nationals by working the full court press is interesting, but when the take-away message for the day is  “success is hard work plus luck,” it leaves you wondering whether time might be better spent.

This review of the event sounds more negative than it was. Mark and Malcolm had a good banter going, and if the enthusiastic reaction of the crowd at the end is any indication, the world of ideas could use more people like Gladwell. Were you there? I’d be interested in hearing what you thought.

PS: it was worth it just to discover that Gladwell has turned his hairdo into his brand: 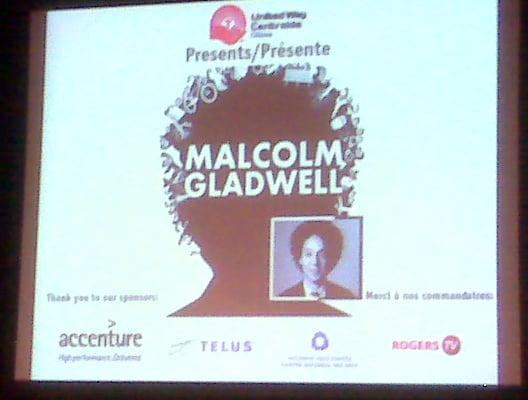