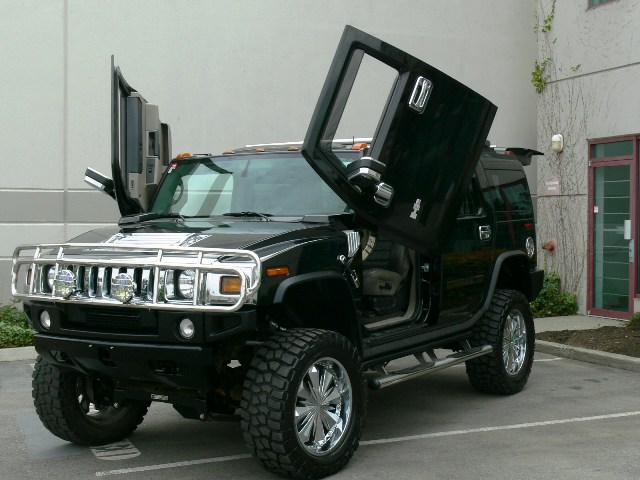 There’s never been a worse time to try to sell a used Hummer. On Wednesday the New York Times Wheels blog looked at the deluge of Hummers available on Craigslist, and the steep price cuts sellers are having to swallow in order to unload their 3-ton, gas-guzzling beasts. Now the B.C. government is trying to sell a tripped out Hummer that police seized from a Vancouver Island drug dealer. And judging from the auction so far, it’s not going well either.

As the picture shows, this ain’t no typical Hummer. According to a press release, the 2003 H2 has “Lamborghini-style hydraulic doors, a $16,000 custom audio system with four huge rear-facing speakers, a navigation system, and TV screens mounted in the front headrests of its beige leather seats.” Perfect for those long stretches between drug deals in Comox and Duncan. Along with a second SUV, a relatively plain 2002 GMC Denali, the government pegs the combined value at $60,000 and says the money will go to support community projects.

Good luck getting that kind of dough. So far the auction (you need to register to see it) has garnered a top bid of just $20,600, yet according to a pricing calculator at VMR Canada an H2 with similar specs (not including the TVs, custom stereo and wigged out doors) is worth $29,375. There’s still 11 days left in the auction, mind you, so maybe there’s someone out there who doesn’t care that it’ll cost $140 to fill up the tank. Besides, when all those Prius drivers flip you the bird, you can be assured your money went to a good cause.