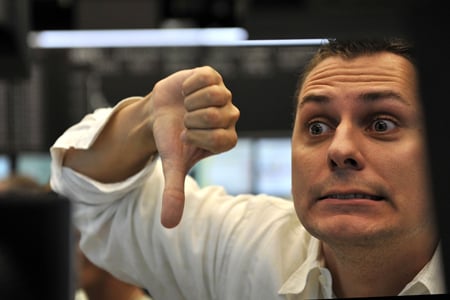 Stephen Harper and Jean Charest have to be glad they got their respective re-elections settled before the worst of the recession kicked in. If recent polls are any indication, both men appear to have dodged a bullet by going into elections late last year instead of waiting for the opposition parties to force them into one.

With the economy tanking Quebeckers, are in no mood for politics (and the politicians who play them). Support for Harper and the Conservatives is way, way down in the province according to two recent polls. This Strategic Counsel survey put the Tories’ popularity at a dismal 10 per cent and this Ipsos Reid poll puts it at a marginally better, but far from respectable, 16 per cent.

Despite cruising to a majority government just a few months ago, Charest isn’t faring much better in his home province. His government was never very popular to begin with, but he’d managed to get his approval ratings up above 50 per cent for the better part of 2008. But now, with the Caisse de dépôt’s losses hanging over his government like a bad stench, his numbers are back down to 38 per cent.

Recall that, in Harper’s own words during the last election campaign, there was no recession to speak of in Canada last fall. And as for Charest and the Caisse, people could only speculate about the amount of money the fund would end up losing. That is to say, neither election was fought on the issue that would come to dominate the early part of their government’s mandate. As Adam Radwanski points out over at The Globe, if ever there was a case to be made for fixed election dates, either of these two would suffice.