REVIEW: The scrapbook of Frankie Pratt 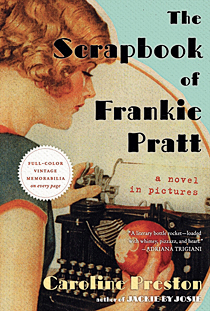 Pratt’s life should be familiar to readers weaned on novels by F. Scott Fitzgerald and Ernest Hemingway depicting the vivaciousness and vacuousness of the Jazz Age. She’s a small-town girl from Cornish, N.H., with lightning-fast fingers, bent on a career as a writer, as long as she can get through college at Vassar, living as a working girl in New York City, and adventures in Paris without ending up in too much trouble. Inevitably, Frankie finds some, thanks to a love affair that moves from inappropriately chaste, to adulterous, to simply doomed, with pauses for lighter-hearted romantic hijinks on both sides of the Atlantic before she finds the real thing where and when she least expects it.

Preston, who previously demonstrated her expertise with this time period in her 2006 novel Gatsby’s Girl, takes this straightforward narrative and weaves it through the motif of a scrapbook (the conceit is that it’s a high school graduation present from Frankie’s mother). In doing so she adds colour, vibrancy, and an idiosyncratic flavour to Frankie’s growth from girlhood innocence to complicated womanhood. Postcards from the 1920s, which Preston herself has collected for years, populate Frankie’s scrapbook and story, illustrating key events (being dropped by her college best friend and roommate, learning a secret about one of her New York beaus, hearing her doomed lover declare his love while her stomach rebels against an Orange Crush drink) with wry panache.

The Scrapbook of Frankie Pratt is a delight to read, the juxtaposition of period advertisements, report cards, and other memorabilia demonstrating the highs and lows of the 1920s. For Frankie, opportunity seems limitless, but it’s also inhibited by social mores, class boundaries, and the rules of romance. Nonetheless, far from being restricted, she soars, and it’s a pleasure to succumb to this confection and enjoy Preston’s literary collage.