How it took 21 bureaucrats to answer our simple question 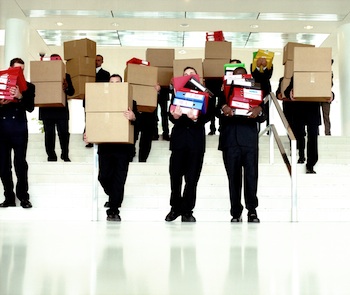 How many federal officials does it take to answer a few questions about a $500 grant for a tea party in Prince Edward Island in honour of the Queen?

According to e-mails recently released by the federal government under Access to Information, the answer is: 21.

Back in May, Maclean’s decided to write a small light-hearted story about the federal government’s $2 million fund for cities and towns to celebrate Queen Elizabeth II’s Diamond Jubilee.

Local media stories in Prince Edward Island highlighted the fact that the tiny province had been budgeted to receive $170,000, the second-largest sum in the country, behind Ontario. It was a surprising fact given that Prince Charles and his wife, Camilla, Duchess of Cornwall, hadn’t actually planned any stops in PEI on their Canadian tour.

The money included funding for some modest community celebrations in the province, such as $500 for the community of Clyde River to host a tea party for about 75 people and another $500 for the Town of Alberton to host a flag-raising and tree-planting ceremony.

The funding was hardly scandalous, but the question was, why did PEI get so much? Was it because other provinces weren’t quite as enthusiastic about the monarchy? Or did Canada’s smallest province just have the best proposals to honour the Queen?

We wanted to find out more about how the Jubilee money was being divided across the country and whether some provinces were asking for more than others.

The answers seemed fairly simple and had apparently already been made public in a report tabled in the House of Commons back in April, in response to a question on Jubilee spending by NDP MP Tyrone Benskin.

So on May 14, Maclean’s called Canadian Heritage, which was organizing the Jubilee funding, to ask for a copy of the report. We mentioned that we needed it by the end of the day, or early the next morning, in order to meet the deadline for the following week’s issue.

What ensued, as you can see here, was four days of debate involving nearly two dozen different bureaucrats, 74 pages of e-mails, and several layers of approvals and corrections.

• First, a media analyst labels the “anticipated tone” of the story to be “informative” and suggests the department should be able to meet the deadline. “Between you and I no need to ask for an extension,” he writes to a communications advisor. “Either today for 5 p.m. or tomorrow morning.”

• According to the e-mails, a parliamentary staffer was able to track down a PDF copy of the report within about an hour and mail it to the department’s communications staff.

Bu instead of forwarding it onto Maclean’s, communications staff proceeded to debate whether the report constituted public information. By the next morning they confirmed the report “is public and available to everyone,” but decided they should send Maclean’s to the Library of Parliament to get it, a process that entailed several more phone calls.

• After reading the report, which details how much the government expected to give to each province, but not how much was ultimately approved, we called back to ask a few more questions: How much money did each province apply for and how much did they receive? Could they offer a few examples of other smaller community projects in PEI that had been approved for funding?

• A media analyst suggested giving Maclean’s some information that had already been made public to other reporters, including the number of applications each province had submitted and how many of them had been approved. “Allow me to reiterate that we are being asked to respond by close of business day,” he writes.

Instead, department staff spent the next two days going over the numbers. The head of Celebrations and Commemoration Program worried that “there needs to be contexte [sic] provided, in that the figures presented were based on amounts requested, not approved, and were in flux (subject to change) as applications were processed” and that not all of the funding requests had been processed.

• By 3 p.m. on May 15, a day after the request, the department’s manager of public affairs e-mailed to see whether department officials had finished going over the numbers. “Update please?” she asks. “The deadline is close and we need to get approvals.”

• About 90 minutes later, the department had finally come up with a list. But the process dragged on throughout the day for what appears to be approvals by three separate offices, the Executive Director of Major Events and Celebrations, the Assistant Deputy Minister’s Office, and Heritage Minister James Moore’s office.

• A day later, during yet another round of approvals, a staff member from the Privy Council noticed that one answer — a description of a $500 grant for a community celebration in PEI — “appears to have been given twice, but with a different title” and required Canadian Heritage staff to review the information once again.

By 5:30 p.m. on May 17, Canadian Heritage finally provided us with all the answers — four days after we asked for it and after the issue containing the story had already hit newsstands.

An addendum to this story:

As it turns out, Prince Edward Islanders were indeed some of the most enthusiastic when it came to celebration the Queen, requesting $231,801 for Diamond Jubilee-related festivals compared to $186,666 requested by Alberta.

But almost every province and territory celebrating the Queen’s 60-year reign requested more from the federal government to than Ottawa had budgeted. B.C., for instance, wanted nearly $500,000 for Jubilee celebrations but got less than $100,000. Saskatchewan asked for almost $275,000 and received $60,500. Ontario requested nearly $650,000 or almost twice the amount the federal government had budgeted for the province. It ultimately received just $218,000.

Quebec and Nunavut were apparently the least excited about the Queen, both failing to ask for the full amount that had been set aside for them by the federal government.

*Footnote: As the federal government made pains to point out the figures here represent the first of two rounds of funding from Ottawa for Jubilee celebrations.