Once upon a time, George W. Bush was looking for a bipartisan consensus 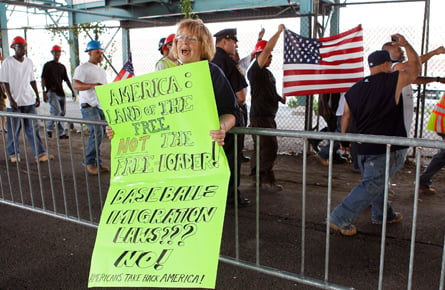 Last October, I had a public conversation with President George W. Bush in Montreal during which I had the privilege of asking him questions about his presidency. When I asked him what was his biggest disappointment, he answered without hesitation it was his failure to enact comprehensive immigration reform. Along with Republican Senator John McCain and the late Democratic Senator Edward Kennedy, he had tried to forge a bipartisan consensus to secure the country’s borders and develop a path to citizenship for anywhere between 12 to 20 million undocumented immigrants. Bush was in the latter stages of his presidency and the politics inside the Republican party made it impossible to reach a consensus on reform. The problem hasn’t disappeared. In fact, it has just gotten worse.

Enter Arizona. The problem along the Arizona border with active Mexican drug cartels soon transformed the debate into one about law and order and border security. The law enacted by Gov. Jan Brewer brought in stringent measures, including giving police a near-universal right right to round up illegal aliens. Just recently, a federal judge upheld most parts of the law, but blocked key provisions that could have led to widespread racial profiling. The battlelines have therefore been drawn between hard line Republicans who want to secure the border above all else and blame Obama for worsening the problem, and Democrats who see obvious political advantages in mobilizing the Latino and progressive voters pushing them to enact reforms.

The polarization is now more intense than ever. Facing a primary challenge from the far right, McCain no longer argues for comprehensive reforms and has joined the hardliners in Arizona. A recent political commercial closes with McCain telling an agent he’ll “complete the danged fence” along the Arizona-Mexican border. McCain’s friend, South Carolina Senator Lindsay Graham, has also left the reform camp and is now arguing in favour of amending the 14th amendment to remove birth in the U.S. as a guarantee of U.S. citizenship.

In the meantime, the picture presented on primetime news is not getting any prettier: protests groups are fighting one another in the streets; Latino political leaders and voters are splitting on the issue; opponents are organizing boycotts of Arizona; and other states are threatening to copy Arizona’s law. There is little promise for any bipartisan compromise in the near-future. The looming midterms have only reinforced the politics of confrontation and polarization.

To be fair, there are arguments on both sides that merit careful consideration. But the case for comprehensive reform is a clear one. It is more than a question of borders when over 12 million people are already in the country and most are law-abiding and productive citizens. As a Canadian who was taught that America’s strength and its grandeur had a lot to do with it being a nation of immigrants, the divisons emerging on this crucial issue are surprising—and, in some cases, alarming. This issue will test the American character as few others have in recent years. The issue is political and legal for sure, but it is also humanitarian. This ‘nation of immigrants’ will have to transcend the Democrat-Republican polarization, and reconnect with the lofty principles of its founders. It would help if their politicians could start by overcoming their partisan instincts and behaviour.