"I think they're quite proud of being Anglo Québécois and not just another Anglo from Minnesota." 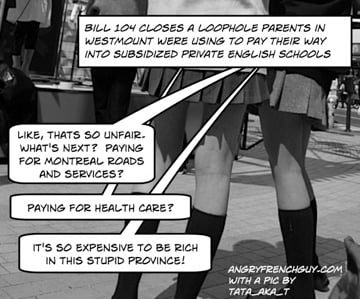 Recently, one half of Deux Maudits Anglais spoke with Angry French Guy (real name unknown) who writes a spiffy little Quebec issues blog from somewhere west of Atwater Avenue in Montreal. As the quotation above his blog suggests (bless you, Chuck D) he is about as angry as we are goddamned – that is to say, very. He recently recounted a lovely yarn that smelled of 1970s-era language politics: a Montreal car dealer who refuses to translate his website into French. Nice guy that he is, Angry wrote him a note in his impeccable English. Much hilarity, and a complaint to l’Office québécois de la langue française, ensued.

Angry French Guy, welcome to Two Goddamned Englishmen. The other Goddammned Englishman, who is actually French (it’s a long story) is either getting married, or is drunk, or both, so it’ll just be you and me. What’s your story?

The usual: a Kenyan father, a childhood in Hawaïi and Jakarta, an Indonesian Muslim stepfather…

Actually, more like an anglicized Francophone father and a Francophone mother, both from NDG. I went to school in the future (École Secondaire Saint-Luc, the most etnically diverse school in Québec, christened “The Québec of Tomorrow” by the media) and spent my summers in the past (The Royal St. Lawrence Yacht Club in the West Island. They had a picture of the Queen.)

But enough about me. Who are you and how did you end up working for the dark side of Canada?

Funny you should ask. I’m half German, half Lennoxvillian, and only left Quebec long enough to love Sackville, New Brunswick and hate Toronto.

You recently recounted your run in with a Montreal area car dealership whose website was only in English. You mentioned that you lodged a complaint with l’Office québécois de la langue française. The OQLF has a wretched reputation outside (and, in some circles, within) Quebec. Given your experience, how important would you say it is to have such an organization in this day and age?

To paraphrase Winston Churchill, it’s the worst possible way of protecting the rights of French speaking consumers in Quebec, with the exception of all the others. As one commenter on my blog pointed out, there was a time when such a dispute would’ve been settled with a fist in the face. I wrote an email to the car salesman telling him that his English-only website made me feel, as a Francophone, that my business was not wanted, and he replied with an insulting letter calling me an ignorant pigheaded fool. Thanks to the OQLF my anger was channeled into the all-consuming black hole of government bureaucracy and never came out. How is that a bad thing?

But tell me, you say the OQLF has a bad name outside Quebec but, as far as I know people outside (and even inside) Québec don’t have the slightest idea what the OQLF is, does or how it works. Unlike me, Ted Rogers pays you to check your facts. What do you think?

Oh, come now. You really think that most people outside of Quebec don’t have an inkling about the OQLF? It enforces la chartre de la langue française, among other things, which I seem to recall made a few headlines at some point (hint: the chartre helped trigger one of the larger demographic shifts in recent Canadian history.) Hell, Ted Rogers probably knows a bit about the OQLF (I’d ask, but he doesn’t return my calls.) That isn’t to say the ROC knows everything the OQLF does, but wholly ignorant of it? I disagree completely.

But we’re getting off topic. What is your impression of Anglophone Quebecers today, as opposed to the bad old days of yore? In other words, do you find that people like your used car dealer are the exception, or the rule?

Remember how easy it was for a little Bishop street pub to organize a St.Patrick’s Day PR campaign mascarading as a civil rights movement just by evoquing the OQLF last spring? It didn’t matter how many papers The Gazette’s Don Macpherson, The Toronto Star’s Mark Abley or my man Fagstein wrote to warn that, just maybe, there was demagoguery in the air, the whole world lapped it up: Language Police Remove English Signs from Montreal Irish Pub. How many people know that the signs are still up and that they were legal all along? This would not have been a story in the first place if people knew what bill 101 actually does.

About the Anglo Québécois… I don’t know much about the Anglos of yore, although I’ve heard they were all very wealthy and might have been involved with eating babies.

Today the Anglo-Québécois are cool. They make it a point of switching back and forth between French and English, tsé? Making sure everybody knows they’re in the know, part of the in-group. I think they’re quite proud of being Anglo Québécois and not just another Anglo from Minnesota. The problem is Francos and Anglos live in almost completely segregated societies until they’re 18 and move to the Plateau. The whole idea of separate schools, universities and hospitals is just bizarre. It confuses the hell out of immigrants and discourages bilingualism by making it so easy for people to just stay in their own comfort zones. I know it’s not the children of bill 101 who are not able to serve me in French downtown.

What are people saying about French Canadians at the Fairview Pointe-Claire these days? Do we still carry the stigma of Hérouxville?

I haven’t a clue, but your inference, that Pointe Claire is some sort of change-resistant Anglo stronghold, is telling – and wrong. Yes, Pointe Claire is the fabled home to much of Quebec’s Anglo gentry, and I’m sure lawn bowling is as popular as ever. But here’s the thing: according to the most recent Statistics Canada census, 22 percent of Pointe Claire’s population is Francophone, and nearly 70 percent of the population is bilingual.

Separate universities you say? Nearly 20 percent of the students at McGill and Concordia are French Quebecers. Even Bernard Landry was impressed. When I interviewed him last year he said he was thrilled with the strides McGill has made over the last 15 or so years in integrating French into its programmes, as well as its efforts to recruit French Quebecers into its ranks. (Two of the school’s five VPs are French. This would have been practically unthinkable 30 years ago.) And speaking of Landry: the erstwhile sovereigntist premier himself teaches at Concordia’s John Molson (!) School of Business – entirely in French.

On a personal note, I went to a very swishy English private boys school that, back in the day, was more British than the Queen. Today, students entering that very school in kindergarten spend 70 percent of their time in French until grade two, and 50 percent until grade six, and have daily French instruction for the rest of their years (provided they can afford it, of course.)

My point is this: old stereotypes are awfully boring, and often wrong. Trading in them is futile. But anyway. Why so angry, Angry French Guy?

Please don’t assume I an ignorant about English Montreal because I’m French. My dad was the president of McGill’s Cercle Français back in the day, I am quite familiar with the West Island and I have never lived east of Atwater. My family’s been going back and forth across linguistic lines for generations.

You proved my point. If English kids spend 70 percent of their class time in French and since the majority of Francophones wish their kids were taught better English, it’s quite obvious they should just be going to the same school!  French Quebec made its bed on this issue 30 years ago: one single primarily French school system for all, regardless of language spoken at home, religion or origin. Who’s the second system for, exactly?

Always nice chatting with you, Angry French Guy. It is a privilege to discuss one’s differences with another by way of a keyboard. To paraphrase someone more quotable than I, such disputes were once settled with a fist in the face.

It was fun. Mazel Tov to the other Anglais and if Ted Rogers ever returns you calls, tell him he owes me money.