If you have neither the facts nor the law, pound the table 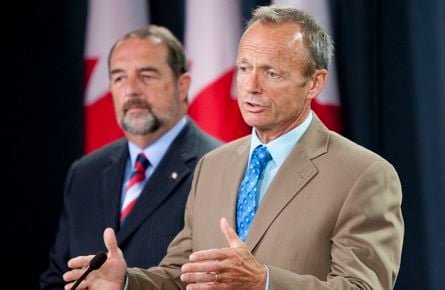 Stockwell Day held a press conference Tuesday to talk about the economy and the belt-tightening efforts that are apparently underway in Ottawa. Somehow, this got derailed into a discussion about crime rates—both real and imagined. Witness the rhetorical carnage that results when facts clash with ideology:

The crime rate per thousand, though it has gone down, thankfully, and I think some of that is because of the large amount of resources we’ve put into some areas of preventative criminal justice issues — for instance, targeting individuals at risk, families at risk, communities at risk — there’s been a lot of resources put into preventative programs there.  When you still go back and do crime rate comparisons going back even as much as 40 years, you still see that our crimes per thousand of population are very high, still much higher than they were back as reported in the ‘60s.

Here, in a nutshell, is the bind in which the government finds itself when proposing stiffer sentences at the same time as crime rates are dropping. The harsher sentences have to be justified: “We’re very concerned about the increase in the amount of unreported crimes that surveys clearly show are happening.” But there’s credit to be taken for the very decline that threatens to make those stiffer sentences anachonistic: “I think some of that is because of the large amount of resources we’ve put into some areas of preventative criminal justice issues.”

The solution, it appears, is to be sufficiently vague in recalling the crime rate of days past: “…do crime rate comparisons going back even as much as 40 years, you still see that our crimes per thousand of population are very high, still much higher than they were back as reported in the ‘60s.” Well, if we take murder for example, it’s not clear that’s true. The homicide rate, as the Ottawa Citizen‘s Glen McGregor has helpfully put into a chart, is in fact roughly the same as it was 40 years ago, and is down sharply from its mid-70s peak.

But then, as Day points out, that’s the problem with crime data—it’s based on voluntary (*ahem*) reports :

One statistic of many that concerns us is the amount of crimes that go unreported.  For whatever reasons, people simply are not reporting.  Those numbers are alarming and it shows that we can’t take a liberal view to crime which is that it’s – some would suggest that it’s barely happening at all.  We still have situations, too many situations of criminal activity that are alarming to our citizens and we intend to continue to deal with that.

It was Sun Media‘s David Akin who prompted the final bait-and-switch when he pointedly asked: “Is that like rape or assault or murder? Canadians are saying, ‘No, don’t worry about it, it’s okay?'[…]”

[…] David, in fairness, you’re taking it to the extreme, but certain crimes are unreported and that does have an effect vis-à-vis reported crime and we know that there are still serious criminal justice issues.  As I said, our emphasis on serious, repeat violent offenders, identity theft, some of the types of monetary crime, bank card theft and fraud where people lose their life savings, these type of crimes are very serious.  In the past we think that sentences have not been serious enough, that there’s been too much leeway and discretion in some cases left in the hands of judiciary where we want to see mandatory sentencing, where people who do commit these crimes — I itemized one type of crime for you in terms of the home invasions — where we think there should be some areas of mandatory sentencing to send the signal that we want our citizens protected and that we don’t think serious crime should be treated lightly.

So, let us follow the logic here: The problem with the current system is that it doesn’t punish crimes we’re not entirely sure are happening severely enough. That’s why the crime rate is so high, even though it’s not, but it would be if people reported all the crimes that are taking place.

(These unreported criminals may in fact be the same people whose continued freedom threatens the safety of Tony Clement’s anti-census Twitter friends Julius, Adam, Patrick, Paul, and Chris.)

For the record, according to our their Kady O’Malley (via an aide in Justice Minister Rob Nicholson’s office), the data upon which Day’s contentions about unreported crime are based come from StatsCan’s 2004 General Social Survey. I’m still trying to square Day’s alarm over six-year-old crime stats with this statement, made at the exact same press conference, regarding the census:

When you collect data on a five-year census, how reliable is it when it’s first one year old and then it’s two years old and then before the next census comes around you’re dealing with data that may be five years old which of course is untenable in today’s information age.

Martin posted about this issue last week, when he noted one of the newest Conservative senators had begun expressing reservations about crime stats that don’t conform to gut feelings. I guess it’s a talking point now.