I am a dog owner of insane commitment, but even I can’t turn a blind eye to the advances of research 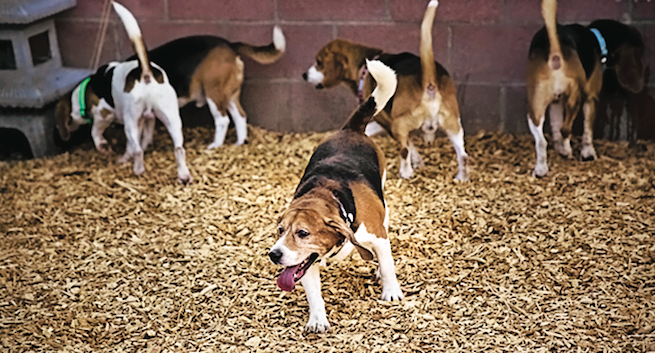 Beagles are dogs that are described almost universally as docile and aching to please their owners. Rather like me, I think, although my editors may disagree. These qualities make the beagle the dog of choice for medical experiments. Along with bunnies and mice, they spend their lives in cages with, inter alia, catheters inserted in various organs, kidneys blown up in toxicity tests, radiation that leaves skin, well, not exactly smooth like the shaved bottom of a show poodle.

The debate over animal rights versus animal research brings out some pretty sicko responses. University of Pennsylvania professor Joseph Bernstein writing in the Journal of Medical Ethics drafted what he called an “animal research advance directive” for all animal rights proponents. As he saw it, in order to be consistent, animal rights supporters should agree to do without all benefits obtained from animal research. Thus no cardiological care, no chemotherapy or surgery for malignancies, no radiation treatment, no vaccines for their children. Broken limbs to be amputated without pain medication, since both the fracture-fixation field and pain management—like the aforementioned fields—had been “contaminated” by animal research (largely dogs).

Professor Bernstein was evidently pleased with what he mawkishly calls his “modest proposal” but I think he’s an ass. I happen to be a dog owner of insane commitment, but with friends facing terrible and desperate medical conditions, I can’t turn a blind eye to the advances of research. Unlike Bernstein, neither can I ignore unnecessary or excessive suffering of animals. Some labs may care about their animals but give them very little quality of life, even though they are awash in protocols about cage size and sanitation.

Sanctimonious pronouncements of animal care committees and animal welfare acts melt like snow when faced with the sunny mantra that human lives are being helped. And perhaps human lives are, and I will want that medicine or procedure myself that was developed with the aid of beagles and so will your husband or son. But you don’t know. Because no one really knows how necessary or useful animal testing is. What we seem to know, according to essays such as those in the Royal Society of Medicine’s publication Laboratory Animals, is that quite often tests are poorly designed and use more animals than are needed.

How anyway does monitoring a beagle on hormones or chemo drugs tell us anything very accurate about side effects for humans over our much lengthier lifetime? Dogs can be poisoned by foods that humans tolerate and vice versa. Medical science says it works and I can’t say it doesn’t. Because thalidomide was tested on animals successfully but wreaked havoc with human embryos isn’t conclusive, since it was not first tested on the embryos of pregnant animals.

Kazuo Ishiguro’s acclaimed novel Never Let Me Go is narrated by Kathy H., a student at an English boarding school. All the pupils are clones, created purely to become “donors” of body parts until “completion”—death. Laboratory beagles are like Kathy H.—“purpose-bred” until death. Or at least that’s the response the huge pharmaceutical company AstraZeneca gave in January to a registered charity group called Beagle Freedom Project (BFP) operating in California.

AstraZeneca is closing animal breeding facilities in Sweden and an estimated 300 beagles were set to be transported to the U.K. The BFP hoped to re-house the dogs, as they have with more than 100 other ex-laboratory beagles. AZ wasn’t having any of it and responded with the “purpose-bred” justification and began shipping off the dogs to their facility in the U.K. AZ, a global company with facilities in Mississauga, Ont., has developed some wonderful drugs for cancer, heart disease, respiratory and gastrointestinal conditions, but they just didn’t see the point of not using up their hard-working lab dogs. In the face of such moral astigmatism, it’s hard to refrain from dreaming of AZ executives restrained in cages while having the Draize eye test administered.

Being “purpose-bred” doesn’t stop a dog from being a dog. The beagles may accept the endless gavages, the multiple surgeries and a life in which they never see outdoors, but their nature as a dog is not transformed. On Feb. 27, 10 beagles from a laboratory in the Midwest (BFP doesn’t name labs they work with in order to avoid publicity for co-operating companies) arrived in Valley Village in southern California. The dogs had travelled more than 1,600 km. The van stopped every three hours for a potty break but the dogs wouldn’t go out. They didn’t know what to do, having never been out of their cages except for medical procedures and examinations.

Videos of it are online. At arrival, the beagles are timid, unsteady on paws. Then, gradually, tails begin to go up, that characteristic beagle white tip starts wagging and shaky legs start walking, then jumping. “They were up all night long playing with one another,” said a BFP spokesman. Foster care and socialization will deal with fearful behaviour that drives lab beagles into corners or crouching under tables. “Most lab dogs have terrible teeth, skin infections. All of them have ear infections,” says one BFP organizer. “But we get them to vets before adoption.”

Pain, distress and death from induced tissue and organ breakdown are the normal trajectory for the laboratory animal. If we need them, and we probably do, we might give them a bit of solace toward the end, a few years of playful retirement—as good as that awaiting the mordant professor Bernstein.