In High River, the wait continues for flood victims

13,000 residents remain displaced, with no idea when they'll return

There was good news Sunday for many Calgarians, who got to return to their soggy homes in flooded areas. South of Calgary, in High River, Alta., the flood situation has become a waiting game for the town’s 13,000 residents, who have no timeline as to when they might be able to return.

My parents are among those displaced and — like thousands of others — they are waiting for answers from officials who don’t have any good news to give.

In a media briefing Sunday afternoon, High River Mayor Emile Blokland told reporters that a “huge body of water” still covers much of the eastern part of the town. He estimated it to be nearly “one-mile wide” and “three miles to the north.”

That body of water provided the backdrop as Blokland spoke to media on the southeast edge of town, flanked by Municipal Affairs Minister Doug Griffiths and Brig.-Gen. Christian Juneau. The water that remains after the Highwood River ripped through town Thursday is stagnant, a breeding ground for mosquitoes that swarmed overhead. Officials suspect it is contaminated with both sewage and fuel. “I’m serious, don’t touch the water,” advised RCMP Staff Sgt. Brian Jones.

While residents wait for that stagnant pool to dry up, and for the town to get essential services running, officials estimate there could be as many as 1,000 people still camped out in their High River homes, despite a mandatory evacuation order.

I grew up in High River, just 60 kilometres south of Calgary, and I know many of the kinds of people who would remain in their home, rather than heed a government-ordered evacuation. High River is Wildrose country, a provincial riding where many share the same right-of-centre values as their MLA Danielle Smith, the Wildrose Party leader who advocates for smaller government and the rights of property owners.

The mayor and Griffiths urged the residents who are still in town to get out and to do it now.

While streets in the west part of town are beginning to dry, the entire town remains under a mandatory evacuation. RCMP are posted at each road into town and more than 300 soldiers patrol the roads in light-armoured vehicles. No one is getting in, and anyone who gets out won’t make it back in again.

Minister Griffiths was less diplomatic than Blokland when describing those remaining, saying the residents are “being selfish and they’re being ignorant of the realities.”

RCMP are going door-to-door with military members — using locksmiths to open doors when needed — and are urging anyone they find to get out. RCMP can arrest residents, but “it’s not a path that we want to go down,” said Blokland.

While the news remains bleak in the short-term, there are stories of hope amid the devastation.

About a kilometre outside of High River, Ken and Deborah Harrison pulled debris from their fence on Sunday afternoon. The pair lives less than a kilometre from the river, but built their country home on a slight hill. 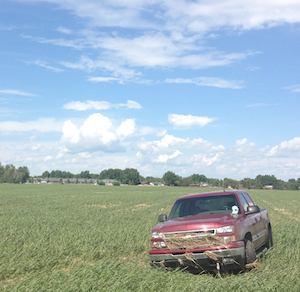 They barely escaped the rising water around noon Thursday and feared the worst, only to see a picture of their home — perched on a green island in a sea of brown river — on an aerial shot on the evening news Friday. They returned to find everything intact, aside from a pile of branches and muck on their lawn. “Build higher than you think you should,” Ken advised.

In the field adjacent to the Harrison’s home, a red Chevy truck remains marooned. It stalled out in the rising water and was pushed approximately 50 metres off the road. Around the corner, a lime-green snowmobile was lodged in the mud on the side of the road and tiny silver fish flip-flopped in a puddle where the river ran through only days before.

There is some news for my family, too, however limited. I wrote on Friday that I wasn’t certain if the family home I grew up in was even standing. I can confirm that it stands, on street caked in muck and debris. One of my younger sister’s friends, one of the residents Griffiths may lump into the “selfish and ignorant” category, has remained in town. He took pictures of our family home and sent them to my sister.

Here is it, muddy in front, but still standing.

Like all the other High River residents, it looks like it could be some time before my parents find out what’s left on the inside. 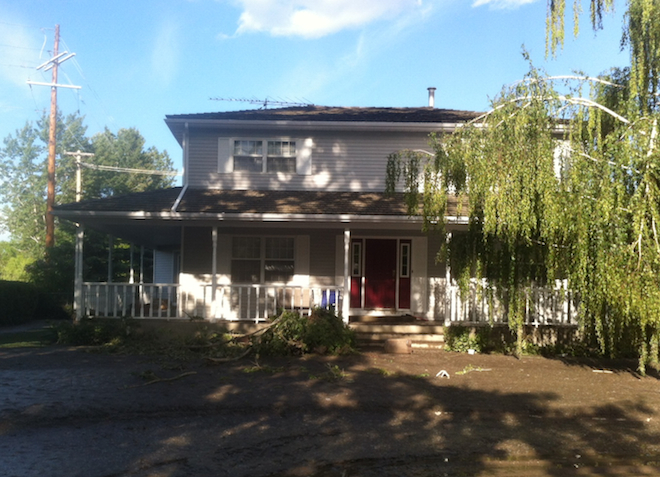