The world is going to the dogs

Forget about life, liberty and the pursuit of happiness. Just treat us all like dogs. 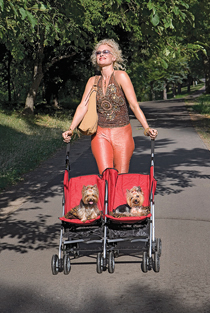 I have always wanted a dog. As a child I begged so long and hard for one that my parents (not dog people) finally caved in, and told me that if I could find a dog that cleaned itself and didn’t bark, I’d get my wish. So I found that dog: the Basenji hound hails from central Africa, makes a “low, liquid ululation” sound instead of a bark (says Wikipedia), and licks itself completely clean like a cat. My parents didn’t care. I got a guinea pig instead.

Since then I have grown increasingly bitter and resentful toward dog owners and animals lovers in general—for knowing what it’s like to have and love a pet who loves you back. It’s been particularly hard this spring and summer, because almost every week brings another human-interest tale in the news about the tribulations of people and their cherished four-legged companions.  Worse, the weekly deluge has been disproportionately tilted to the suffering of those animal friends, often at the hands of those who love them most. More than once we’ve been treated to the classic “hot dog” scandal (a dog owner leaving his/her dog in a  boiling hot car). As disturbing as the spectre of a flambéd Fido, though, has been the furious indignation that follows these events: it seems to the Canadian public the only thing worse than a child molester is a guy who leaves his labradoodle locked in the car on a hot day. If Old Yeller were written today, I’m beginning to think the title character would probably survive just long enough to give the little boy rabies, at which point a sigh of relief would ring out across the country: “At least they didn’t shoot the dog!” In fact, so tumultuous has been the indignation about pet abuse and so abject the sympathy heaped on four-legged companions, overheated and otherwise, that I’ve reached a new state of indignation myself:  I still love dogs; I just don’t like the people who own them.

Consider this recent Independence Day blog which appeared on the website of People for the Ethical Treatment of Animals (PETA). The subject was the great crime of chaining one’s dog up to a post/bench/hammock, specifically when one is putting some burgers onto the backyard barbecue. “Today, as Americans from sea to shining sea celebrate the founding fathers’ determination to be free from British rule by setting off fireworks and hosting backyard barbecues, how many of us will notice that some Americans remain in bondage—sometimes just a few feet from the grill?” Yes, Virginia, the Americans they’re talking about are dogs.

And what about cats? Do their owners fare any better when it comes to a terminal lack of proportion and/or sense of humour?  Sorry. A recent campaign created by the U.S.-based Lung Cancer Alliance—a group dedicated to lessening the stigma surrounding lung cancer predicated on the notion that if you’re a habitual smoker, you “deserve to die”—included a poster featuring a classic “cat lady,” along with the caption:  “Cat lovers deserve to die.” The idea was that it was just as arbitrary and unjustified to condemn smokers as it would be to target cat owners. Cat lovers didn’t get the irony. Assuming they were under siege, they tore down posters across the country and called in to radio stations.

The level of (often-misguided) reaction to these perceived slurs against pet owners and their pets plays up one of the most disquieting features of pet worship: it often goes hand-in-glove with the tendency to sympathize with an ailing pet over an ailing human. What’s operating here is the “cute factor”: the cuter something is, the more inclined we are to pity it. Take my auntie Debbie, for example. I love her very much, but her dog, Aurora, smells like a prehistoric wheel of cheese. She can barely walk up the stairs, and every few months a black carbuncle forms on her head, which she scratches off meticulously, only to have it form again in short order. If Aurora wasn’t a strawberry blond Labrador retriever with big eyes—if she were, let’s say, a human being—nobody would call her cute. Or let her lick their face. Or tell her that she’s still beautiful, even when she deposits a film of dead skin on your hand every time you stroke her.

Or leave her $12 million. Auntie Debbie hasn’t done this yet, and let’s face it, probably won’t, but Leona Helmsley, the New York hotel heiress known as “the Queen of Mean” did when she died in 2007. Helmsley cut her (human) grandchildren off completely but left the bulk of her estate, $12 million, to her Maltese lap dog, Trouble. A judge subsequently reduced the sum to $2 million, but when Trouble died a year ago this June, she was one of the richest pets to have ever lived.

I could go on about the gross injustice of it all, but I’d be missing the larger point: fanatical they might be, but pet owners prove that people are clearly capable of a tremendous amount of compassion. If only we’d exercise it the humane way. Forget about life, liberty and the pursuit of happiness. Just treat us all like dogs.