And a servile New Year 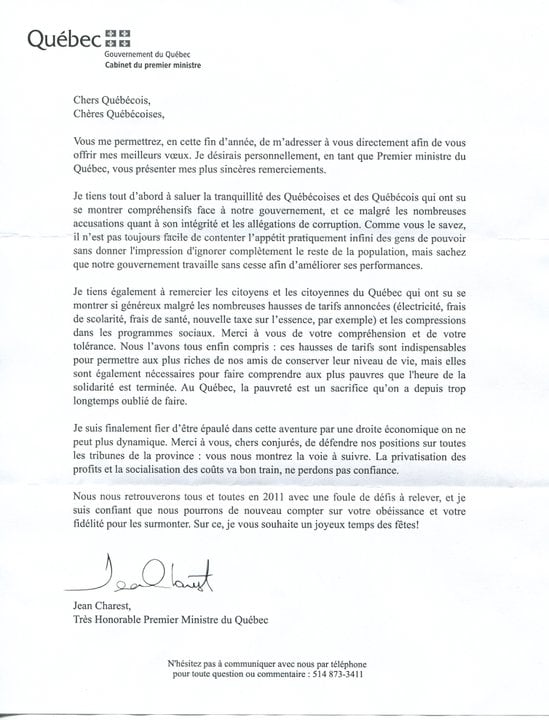 The official-looking letter I’ve posted above was sent out to Quebecers purporting to be holiday greetings from Jean Charest. As you can see, the letter is written on government letterhead, bears Jean Charest’s signature, and features the premier’s office phone number at the bottom. As far as hoaxes go, this is pretty well done.

That said, it’s the text of the letter that gives it away. It doesn’t so much mock Charest as paint him as a dark and venal man. And that seems to be the difference between now and Charest’s first few years in office, doesn’t it? Charest’s never been popular, but five or six years ago, when he was arguably as disliked as he is now, the Liberal leader’s political opponents mostly derided him as an incompetent buffoon. (Remember the ‘Destituons Patapouf’ campaign from 2004?) Now, he’s depicted as a sinister character, with greasy palms and an insatiable thirst for power and money. Frankly, I’m not sure which one is worse, though it’s worth noting Charest survived being ridiculed.

Anyway, here’s my translation of the letter:

If you’ll allow, as the end of year approaches, I want to communicate directly to offer you my best wishes. As Premier of Quebec, I wanted to personally offer you my most sincere thanks.

I want to first salute the tranquility of Quebecers, who have shown themselves to be understanding with our government despite the many accusations against it with  respect to its integrity and the allegations of corruption. As you know, it is not always easy to satiate the nearly bottomless appetite of people in power without giving the impression you’re completely ignoring the rest of the population, but know that our government is always working to improve its performances.

I want to also thank the citizens of Quebec who have been so generous despite the announced rate increases (electricity, tuition, health care, the new tax on gasoline, for example) and the cuts to social programs. Thank you for your understanding and your tolerance. We have all finally understood: these rate hikes are indispensable to allowing the wealthy to preserve their quality of life, but they are equally important to letting the poor know that the time of solidarity is over. In Quebec, poverty is a sacrifice we have neglected to perform for too long.

I am finally proud to be supported in this adventure by the defenders of right-wing economics who could not be more dynamic. Thank you, fellow conspirators, for defending our positions using every soapbox in the province: you lead the way for us. The privatization of profits and the socialization of costs is going well. Let’s not lose confidence.

We will find ourselves in 2011 facing a whole host of challenges, and I am confident we will once again be able to count on your obedience and your loyalty to overcome them. On this, I wish you a happy holiday season!