Jean Tremblay: Loony but not irrelevant

Even the Liberals are pandering to Quebec's Jesus-lovin' country mayor 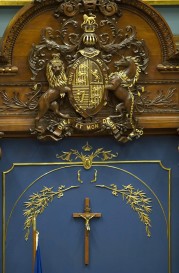 I was tempted to believe, as Antonia Maioni does in this morning’s Globe, that Mayor Jean “Yeah, I said it” Tremblay’s bit about having some Algerian-born foreigner type with a tongue-tying last name daring to dictate “French Canadian culture” as the ravings of an attention-starved, country-bumpkin crank. After all, the man is certainly as crankish as he is quotable. His previous claim to fame was being fined $30,000 by the Quebec Human Rights Tribunal for leading a public prayer before town council meetings. I interviewed him once, many moons ago, for a piece on the Canadian Council on Learning’s learning index. He was shocked—shocked!—to hear how Saguenay has come in dead last three years in a row, and had an interesting way of disproving it. “We have the best judo facilities in North America,” he said, in all seriousness.

So: he’s quotable, a wee bit loony, and apparently has a thing for very public self-crucifixion. Perfect fodder, as Maioni puts it, “a day of media attention and Twitter hysteria”—as brief as it is sad/entertaining.

But then I got around to reading the reactions of some of his fellow politicians. I saw how, in condemning Tremblay’s remarks, Péquiste candidate Pierre Duchesne made pains to note how Tremblay was a federalist. I saw how Trois-Rivièves Mayor Yves Lévesque said Tremblay’s remarks, while perhaps a tad too harsh, reflected a “silent majority” of Quebecers who don’t want to see their bleeding, prostrate, half-naked religious symbols taken down off any wall, thank you very much.

Finally, and most importantly, I saw how the Liberals reacted. Serge Simard, candidate for the Saguenay area of Dubuc, didn’t hedge one bit in his support of Tremblay. “He never misses an occasion to let his ideas be known and I think he really has a courage that many people don’t, to be honest,” Simard said during a press conference yesterday. Ditto Carol Néron, Liberal candidate in the neighbouring district of Chicoutimi-La Fjord; far from having to apologize, Néron said, Tremblay was “reflecting what all Quebecers think.” Not even Jean Charest, who can normally string together a quote about inclusiveness and tolerance and all that good stuff in his sleep, would outrightly condemn Tremblay’s remarks.

To get a sense of why, exactly, these very serious politicians are playing footsie with an apparently irrelevant, God-obsessed municipal politician from the sticks, you can only come to the conclusion that while he may be a God-obsessed municipal politician from the sticks, he certainly isn’t irrelevant. Immensely popular—he took nearly 80 per cent in his last  elections—Tremblay has been mayor of Saguenay for nearly 12 years. As such, he rules not only his roost but, when it comes to exposure, the media landscape as well: a 2009 Influence Communication study noted how he garnered nearly as much media exposure as Quebec Mayor Régis Labeaume and Montreal Mayor Gérald Tremblay.

People may roll their eyes when they hear him, but apparently many are listening. So it’s no surprise that Simard, Néron and Charest nonetheless wouldn’t mind a sprinkle of Tremblay’s xenophobic pixie dust—Simard, first out of the gate in his defense of Tremblay, especially. Simply put, the erstwhile junior minister for natural resources is in deep trouble. He won the 2008 election by less than 500 votes, and is running in a fairly nationalist riding for a federalist party that barely has the support of one in five Quebecers. Néron is up against Stéphane Bédard, a popular péquiste minister. Charest? He’s in trouble everywhere, be it de-souche types in the Saguenay or blue haired Anglos in NDG.

It’s a rare thing to see a Liberal pander to a man capable of such words. Normally, this is identity territory sacrosanct to the PQ or the ADQ, the previous incarnation of François Legault. That the Liberals would do so speaks to the depth of their problems and the undeniable power of a certain Jesus-lovin’ country mayor.