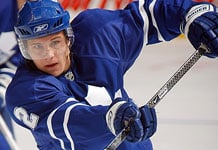 It’s a widely held joke across this country that Leafs fans view the world with rather distorted blinders. But this whole Luke Schenn love affair has gotten a little out of hand. There’s no doubt that the kid is going to be a stud in the NHL for a long time. Everyone can agree that he has the skills and desire to succeed. (His fight with tough guy Chris Neil on Saturday is ample evidence of that). Yet I think it’s a bad move to keep him in the NHL this year for several reasons. Firstly, despite the fact that he looks comfortable on the ice, his stats are brutal: zero points and a -3 rating through eight games. Secondly, the Leafs are going to go through some tough times this year–let me rephrase that, horrible stretches–and Luke would probably be better served to avoid the Leafs serious growing pains in year one of the rebuilding process. Thirdly, the Leafs have way too many D on the back end and are desperate to trade either Ian White, who hasn’t played a game because of the log jam and is thus difficult to move, or Carlo Colaiacovo. Carlo could be a star in the NHL if he just avoided the injury bug and was given some ice time. But Ron Wilson is convinced that this is the best move for Schenn and the club. Time will tell, but let’s pray this doesn’t turn into another Drake Berehowsky experiment. Last I heard he was playing for the Berlin Polar Bears.