Kicked while down, insulted while injured dep't 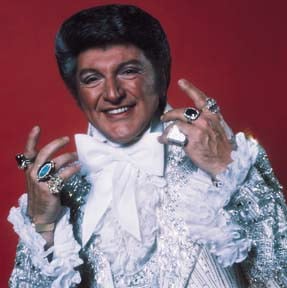 Maxime Bernier (not exactly as shown)

Poor, poor Max. It’s bad enough that his comeback special yesterday had all the class of an off-the-strip Vegas wedding –– all he needed was a velvet cape and some dry ice and… holy crap, that guy looks like Liberace! — but it came on the heels of Le Devoir‘s excellent Hélène Buzzetti-penned piece about how Max’s ‘Jos Louis’ charm initiative in Afghanistan was even more of a dud than originally thought.

He might be from the Beauce, but Max is a city boy at heart –perfect hair, nice cuticles, well-pressed shirts, all that. It’s hardly the stuff of Rick Hillier, to be sure, so someone decided that the then-foreign affairs minister he should man up in front of the Quebec soldiers. The solution? Operation Jos Louis. That’s right: by handing out Jos Louis, Quebec’s favourite blue-collar cakes, it was thought Max would suddenly grow chest hair in the eyes of Quebec’s fighting men. Much unintentional hilarity ensued.

Buzzetti’s story notes that procuring said cakes caused a serious kerfuffle within military ranks, as personnel scrambled to get 2185 Jos Louis cakes onto Bernier’s plane at the last minute. The cost? $972, plus $79.20 mileage for one enterprising Warrant Officer Marc Desgagné, who stormed the likes of Food Basics, Sobeys, No Frills and Wal-Mart in the mucky trenches of Trenton to procure the cakes. In retrospect, Max probably wishes Mr. Desgagné hadn’t shown such courage in battle.