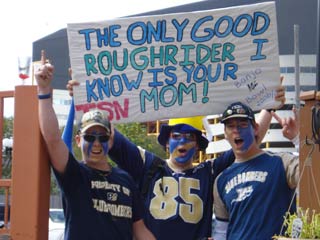 And they say Saskatchewanians are inbred

The Banjo Bowl, Saskatchewan’s annual tilt against the Winnipeg Blue Bombers , is normally worth the trip from Dauphin to Winnipeg, or the deck to the couch. This year, however, both it and its Labour Day prequel in Regina looked to be a bust. The Bombers had stink-stank-stunk all season, while the Roughriders seemed every bit the Grey Cup champs. Sure, they’d lost both head coach Kent Austin (to the U.S. college ranks) and starting quarterback Kerry Joseph (to the salary cap). But they were seriously cruising, stuffing opposing rushers and eating up ground yards like a combine harvester. If you’d roused me from my torpor in late July, I’d have told you the Bombers were sure to be the Bomb-ees in the battle Troy Westwood gave us. Better to watch the Antiques Road Show.

No more. The ground has shifted. The stars have re-aligned. The CFL funhouse has come back to life, as it always does in the fall. And if Winnipeg remains the longshot both this weekend and next, the game itself has implications for the rest of the season. Here’s why: as fans will recall, Kerry Joseph landed in Toronto after Regina decided he would cost them too much, which in turn ignited a QB controversy that almost had Bay Streeters paying attention to the CFL. Michael Bishop, a journeyman who sometimes seems capable of greatness, was supposed to be the Argos’ top pivot, having begun the previous season with an 11-1 record. Suddenly he was fighting for his job, and the soap opera dragged on all summer. Finally, last week, the Argos decided Joseph had won the bake-off. And just where did they find a home for our boy, Bish? … (remember, this is the CFL…) You got it. Saskatchewan.

So Bishop, unaccountably and improbably, is the Riders’ presumptive starter on Sunday, having supplanted the less-than-electrifying Marcus Crandell. He is not exactly taking over a well-oiled machine. Having jumped out to a torrid 6-0 start, the Riders have gone mysteriously cold in recent weeks, losing their last two and opening the gates to opposing rushers; they’re now just one win ahead of both Calgary and Edmonton in the West Division standings. And as everyone who has ever fashioned a football helmet out of a watermelon husk knows, those the Eskies and Stampeders meet this weekend in their own annual Labour Day classic.

So Labour Day looms large. If Bishop delivers, Saskatchewan preserves its two-point cushion. If he flubs—and many fear he will with all this pressure—the Riders are in deep sh**. They’ll have been caught by hungry western rivals, and they’ll be taking some seriously bad joss into in the autumn stretch. Grey Cup oddsmakers, sharpen your pencils.

Meantime, back in Ontario, the Argos face the Hamilton Tiger Cats on Monday in the East’s Labour Day extravaganza. Again, the Joseph-Bishop narrative dominates. Joseph must prove that the Argos faith in him was well-placed, because believe it or not, the hapless Tabbies trail the boatmen by just two points for second in the East. And if the Ticats start September on even footing with Toronto, their playoff prospects ain’t so bleak. Their star running back, Jesse Lumsden, and starting QB Casey Printers are both on the mend from injuries. Nothing breathes life into the Ivor Wynne faithful like win over the hated Argonauts. Oskaweewee.

So pop your corn and stock up your fridge, folks. The goofiest football league on earth is about to serve up some old fashioned fun—again. Think of it as a creaky ferris wheel, or a Barney Miller rerun. It’s not like you have anything better to do, or you would be doing it. Besides, who can resist a game called the Banjo Bowl?