Land mines in our sexual landscape 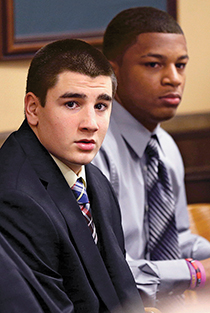 The rape convictions last Sunday of two teenagers in Steubenville, Ohio, the firing of CBC guest commentator professor Tom Flanagan for his comments on child pornography and the alleged grope of publisher and former Toronto mayoralty candidate Sarah Thomson’s bottom by Toronto Mayor Rob Ford share one thing. They are topics any sensible commentator must preface with ardent assurances that nothing with the possible exception of matricide could revolt more, and only abhorrence flourishes in the breast of the commentator who now feels compelled to address these matters. You have to say that or your licence as a pundit gets withdrawn amid truly vicious attacks.

In Steubenville, a bunch of high school teenagers got drunk at house parties and one of the girls ended up sans her clothes, of which there were not many to begin with, and no memory of how she got that way. This is a party ending that reminds me of my days living in Whitney Hall residence at the University of Toronto in the early ’60s, kitty-corner to the Zetes fraternity house, which specialized in drunken binges and the noisy smashing of bottles all weekend long. The girls wore more clothes, flip flops had not been popularized and, crucially, no such thing as cellphones and social media existed. But the end result looked much the same from my third-floor window.

The Steubenville boys behaved like many drunken 16-year-old males before them when faced with a 16-year-old female drunk as a skunk herself; in other words, they behaved appallingly. Next day, the girl couldn’t remember a thing except that she didn’t have sex as we once understood it. Teenage boys, often horrid beings, texted boastful messages about how “dead” the girl had been and one sent out cellphone photos of her naked. Three days later, the girl found herself the star of a particularly grubby online gossip session going viral.

In a normal society, the girl’s mother would have locked her up for a week and all boys present would have been suspended from school and their beloved football team. Instead we had a trial and media circus: two boys out of the many were declared juvenile delinquents guilty of rape (by inserting a finger in her vagina) with custodial sentences of a year each, one getting an extra year for distributing her photo. The boys go on a juvenile sex offender list. The girl could do with an alcohol abuse program while Steubenville clearly suffers from a shortage of parents in situ.

Turning to a local farce, I find it hard to envisage Sarah Thomson and Mayor Rob Ford addressing each other sexually. However, Ford allegedly had a lapse of incredibly bad taste and clasped the bottom of Ms. Thomson during a photo lineup at a party.This happened on the eve of International Women’s Day, which Ms. Thomson felt made it all the more degrading for her buttocks. Little matches the absurdity of this incident, but a close second would be the solemnity and chin-wagging of the CBC news panel who prefaced discussion with the usual disclaimer that this sort of behaviour was a “serious problem” and part of the spectrum of “sexual harassment,” a term invented in the 1970s that ought to have been strangled at birth.

Around 2002, publisher Thomson offered, using normal scatology, to “bed” my husband in return for him granting an interview to her newspaper. Though the proposition did not intrigue him, Conrad found it very enterprising and endorsed her for mayor in the last election. The same action that is generally welcome from a person you like is sexual harassment from one you don’t.

Professor Tom Flanagan’s valid observation to a group of students at the University of Lethbridge that criminalization of the private viewing of child pornography on home computers “is a real issue of personal liberty. To what extent [should] we put people in jail for doing something in which they do not harm another person?” was greeted with banshee shrieks. CBC News general manager Jennifer McGuire assured audiences that the CBC supported free speech and fired Flanagan. Alberta’s delicate Premier Alison Redford said the comments “turned my stomach.” I always thought rounding up people for what they privately watch on their computers was a stomach-churning breach of civil liberties far more damaging than the private contemplation of squalid pictures. The justification that without viewers there would be no market for child porn is accurate as far as it goes, which is about one millimetre. The same argument lurks behind the failed U.S. war on drugs and the failure of Prohibition. You cannot end a disease by arresting the infected.

Serious analysis such as professor Amy Adler’s “The Perverse Law of Child Pornography” in the Columbia Law Review suggests the unintended consequence of laws to protect children from sexual exploitation may be, contrarily, to promote their violation by a “dialectic of transgression and taboo.” The endless analysis of child pornography may do more to sexualize children than all the American Apparel ads end to end. Adler writes: “The legal tool . . . designed to liberate children from sexual abuse [constructs] a world in which we are enthralled—anguished, enticed, bombarded—by the spectacle of the sexual child.”

We have created an anything-goes sexual society: premarital relationships, same-sex and transgendered ones, teen contraception, abortions on government health plans without parental consent, a popular culture celebrating sado-masochism in books that have sold more than 60 million copies. No problem for me. But to compensate, we’ve hung our opprobrium on a few minor vices. Hence our grim, prune-faced horror if an adult privately views child pornography or pinches a bottom. This is low Victorianism: quietly murder your unborn child but put dust covers on your computer screen should a child’s photo arouse you. Beats me.

Barbara Amiel, you have demonstrated the most callous disregard for a young woman who was abused and traumatized. Shame on you #steubenvilleKim Rudd
Holy crap, Barbara Amiel. I mean… geez. And ugh.Darren Ridgley
I read Amiel’s column. I didn’t agree with it.Andrew Coyne
Barbara Amiel mistakes the Time Tunnel for the garbage chute; dives in anyway. http://<a href="http://t.co/gGmyBwfmJP" class="">j.mp/14qZlM6</a>Ivor Tossell
I’m going to pass on clicking on Barbara Amiel’s advice to parents of raped girls that they ground their daughters for a week, thanksBruce Arthur
I’ve half a mind to discontinue my @MacleansMag subscription, because they still let Barbara Amiel write for them.Eileen Watson
Inserting your finger into an unconscious girl’s vagina is just boys being boys, according to Barbara Amiel. So she’s part of the problem.Emmett Macfarlane
Well, I’m glad I’m not Amiel’s daughter.Nicki Doyle
This Barbara Amiel column, wow… just wow. http://www2.macleans.ca/2013/03/23/land-mines-in-our-sexual-landscape/Paul McLeod
Goodness gracious, Barbara Amiel. Those walls must be thick, and that moat must be wide. #steubenville #cdnpoliGerald Butts
OK, I think I’ve got it. Barbara Amiel’s column is a satire of Mad Men sexual mores and Ezra Levant’s Roma rant is a satire of Der Sturmer.Tom Hawthorn
But, you know what? If you think of Barbara Amiel as the inspiration for Betty Draper, it all starts to make sense.Lori Shenher
Barbara Amiel: the voice of a generation. Not this generation, or the one before it. Way back.Noah Love
Wait people read Barbara Amiel?mark d. jarvis
People read Barbara Amiel? Why??Duane Rollins
Not going to waste my time reading Barbara Amiel, got all I need from Twitter and my disgusted wife who did read it. @MacleansMag #HorridDarrell Winwood
someone help me unmad over this Barbara Amiel piece. Otherwise I’m about to get less constructive then normal and just call people screamingJohn R.
But I know everyone gets tired of the yelling, so I’ll save it for something more important than Barbara Amiel.Emily Dawn
@cfhorgan I can only assume that Barbara Amiel is jealous of hubby Conrad Black hogging the public loathing…Stephen Lautens
Disappointing Macleans would print such garbage! Wow is right! @pdmcleod:This Barbara Amiel column, wow… just wow. http://www2.macleans.ca/2013/03/23/land-mines-in-our-sexual-landscape/Jacqueline Roy
So here’s the thing. I am sorry that Barbara Amiel feels that society FORCES her to come out against rape. That must be so hard.Emily Dawn
How many more people are reading Barbara Amiel this week than last week, or whenever her column last appeared?John Gillis
Has nobody read Barbara Amiel before? People. This column is classic.Denise MacDonell
Barbara Amiel is a pioneer of trolling. Give it no more thought.Tabatha Southey
Is it safe to come out? You’ve all quit sniping about Barbara Amiel and done something sensible like pick up a volume of Shakespeare, yes?Andrea Janus
Just read Barbara Amiel in @MacleansMag. Wish I hadn’t. #disgustedDebi Winwood
Barbara Amiel should be grounded. Ugh. @MacleansCanadamarionetta
The Barbara Amiel column saddened me. So I pictured two pandas in a muskoka gazebo.Jean Valjean
Memo to Maclean’s: I can give you a list of scores of Canadian woman writers who are more deserving of a column than Barbara Amiel.Jeet Heer
FILED UNDER: child pornography Sarah Thomson sexual assault steubenville Tom Flanagan