Let him be perfectly clear

As promised, ITQ will be on hand as Team Mulroney makes its case for “clarification and direction” on the Commissioner’s recent ruling on standard of conduct. According to written submissions filed in advance of today’s hearing, neither Team Schreiber nor the Attorney General seem to be all that interested in giving the former prime minister, in the words of the latter, “a second kick at the can” on what should and shouldn’t be taken into consideration. 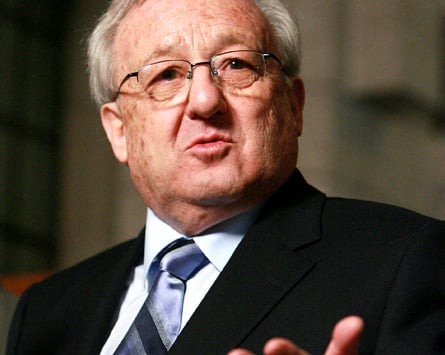 9:27:17 AM
Good morning, inquiry fans! Are we all ready for some rock’em, sock’em motion for clarification and direction action?

I hope so, because the court — or rather, the commission — is now in session. Up now – Richard Wolson, lead counsel for the inquiry itself, who tells the judge why we’re here today – not that this is news to him, of course, but that’s the protocol – and hands the floor over to Guy Pratte, who is – as far as ITQ can tell – the only attorney who will be providing an oral submission.

9:30:39 AM
Pratte begins by stressing what this motion for clarification is *not* — an attempt to stonewall the inquiry, since his client is more anxious than anyone else to put this whole ordeal behind him.

It’s also not an attack on the judge – after all, Pratte points out, he could have taken his case to federal court instead of bringing it back before the commission, but he felt this was the “appropriate” response. “The request for clarification has nothing to do with Mr. Mulroney trying to evade public scrutiny,” he stresses – or the laws of the country; it comes down to the inclusion of the ethics code, and to what actions it should or should not apply when the judge is “informed” by outside material.

9:38:13 AM
You know, Pratte’s presentation is starting to sound awfully familiar – it’s pretty much exactly the same argument that he made during the original hearing that led to Oliphant’s ruling in the first place.

9:40:04 AM
The judge finally speaks up, interrupting Pratte in mid-oratorical hop, to remind him – and the rest of us – that he actually knows far less about this particular case than any of the lawyers or otherses before him. He doesn’t know where his investigation will take him, so this whole question may be premature.

9:42:47 AM
A bit more back and forth between Pratte and Oliphant, this time on the post-employment code for public office holders and the guidance for witnesses and … I think I just heard the judge sigh. As Pratte notes that Mulroney would have “of course’ met the standards set out in the guidelines for ministers, he points out, somewhat drily, that he hopes so — after all, he wrote them. Yes, but as Pratte immediately reminds him, these were to guide ministers *while in office* — and *not* after the fact. Which is the crux, really.

If you’re not supposed to take advantage of your former office, Oliphant wonders, what does that say about lobbying the government? This rattles Pratte slightly, who dismisses that as something that will come out in the investigation — which, Oliphant cheshire-cats in response, is what he’s been saying all along. Pratte, however, is adamant that these are “not the same tests”.

The clarification they’re seeking is what standard will be used to assess Mulroney’s conduct after he left office.

9:52:16 AM
Having thoroughly explained and re-explained his position on timing and conduct, Pratte moves onto the second part of his argument, which is how the commissioner’s eventual conclusions on Mulroney’s conduct – or, presumably, anyone else’s, although Pratte reminds us that this is a “unique” inquiry, in that the object is a single individual – anyway, how it should be expressed in the final report.
Oliphant reminds him that this is one reason why it’s a good idea to include the Criminal Code as a reference — to make extra sure that no careless words find their way into the final report that suggest criminal wrongdoing, which is something this inquiry is absolutely constrained from finding. Full stop. Pratte looks intrigued, but plows on; he is determined to get his argument out even if Oliphant seems more than willing to argue — or clarify, I should say — each point as it is made.

9:58:24 AM
“Let me help you out,” Oliphant offers – again, just as Pratte is waxing profound and eloquent on whether the judge should, as suggested in his ruling, take certain provisions of the Income Tax Act, for instance. He reminds Pratte once again that he doesn’t know where the evidence will lead — he may need to consult the tax code to check the rules on voluntary disclosure, for instance. As far as Pratte is concerned, however, the evidence can’t be permitted to lead in the direction of investigating whether Mulroney was in compliance with the law, and Oliphant assures him, again once again, that he’s not going to go beyond the terms of reference.

“It’s interesting, you know,” the judge muses in Pratte’s direction, that the 1985 code of conduct states, outright, that simply following the code to the letter doesn’t “absolve” a minister from complying with *other* laws. Interesting indeed, although “with the greatest of respect”, Pratte argues that the reverse is also true.

You guys, I think this inquiry is going to be a lot more interesting – and, I suspect, informative – than any of us would have expected.

10:07:27 AM
Pratte putters along to a close – an earlier close than he expected, since the judge offers to give him a chance to respond to the Attorney General’s submission, rather than making him “argue into a vacuum” with a preemptive rebuttal. With that, he adjourns the hearing for a fifteen minute break. Up next – Paul Vickery, who will explain why the government doesn’t think any further clarification and/or direction is required.

10:18:16 AM
No, we’re not back yet, but I just wanted to get my prediction in under the wire: I don’t see the judge going for this motion — not based on his reaction to Pratte, and since Team Mulroney is alone on this one, I’m not sure what would change his mind between now and Thursday morning, when he’ll deliver his ruling. Hey, I was right last time, wasn’t I?

Anyway, I look forward to hearing from Vickery — there is definitely an intriguing subplot shaping up here, because the government – or, at least, the Attorney General – definitely doesn’t seem to be interested in doing any favours for the former prime minister.

10:26:03 AM
And we’re back! I wonder if I’m technically in contempt for berrying while all-rising? So far, I haven’t been the subject of judicial scowling, but maybe he hasn’t noticed.

Anyway, Vickery is up, and he gets right to business: unless there is real ambiguity in a ruling, any request to reconsider it – even under the sobriquet of clarification – should be resisted, to avoid any temptation to come back, over and over, with similar requests. If Pratte really wants the ruling to be changed or overturned, he can take the matter to court via application for judicial review, but he “has chosen not do that”. At least, for now – if I was a betting liveblogger, I suspect that may still be the backup plan. Pratte, according to Vickery, does indeed seem to be set on rearguing points that have already been decided. In other words, he doesn’t want clarification – he wants a do-over.

10:32:39 AM
Vickery goes on to address Pratte’s specific arguments in favour of his motion, pointing out how, in almost every case, they are identical to the arguments he made during the hearing on standards and conduct. There is “no necessity” for the judge to go further in explaining how he would apply the standards — especially since he’s already made it clear that he won’t “apply” them, but will simply “be informed” by them. He’s not assessing criminal or civil compliance; he’s looking at Mulroney’s conduct, and that’s it.

By the way, it’s the cutest thing: Vickery has an entire entourage of pinstripe-besuited junior Justice department lawyers, and when he’s at the mic, they’re all agaze, watching him with such implacable awe, while scribbling dutifully in perfect unison. It’s like the opposite of a Greek Chorus.

10:39:10 AM
As far as Vickery is concerned, the “appropriate” response to this motion would be to dismiss it; Pratte can then bring up issues on a case-by-case basis when the hearing gets underway.

That’s it for Vickery – and no questions from Oliphant. Schreiber’s lawyer, Richard Auger, stands up to tell the commission that his client sides with the AG.

10:44:07 AM
Pratte gets one more chance to plead his case – “You’re going to re-argue your argument that you’re not rearguing the motion?” Oliphant asks with some amusement – and seems just the tiniest bit put out by the suggestion that this is, indeed, just an attempt at re-kicking the same can. He can’t very well make a case for clarification without addressing the issues raised by the ruling, he points out.

Pratte then goes on to – well, not do *exactly* that; he reminds the judge that he himself agreed in a past ruling that it’s important that everyone knows the rules and the boundaries at the beginning, which is why he wants the clarification now, rather than seeking it on an ad hoc basis when the hearings get underway. He has cases to cite – lots and lots of them – on administrative law and clarifications.

10:52:40 AM
An interesting point from Pratte: since this is a commission, not a court of law, the options for parties are even more limited, in that there is no mechanism to appeal a ruling. It’s an appeal for judicial review, or nothing.

He wraps up his argument, and the judge gives a recap of the reasoning he first put forward last week on his decision to give an oral ruling on Thursday – whenever it would be most convenient for counsel, he assures them – so that it will be settled before the first public hearing on Monday.

With that out of the way, the commission stands adjourned. “See you on Thursday,” says A Senior Team Mulroney Official as he passes the media table.