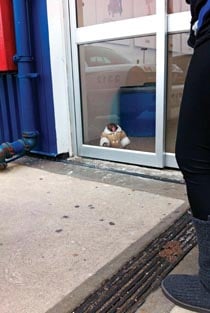 Personally speaking, I wouldn’t want a monkey for a pet although Darwin, the seven-month-old rhesus macaque captured Dec. 9 in a Toronto Ikea parking lot is appealing. Far more I might say than the live rat on the shoulder of a woman in Lake Worth, Fla., near where I lived once, who wore it every weekend. Unlike pet rats, pet monkeys are forbidden in Toronto. The city’s bylaws are numerous (183,000), with amendments electronically updated. If it’s chickens you want to raise or a tree cut down, the City of Toronto will say no or make it damn difficult.

Darwin has belonged to a Ms. Yasmin Nakhuda, a real estate lawyer, since he was six weeks old. She underestimated the opposable thumb primates share with us and so when her car was parked at a north Toronto Ikea, Darwin undid his crate, opened the vehicle door and went out. Along came Toronto’s famed animal control officers—famed in my experience for their total lack of empathy for animals—and took him away. Fair enough. You can’t leave a seven-month-old anything wandering about a parking lot in December, even though he did have his coat on. When Ms. Nakhuda came to claim him, she got a $240 fine and a form in which she signed away rights to Darwin. Big mistake. She claims they talked about criminal action and I am not entirely disbelieving. But when you lose a pet, you tend to lose a lot of other things including rationality.

Darwin has been relocated to a primate care facility called Story Book Farm outside Toronto which takes in such lost souls—monkeys who have been commandeered for lab research or just dumped by roadside zoos. Bravo to Story Book Farm. Nothing wrong with them using Darwin’s celebrity to raise funds—please donate. Still, Yasmin wants Darwin back and one can’t help feeling that a collection of traumatized monkeys on the mend is not necessarily a better home for Darwin than hers where he runs free like a family member. Ms. Nakhuda suggested Darwin choose but the judge who heard her petition, no Solomon he, put the case over to January.

To strengthen the rationale for this pet grab, parties at interest issued stern warnings. Rhesus macaques may carry herpes as well as hepatitis B. A particularly dirty shot came from the sanctuary’s lawyer, Kevin Toyne, who told the court there are concerns things have gone wrong with Darwin while in Ms. Nakhuda’s custody and “it would not be appropriate to leave the two of them alone.” This is typical of the protection racket run by those abysmal creatures promulgating and enforcing regulations. In the name of defending the victim—in this case Darwin—the sanctuary’s lawyer presents a seedy insinuation hoping for an investigation—essentially pure harassment. Story Book Farm now stipulates that Yasmin be searched on any visit to Darwin, accompanied by a police escort and prohibited from touching her pet.

The sanctuary put up a blog posting from Darwin: “I am so happy to finally be able to live and act like a real monkey!” he says, although a further posting, “I would also love to be able to play with toys and other enrichment items,” is not entirely compatible with that. Monkeys do not ask for “enrichment items.” Actually, no one does except OISE graduates and social workers. Nor is life behind bars in a cage any more like the home of a “real monkey” than Yasmin Nakhuda’s dwelling with her one-on-one attention and day trips for Darwin.

Darwin has been in touch with me too. He is utterly confused. Having been with humans since age six weeks, he has no idea what people are talking about, forcing him to “live like a real monkey.” Where are the bed linens and dining room table? He’s heard about the herpes virus and worries that it might ruin any chance of bonding with a lady rhesus—should that ever be available. When is he supposed to warn her of his possible condition? Do they take tests together? Nor is he getting a warm reception from the other macaques who, hearing of Toyne’s “concerns,” think Darwin may be a bit of a male ho.

Obviously a free community has the right to determine what fauna it wants within its borders. On the principle that adult rate-payers are human beings who can govern their own affairs, restrictions should be limited to ones necessary for the safety, comfort and enjoyment of all. I can’t fault a city that doesn’t want to chance anacondas and tigers as pets although the famous painter Endre Szasz who lived in Toronto in the early seventies kept an ocelot in Rosedale and the late “Baron” Von Heczey had a couple of cheetahs in his Toronto Annex home. Heczey was a six-foot-three, 250-lb. wrestler. Probably anyone smaller should not have wild cats.

Tiny monkey Darwin was at large, indicating a lapse on the part of his owner. Okay, fine her, move her (she’s just rented in animal-tolerant Kawartha Lakes, Ont., though newspapers claim a rush to pass laws there against exotic pets). But straightforward confiscation is crossing a double yellow line—made more despicable by sophistry claiming Darwin to be a wild beast and therefore the “property” of whoever has possession. I’d give Ms. Nakhuda one more chance.

Ms. Nakhuda’s desire for a pet monkey seems barmy but craziness is a human right provided no one is endangered or harmed. If we could devise sufficient tests for animals we’d likely find their mental function and intelligence higher than we know and consequently our own behaviour often cruder. Taking Darwin from the only mother he has known because of a bylaw is inflexible and cruel, the hallmark of a society that has lost its bearings, just like Darwin. His excuse is being only seven months old. What’s ours?