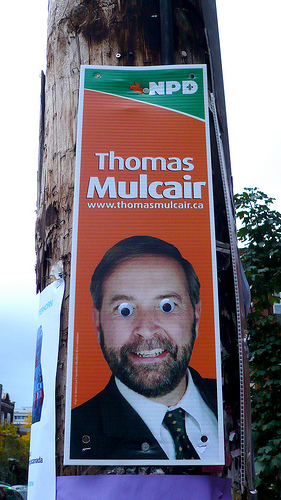 Chantal Hébert sicks her fingers in the NDP’s eyes today. She suggests that Canada’s conscience party has, over the last four years or so, lived a carrion-like existence in Quebec, picking away at the left flank of the the large, bloody, bloated [Ed’s note: that’s enough adjectives!] Liberal corpse for fun and electoral gain. It netted the party its first ever MP and a not inconsiderable heap of positive ink for Jack Layton. That the party was able to do so in Outremont, which is (wrongly) pegged as Montreal’s French Bourgeoisie Playground, was a PR coup for the proletariat.

But then, Iggy. Oof.

It’s funny; replace one aloof, gaffe prone professor with another and everything changes. Suddenly somewhat re-energized in Quebec, the Liberals are going to dump money and time into Outremont to do away with Layton’s pesky toehold for good. It’s the crux of Hébert’s piece: Layton certainly isn’t despised in Quebec. It’s actually worse; he’s respected just enough to ignore, like Joe Clark with moustache and bald head.  The two candidates most likely to run for the Liberals, Martin Cauchon and Sébastien Dhavernas, are both shoo ins (shoos in?) for the job: one’s a former MP and Liberal stalwart, the other is an actor. It doesn’t get any more  Outremont than that. Mulcair, the theory goes, was a fluke whose victory was a more a testament to Stéphane Dion’s irrepressible jackassery than anything else. There’s another problem for Mulcair, and its name is Jean Charest. The Quebec preem has taken an interest in the Ignatieff Liberals, and Charest really, really doesn’t get along with Mulcair. (This is why.) Toss in a likely cabinet position for the Liberal winner and you might think Mulcair is toast.

Except there’s a hole in that theory. Mulcair wasn’t elected by Outremont’s Toff vote; he, like MNA and freelance shoe-tosser Amir Khadir after him, rose to office by virtue of the other Outremonts, the ones populated largely by recent immigrants (Côte-Des-Neiges) and disaffected hipsters (Mile End). (Want to have the bejesus scared out of you? Get yourself an apartment on Lajoie and wait for Olivia Chow to come by the house in campaign mode. A buddy of mine is still recovering.) Since his election, Mulcair has been front and centre on just about anything NDP-related, in Quebec and beyond. You might say that he has supplanted his boss in the province. Layton might be able to ignore, but Mulcair certainly hasn’t been.

Hence the (*), above. Mulcair is in for a scrap, but it isn’t one he’ll necessarily lose.