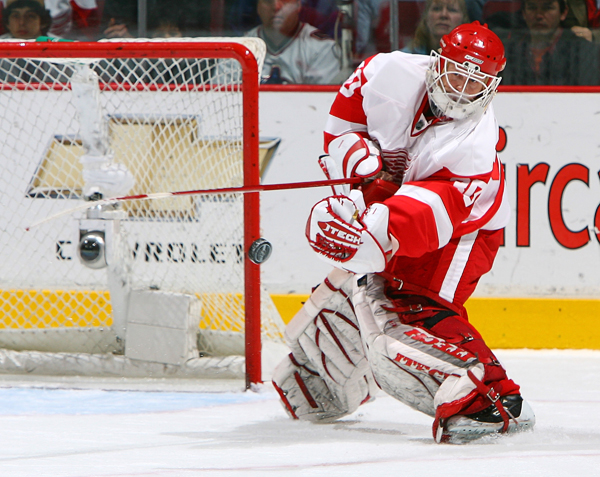 Sometimes those post-game quotes fail to capture the emotional undercurrent of a series. Luckily, we here at Balls are pretty wired with the big-league types. So straight from the inbox to you, dear reader.

Dear whoever the hell you are,

Listen, I heard some talk about “diving” after my masterful performance in Game 2 of the Stanley Cup final, and if I see my name in another Mitch Albom sobber I’m going to puke like Morrie on 222s. So I might as well vent on whatever this thing is, stedda whining to him again. Pay attention, kiddies, Grandpa’s got a story.

War is war, and back when I was fighting in the Boer War, we did what it took to win. So do I give a crap what Mike (Don’t Call me Michel) Therrien thinks of me doing the rainbow trout near the end of my second—read it, second—shutout of this Stanley Cup final? Ha! I’ll hit the ice until my ass is frozen if it gets me another gaudy, six-pound ring to wear to the Atikokan Open.

I guess old “Mike” missed the tape from Game 2 against Dallas. If he’d seen how a love swat from a pissant like Mickey Ribs sends me into a half-pike, he would have known better than to send Ryan Malone into my crease for a bit of late-game frottage. Then again, the whole league has been underestimating me, for my whole frickin’ 14-year career. That goes for my own team, even. Remember Hasek? Hall-of-Fame shoo-in who after living half his life in North America still talks English like a Czech-made AK-47? Where’s he now? And how about Not-so-Manny Legace, whom I seem to remember the TSN jock-sniffers mooning over a couple years back when he managed to stop the five shots a game Lidstrom let by to keep him awake? Legace was a nice story, but if you wanna see a real comeback kid, pop on Game 3 tomorrow night in Pittsburgh. If they do a close-up, you’ll be able to see the screws in my neck. Then I’ll stop Malkin on a breakaway.

Bitter? Do I sound bitter? Maybe that’s because all year long I hear nothing but Brodeur, Turco, Luongo, Kiprusoff. They flame out, and then we’re on to the young “phenoms” like Fleury, who’d own a house in Wilkes-Barre if he hadn’t been a first-overall pick. Or how about Price? That bible-thumping hick actually talked about following the footsteps of George Hainsworth, fer chrissakes. Then the Flyers lit him up like a Chez Paree stage light. I can only guess he’s back in Duck’s Ass, B.C., riding bulls and chawing Skoal.

Well listen up, Carey boy. I knew George Hainsworth. I went to pond-hockey school with George Hainsworth. George Hainsworth and I fought over the only set of cricket pads and smelting gloves to see who got to play in the 1927 final. You, sir, are no George Hainsworth. If I hear one more reference to a torch being passed, I’ll light a torch in your goalie pants. Just like I did to the gazillionaire EuroGrinch after he ran me out of Motown in 2001 (no, Dominik, that wasn’t McCarty, ha, ha, ha!).

So how about you guys gimme the credit I’ve been due all this time? Try looking past my Reggie Lemelin exterior and see the man behind the mask. The hard-boiled, nasty, butt-ending, diving, trash-talking, harder-to-kill-than-a-vampire Ozzie who won two Cups in this jersey and is gonna win another. I don’t expect a Gatorade endorsement. But I get another shutout, and maybe someone in this biz will toss me a bone.

Yeah right. That happens, and the next time you see me rolling around on the ice, I’ll be dying of shock.