Letters: "Emerson is but one huge hole in Canada’s border." 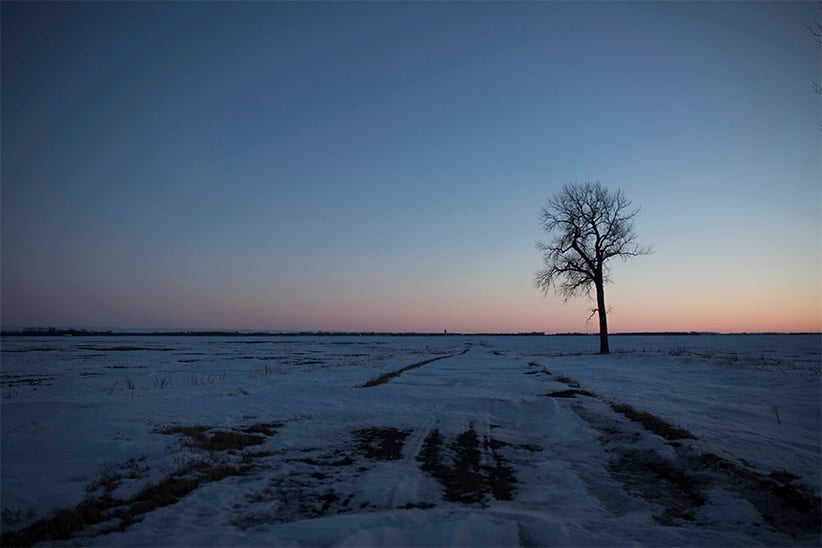 Looking south from farmers fields in Emerson, Manitoba, west of the border, known to be the most popular route for refugees on foot. (Photograph by Nick Iwanyshyn)

For the love of Winterpeg
“What does it say about Manitoba—the unbearable cold, mosquitoes, barely existent summers . . . ” (“Escape from Winterpeg,” Feb. 2017). Words certainly authored by someone in a Toronto tower or latte shop, for this is definitely not the way a Manitoban would describe life here. We embrace our winters, winters that have produced people who are disproportionately represented among the artists and thinkers Canada has produced. Our summers are full and glorious and long. And who cares about a few mosquitoes? Better them than the unbearable smugness and smog and rain of other unnamed parts of this country.
John Whiteway, Winnipeg

Quebec’s newest form of corruption
Several years ago, Maclean’s boldly proclaimed Quebec to be the most corrupt province in Canada. As expected, this provoked intense criticism from many Quebec politicians and citizens. However, there was also a good deal of support from Quebecers obviously fed up with the lack of ethics and transparency they had witnessed in the construction industry over many years. Ultimately, the Charest government bowed to growing pressure and initiated an inquiry (the Charbonneau Commission) which revealed a state of corruption greater than Maclean’s had intimated. Many charges, trials, convictions and prison sentences later, Quebec is the better for it. Perhaps it is time for Maclean’s and other journalists to now boldly declare Quebec to be “The Most Intolerant Province in Canada.”
Mark Roberts, Calgary

Rodeo’s NFL moment
Clearly, to bring back the gladiatorial contests in the Roman coliseum would not be sanctioned. Yet we persist in [allowing] sporting endeavours that mask similar fatal outcomes. When are we going to start charging the purveyors of such amusements with criminal negligence?
Douglas L. Martin, Hamilton

Fentanyl’s real victims
I am so tired of all the effort and time spent on this so-called fentanyl crisis (“Death, death–day in, day out,” Feb. 2017). What about personal responsibility? The message to recreational users should be: you’re playing Russian roulette. If you pull the trigger enough times, you’ll die. Addicts use up resources—fire, ambulance and medical staff—so citizens who have had legitimate accidents are left waiting for help. I do have empathy for those with mental health issues through no fault of their own. They should be housed for their own protection. But who are the real victims? The taxpayers who put up the money for Insite, naloxone and related resources.
T.B. Mortimer, Mission, B.C.

Christy Clark
In Nancy Macdonald’s article “Big money, big problems” (March 2017), she says, “Clark is widely expected to cruise to a second majority in B.C. in the coming May election.” She should try telling that to the hordes who chanted, “Hi ho, hi ho, Christy Clark has got to go,” on the steps of the provincial legislature at the opening of the session this February, and to the majority who defeated Clark in the contest for her own seat in 2013. It is time to get down to business: pay down the enormous provincial debt and deal with the worst child poverty rate in the country, the near-to-lowest minimum wage and some of the highest housing costs. Address the fact that B.C. is the only province with huge medicare premiums. And by the way, stop the lying about balanced budgets and a strong economy.
Carol Teichrob, Cobble Hill, B.C.

Canada’s Swiss cheese borders
Emerson is but one huge hole in Canada’s border. In Quebec and elsewhere there are plenty more. We’re getting willy-nilly uninvited, mostly unqualified, unwanted, unvetted “new Canadians,” despite our border controls and immigration laws. Why do we have huge immigration and border control staff and budgets if their services and results fall short of expectations?
Edmundas Petrauskas, London, Ont.

Selling seal
Canadians can hang their heads in shame at the mere mention of the seal hunt (“Deal the seal,” March 2017). No other country would ever attempt to promote dolphin leather or sea otter meat. Once and for all, let’s end the false equivalence that killing wild mammals is in any way the same as using domestic animals. Domestic animals exist as long as humans support them. Wild animals get along best when humans give them a wide berth. Bernie Halloran has lots of other choices—the seals, not so much.
Kurt Crist, Consecon, Ont.

Kale, geriatric hippie food fads
I have had enough of retired, geriatric hippies telling me that starvation and self-denial are the only way to control health problems and cure disease (“Baby want a kale salad?” Society, Feb. 2017). Canada’s Food Guide has been discarded and we are no longer allowed to be robust and strong. Food fads and fitness trends are not always healthy. Even Jim Fixx, the jogging advocate, died of a heart attack from overexertion. Vitamin C has always fought colds for me.
Catherine E. Stevens, Toronto

Thank you for some critical thinking in “Baby want a kale salad?” The fervour (and prestige?) for all things vegetarian and vegan is an adult choice for adults. When there is sloppy thinking and planning, no one eats well. Some parents don’t possess the knowledge of essential nutrients their babies and young children need. After the nursing period is over, is there consideration for the protein, calcium and vitamins needed for mental and physical growth? A few vegetables, fruits and a lot of carbs is a haphazard attempt to meet the physiological needs of children. Irreparable physical damage results when young children are malnourished.
Judy Birmingham, Sudbury, Ont.

Big-media bias
The March 2017 issue has unrelenting leftist views and an unbalanced view of the Trump presidency and the Conservative position. I have been a reader for about 45 years. Keep this big-media bias up and I’m gone.
Steve Locke, Niagara-on-the-Lake, Ont.

As a long-time subscriber and letter contributor, I was very surprised and pleased to go through the latest edition and note that it contains few negative comments about Prime Minister Trudeau. A most welcome change. Recall in 2009, when Maclean’s deemed an appearance by a piano-playing, singing prime minister Harper at a National Arts fundraiser in Ottawa worthy of a front cover, a lead article plus numerous pages and photos, to remind Canadians of this important event. While I have no illusions about the fact that you support the Conservative party, please continue with more balanced coverage.
Richard Ring, Grimsby, Ont.

Today, I received a copy of the “Student Issue” (March 2017) and it has the unmitigated nerve to refer to “Trump’s harsh new regime” on the front cover—directed at naive students. This is not objective journalism; this is pure liberal crybaby nonsense. The man has been in office for a mere 21 days and is already being pilloried? Regimes are known for being forceful, uncompromising and controlling—you know, communist, dictatorial. The only thing Trump has done is what he won the election to do. Many out there would do well to pay more attention to reality and stop making noises like spoiled children. This man is not a tyrant, he is head of a superb, well-balanced democracy that will keep him in check if need be. And that’s more than we can say about the Canadian parliamentary system where the prime minister has a great deal more power.
Andreas Schwartze, Nottawa, Ont.

Step up? To NATO?
Scott Gilmore had a great article regarding Canada stepping up to be great (“Trudeau, ‘Trump whisperer,’ ” March 2017). He lost me when his big idea was to expand our troops and defend NATO. How about making our national defence truly defensive, expand our troops to defend our North and let Europe defend itself for a change. We have enough work to do right here.
Rob Graham, Claremont, Ont.

Monster economy
Maybe I’m missing something, but it seems in your story (“Toronto’s monster economy,” March 2017) that every province and territory is represented as having a smaller GDP than the city of Toronto (except Ontario, which, of course, includes Toronto), but nowhere do I see any mention of Alberta. Last I heard we were still part of Canada.
Lawrie Seligman, Edmonton

Blind Halifax Explosion
It is quite incorrect to state that as a result of the December 1917 Halifax disaster, “So many people lost their vision that the city had to establish a school for the blind,” (“The luckiest man in Canada,” March 2017). The School for the Blind, a private institution, opened in 1871. The City of Halifax contributed little or nothing to relief and recovery after the disaster. An independent citizens’ committee, set up the very day of the explosion, took complete charge of emergency relief until superseded and replaced by the Halifax Relief Commission, established by the federal government in January 1918. The commission provided for many years a broad range of services to survivors blinded in the disaster.
Barry Cahill, Halifax

Refugees
The furor over MP Kellie Leitch’s vague proposal to have immigrants reflect Canadian values is a testament to political correctness trumping common sense. Instead of her ill-defined statement, we should simply ask would-be immigrants if they support the Canadian Charter of Rights and Freedoms. It is, after all, the law of the land.
Ron Armstrong, Victoria

On the cover of the March 2017 issue of Maclean’s, you state, “more and more refugees.” I find that the media, Maclean’s included, often use the term “refugee” incorrectly when they would be well advised to use the terms “asylum-seeker” or “migrant” instead. I urge you to go to the UNHCR website and read for yourselves what the term “refugee” really means.
Louis Barbeau, Victoria

Eat more goat
I have often wondered why goat meat has never been eaten by Canadians. It has been consumed in South Asia, the Middle East, the Caribbean, Africa and many other countries for centuries (“The best meat you don’t eat,” March 2017). If horse meat can be sold in Quebec, one hopes that in a short while goat meat becomes easily available in the supermarkets, as there is definitely a considerable demand for it.
Maria Jacob, Mississauga, Ont.