Letters: Canadians on our #2015in15words challenge 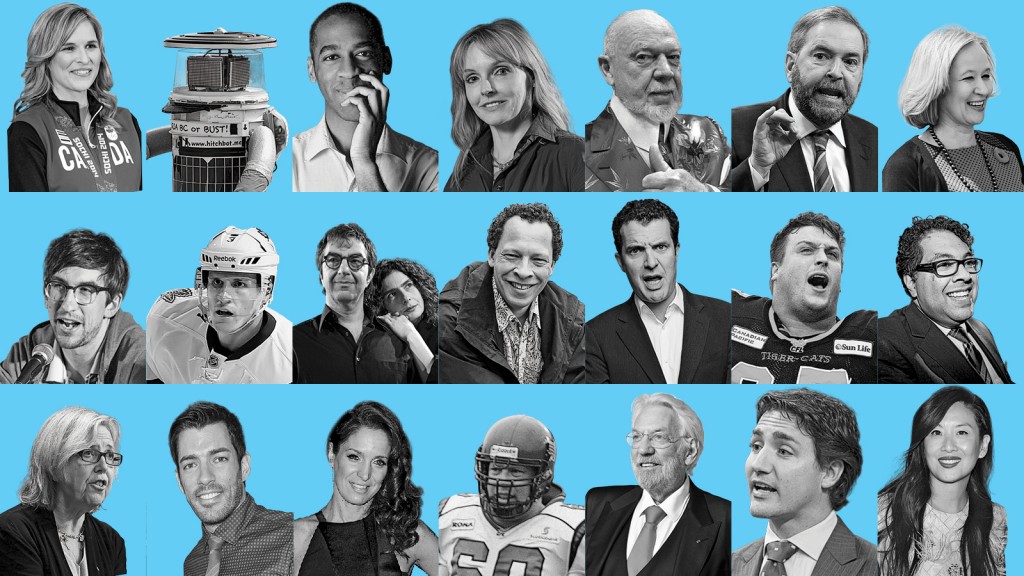 The “2015: The year ahead” was a great issue (Jan. 5). Seriously, the best was #2015in15words throughout the magazine. Enjoyed all the comments. Even Paul Wells managed to write an unbiased assessment and prediction of the upcoming federal election that was actually interesting.

I agree with Laureen Harper that Canadians should get outside and enjoy winter. However, before she straps on her snowshoes, she might want to have a word with her husband. Stephen Harper needs to know that climate change is real. Perhaps he could check with the polar bears and northern peoples who are rapidly losing winter as they know it.

I find it unsurprising that Maclean’s relies on its Rolodex of the usual gala-going suspects—Canada’s (ahem) elite—for thoughts on 2015. Too bad Pierre Berton and the entire cast of Front Page Challenge were not available for their thoughts, eh? My 15 words, not that you care: Alberta’s chagrined, Harper’s reined in, Ghomeshi gets tinned, the Leafs lose again and more taxes.

Here’s my contribution: That the homeless casual labourer be recognized, celebrated, broadcasted, congratulated for being resourceful, lionhearted, tenacious.

In a clear example of the partisanship and shortsightedness of much of the federal government leadership, our minister of industry, James Moore, misses an opportunity to be statesmanlike in 15 words. Instead, we look to Jennifer Jones, Heather Moyse and Dr. Robert Thirsk to remind us of how Canada’s freedoms, supports and opportunities make us the envy of much of the world.

The caption on your Jan. 5 cover reads: “Jian Ghomeshi destroys the CBC.” Thankfully, that isn’t true! No one person can destroy the CBC, which I believe is the main thread that keeps Canada united, connected and informed. CBC Radio, in particular, keeps people who live in isolated places from coast to coast, and in other parts of our world, informed. As a minister, it keeps me relevant. When I worked in isolated rural Alberta, driving from one church to another in my parish, I’d listen to CBC and feel connected. Ghomeshi’s decline is a relevant issue to our shared understandings of abuse, relationships and the voice of the afflicted. That is news, but, thankfully, the CBC is bigger than any one person.

Martin Patriquin’s article on the aftermath of Quebec’s Charbonneau inquiry into corruption (“Cleaning house,” National, Jan. 5) was good, but nothing will change unless steps are taken to expose corruption. It’s like cleaning with a feather duster: The experience can be a minor house-cleaning or a titillating experience for someone. To clean a house, you need to do a proper cleaning with a scrub brush and vacuum. Quebec and all of Canada must install a whistleblower-protection program at all levels of government and industry to prevent corruption, or at least expose it. Nothing else in the world has worked as well. Countries ahead of Canada in low-corruption rates (Canada stands at No. 10) have this in place: the Scandinavian countries, New Zealand, Singapore, etc. Honesty and integrity is what is needed.

I used the Uber app for the first time when I travelled to Ottawa recently (“Hailing a revolution,” Economy, Dec. 22). I found the experience quite enjoyable. The app was easy to use, the driver friendly and all details about my trip were available on my cellphone screen, even before I got in the vehicle, including driver and vehicle details, estimated cost, and anticipated route to my destination. Jonathon Gatehouse quotes Sajid Mughal, the president of iTaxiworkers, as saying, “If this continues, there will be 20,000 private cabs on the road.” Christine Hubbard, operations manager of Beck Taxi, states that “you can see all these cars running around out there on Friday and Saturday nights.” Really? If these are the worst-case scenarios that taxi representatives can come up with to try to dissuade people from using the service, all I can say is: Bring it on!!

Castration for the nation

Amid the splurge of concern about sexual assault these days (Letters, Jan. 5), no sensible solution to the trouble has surfaced and, yet, it is so simple! Get to the heart of the problem: testosterone. We need to reduce its potency, and surely there is medication that will painlessly create a measure of reason over the dangerous element in men. Before the caterwauling arises, let us remember that the medical profession has interfered with and adjusted many human aspects (such as prolonging life expectancy beyond the desires of most geriatrics and their caregivers) without encountering any divine annoyance.

I found your obituary focusing on the letter carrier (The End, Jan. 5) to be premature. The letter carrier is alive and well at Canada Post. Email has been around for years and, while it has resulted in people communicating differently, we all know how insecure the Internet can be: Just ask Sony. Some ads I’ve seen from companies wanting to email your bill have suggested that your mailbox is filled with only junk mail and that email solves that problem. Have you checked your email inbox lately? Daily, mine is filled with spam. Canada Post says the decline in letter mail isn’t going to reverse itself. I agree. But increasing stamp prices and decreasing service isn’t helping. If I owned a pizza shop and my business was decreasing from year to year, raising prices by 35 per cent and only delivering halfway to your house doesn’t seem like a solution that would help. Maybe I missed it, but has Maclean’s done an obituary for the journalist yet?

Not so wild about the idea

Jacob Richler (“Time to go wild,” Taste, Dec. 29) is correct that wild game ingredients are terrific and naturally organic. That is why foodies are one of the fastest-growing segments of the hunting and fishing population. However, Richler is wrong in suggesting all provinces should encourage the sale of wild game. Commercialization of wild game leads to abuses and extinction of various species. Remember the passenger pigeon?

From what I read and hear while I’m living temporarily in the U.S., President Barack Obama is not seen as a biracial man: He is a black man. He is, therefore, no more “ideally suited” (The Editorial, Jan. 5) to lead race-reconciliation efforts than abused persons are to lead reconciliation efforts with their abusers. As you state, it is white police killing black men and boys. To expect that he has two more years to accomplish something positive regarding race relations conveniently lets white people “off the hook.”

If Obama has not improved racial relations in six years, why would anyone think he might start now? He is busy stirring the pot. The polls tell us that race relations are worse than when Obama took office. Remember, he attended the church of the miserable racist Jeremiah Wright. You also don’t mention the terrible rate of black-on-black crime. The FBI stats from 1980 to 2008 found that 93 per cent of all black homicides were committed by other blacks. There is no police war on blacks.

Did I understand Scott Gilmore’s argument correctly (“Blissfully believing in ourselves,” Jan. 5)? That he thinks we are part of a giant video game created by a super-intelligent computer geek who existed long before us, who knows ahead of time our every thought and action and who could dispose of us of his own free will, to make us return again in some other dimension? Couldn’t that be God? It sure took us a long time to figure that one out, even as religions have been telling us essentially the same thing for thousands of years.

Jacob Richler is mistaken when he says that a claim of “organic” on a chicken “refers to feed, and is merely a good start” (“An old-fashioned game of chicken,” Taste, Dec. 22). The 2009 federal Canadian Organic Products Relations Act aims to ensure certified organic products are produced using sustainable management practices and ensures the ethical treatment of livestock. It covers processing of food, as well as packaging. Of course, what the animals eat is a top priority, but it is certainly not the only one.