Letters: 'We are destroying our civilization' 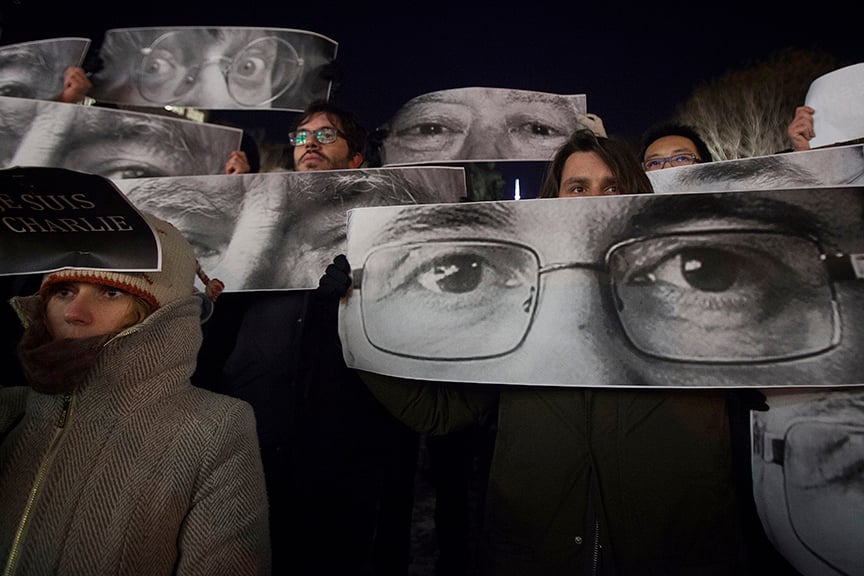 What world is that?

I enjoyed Scott Gilmore’s “Leaving the Muslim world behind” (International, Jan. 26). However, I’m not convinced that Islam, the Muslim world and Muslim nations/states are synonymous terms: The first is a doctrine, the second is a highly abstract classification, and the third includes varying geopolitical and socio-economic elements that cannot be generalized. The article simplistically links these highly complex concepts. It uses the term “Muslim world” in a way that can be highly misleading to the layperson, potentially reinforcing existing prejudices under a sweeping term that groups millions of individuals of virtually all ethnic and cultural (or national) backgrounds. It is unquestionable that the Paris shootings are criminal acts that call for unwavering condemnation. On the other hand, I don’t think this type of sensational commentary is responsible or constructive.

History has shown time and again that sidelining fundamentalists, instead of giving them a platform to legitimize their views, is the solution. We should identify and engage moderate, progressive voices within the global Muslim community. Help them get in our boat. Leave the fundamentalists on the dock, where they belong.

Barbara Amiel takes the conventional view that the issue of the Charlie Hebdo cartoons is a matter of free speech (“Islamists won’t kill free speech—we will,” International, Jan. 26). But some of the Charlie Hebdo cartoons are just as disgusting as the Jew-hating cartoons produced by the Nazis during the Third Reich. Amiel has a good record in defending the rights of Christians and Jews and the need to physically protect their lives and their religion. She should do the same for Islam, instead of resting her case on a double standard: one for Islam and another for the rest.

Barbara Amiel has the intelligence to grasp, and the guts to say, that by censoring ourselves, by failing to address clearly the existential threat of Islamist terrorism, we are destroying our civilization.

Why is it that publishing certain opinions is considered a hate crime, yet religious satire—which offends the deepest sensibilities of millions of people of various faiths—is being applauded as an expression of free speech? Where is our decency toward fellow human beings? Offensive publications regarding my Christian faith abound. Having said that, no offence warrants killing the offender.

The CBC’s decision not to publish any of Charlie Hebdo’s cartoons was disrespectful to a large portion of their taxpaying audience. Something is very wrong when “causing offence” is equated with hate speech. Muslims may have a rule against depictions of their Prophet, but the rules by which people choose to live must never be allowed to trump the laws of the country they live in. What’s next? My steak dinner is offensive to vegetarians. In a diverse society, we cannot avoid doing things of which our neighbours disapprove. But that right is the very essence of diversity. If we don’t stand up for the freedoms we value—and that includes everyone’s freedom to practise the religion of their choice— then they will slowly erode.

I am dismayed by the response of Charlie Hebdo after the attacks: They wish to keep printing cartoons of Muhammad and other satirical content against him. The “Muslims” who claim to have avenged a man who forgave even those who threw garbage on him and murdered his family and friends have surely committed a bestial and unforgivable deed. But is it really practical for Charlie Hebdo, or anyone else, to instigate more than one-sixth of the world in the name of free speech? I mourn with them in their loss, but liberty is not the name of a boundless concept.

Why are car sales declining for the younger generation (“Young and carless,” Economy, Jan. 26)? Economics. For any person with the slightest financial sense, a new car is the worst investment you can make. High depreciation, expensive insurance, and shop rates of $100 per hour can hit a personal or family budget hard. I know few people who buy new; instead, they buy used and keep the car for many years. Bluetooth, powerful stereos or power windows won’t sell cars. The industry needs to offer much more basic, less expensive and easier-to-maintain vehicles that the average person can afford. Until that time, I will continue driving my 14-year-old Ford pickup with power locks that don’t work and a rusty bumper.

I am over 65. In looking for a new car aimed at the generation of which you speak, I was totally put off by the reliance on in-dash computers and touchscreens, which I have no interest in learning to use. So I bought a used car, pre-interface. A friend did the same. Maybe in pandering to one end of the spectrum, the car manufacturers are losing another. Personally, I’ll keep my fingers on the wheel and my eyes on the road. My screenless Toyota will do me for a long time to come.

A fellow at the Centre for International Governance says, “The West’s response to the Syrian refugee crisis has been abysmal, just abysmal—Canada included” (“Refugee time bomb,” International, Jan 19). The article discusses contributions various countries have made, but makes no mention of Israel, a country that shares a border with Syria. Surely Israel is also open to criticism, since it is not accepting any refugees. This is particularly surprising, given the complaints against Cuba, the United States and Canada, when these countries refused to accept a boatload of Jewish refugees in 1939.

Kudos to Colby Cosh for placing the Fukushima nuclear accidents into science-based perspective (“An ocean of radioactive illiteracy,” Jan. 19). I have spent more than 25 years studying, researching and simulating reactor accidents; Fukushima’s long-term effect are (and will be) much less than many would have us believe. This is not to diminish the serious nature of the accidents; the expensive cleanup will take decades. But the radiological effects on the environment and to humans are small. Much has been learned about severe accidents, and additional preventive and mitigating technologies have been developed and adopted. Given that nuclear science and technology have so many valuable applications throughout society, from medicine to industry to electricity, it is imperative that we become “radioactively literate.”

I agree with Colby Cosh’s apparent intention to enlighten people and reduce “an ocean of radioactive illiteracy.” However, he relies heavily on the nuclear industry and its powerful lobbying forces for his information. When it comes to trying to understand health effects and consequences of radioactivity, he would be better served by consulting medical sources: biologists, geneticists, or even physicists versed in health issues, rather than nuclear proponents. He might have learned that the consensus of medical evidence is that there is no safe dose of radiation. There is no dose of radioactivity that is so low that it cannot cause a cancer-producing mutation. Most such mutations do not show their effects until years later. Writing about Fukushima, Cosh says, “As responsible scientists almost universally predicted, the amount of radioactivity involved is infinitesimal and completely harmless. You can go ahead and eat the fish.” Among the responsible scientists with whom I communicate, none holds this opinion; all say the opposite. Cosh points out that the radioactivity from Fukushima “has, in fact, reached detectable levels on Canada’s continental shelf.” “Infinitesimal” levels would not be “detectable” on the other side of the Pacific Ocean.

When I entered dental school in 1972 at the University of Western Ontario, there were 10 women in a school of 255 students. I never heard, nor was confronted by, any of the misogyny exhibited this year at Dalhousie University (“The classless kind of gentleman,” Emma Teitel, Jan. 12). It seems society has regressed. It is beyond disgusting that these male students would fantasize about their classmates in such denigrating ways. I am certain that my classmates, way back in prehistoric times, would never have considered treating any of us gals in the class in such a vile way. In fact, I am certain that the majority would have risen in revolt at such talk. Thirteen students have tainted the entire Dalhousie class. So long as they are not named, no male in that class is to be trusted. If ever I need a new dentist and the one I find happens to be male and has a Dalhousie diploma, I shall ask what year he graduated. If 2015, I shall walk out.

Jaime J. Weinman’s article on musicals downplaying music in promotional material is correct but doesn’t go nearly far enough (“This chorus line thing? It’s nothing!” Film, Jan. 12). It also seems that the essence of the modern musical is to bring in competent actors who are totally incapable of singing, thus destroying the music from the top. The worst of these has to be Pierce Brosnan in Mamma Mia!, while Russell Crowe just about squeaks through in Les Misérables. In the days of big musicals, especially with the ladies, if there was a non-singing actress, the producers would bring in the incomparable Marni Nixon, who sang for Deborah Kerr, Natalie Wood, Audrey Hepburn and many others—perfectly copying all their voices—and nobody knew the difference.

I was surprised Chris Sorensen did not mention the advent of self-driving cars and the impact they will have on the lifestyles of the Millennials (“Young and carless,” Economy, Jan. 26). What could be better for a future automaker than to market a transportation device that not only allows typical 17-year-olds to do what they do best—send text messages, play with their Facebook profiles and occasionally talk on their cellphones—but also acts like a surrogate parent by bringing them to another location with little or no effort required on their part, other than programming initial trip coordinates?