Letters: Our readers on meat, MS, and more 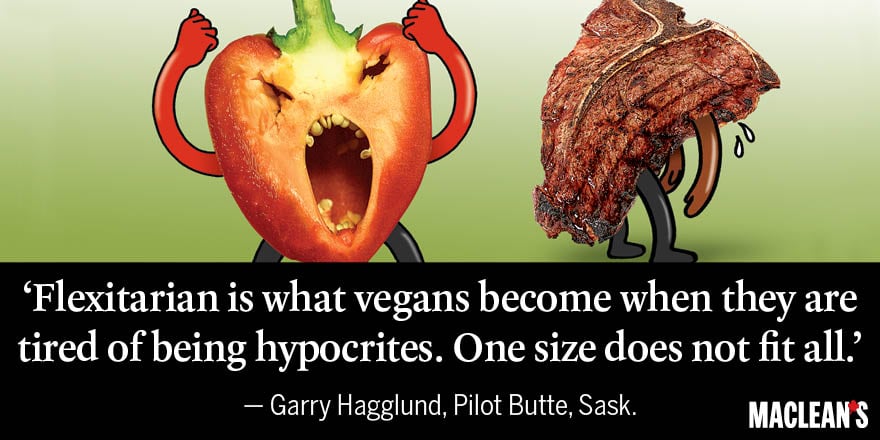 Food is a very emotional subject (“They go both ways,” Taste, April 27). However, as a society, we have a lot to gain by moving to a more plant-centred diet. The results will have a positive effect on pollution, climate change, animal welfare, personal health, national health care costs and world hunger. More than enough food is grown today to feed everyone on the planet, but most is fed to animals. There is no downside to going to a plant-based diet based on whole foods. Vegan, vegetarian, flexitarian, raw foodie, fruitarian, nutritarian, starchatarian—the name doesn’t matter as much as getting meat consumption under 10 per cent o f calories consumed, which is what science and modern comparative studies, such as National Geographic’s “blue zones,” are pointing to as the maximum amount of meat the human body can tolerate without causing long-term chronic disease.

Flexitarian is what vegans become when they are tired of being hypocrites. One size does not fit all. I do not even wish to participate in a game in which some elite group has claimed a word as theirs by virtue of having seen it first. Maybe they use it in a more meaningful way than those of us who just bandy it about. I think I am still permitted to eat the 10 per cent total animal protein recommended by The China Study, feel good about it, be healthy, and think for myself without going to the meetings. 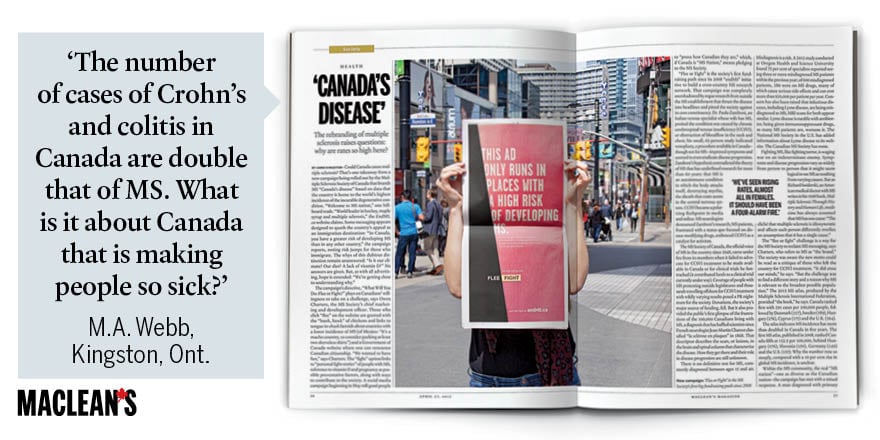 Another fine article by Anne Kingston on multiple sclerosis (“ ‘Canada’s disease,’ ” Society, April 27). At the turn of the century, MS was called faker’s disease. Eventually, radiology showed there were actual lesions. In the 1930s and ’40s, it was considered an infectious disease, and microscopic pictures revealed spirochete bacteria in the spinal fluid. Suddenly, this line of inquiry was dropped and it became a neurological disease. In fact, there may be four forms of MS, and they still don’t know its cause. You are right to point out that it may be a misdiagnosis of Lyme disease. Why else would Canada have the highest rate of MS and the lowest rate of Lyme? If someone fails a test for Lyme, or still has symptoms after an ineffective short round of antibiotics, she is referred to a psychiatrist, along with the likes of fibromyalgia patients. Physicians are taught a certain attitude of disrespect when dealing with Lyme and chronic-fatigue patients, and this is the hardest thing to change. In the meantime, the economic future of the pharmaceutical industry is in “managing” chronic diseases, not curing them.

Overachieving parents are bent on programming the lives of their children with tutors and classes after school, instead of letting them experience the wonder of the nature of life and make discoveries of their own (“The new tutor dynasty,” Help, April 20). It is very hard to foster imagination in a child in such an overscheduled school milieu with added stress from the parents. Kindergarten teachers are lucky: It is quite magical when a child suddenly discovers a new concept and the wonder of the discovery shows up on his or her face—truly a eureka moment. Play is a child’s work, and a way to develop and grow into a happy human being.

We are losing after-school musical training, athletics, team sports and arts lessons, etc., not to mention the simple value of outdoor play, exploration and socializing, to the ever-growing phenomenon of tutoring. This is an injustice to our children. That is what we as parents are responsible for. Their perception that their child needs a tutor amounts to an indictment of the education he or she is receiving at school. Good pedagogy would imply that the teacher has planned, presented and accomplished a successful day’s learning. A little homework to keep in practice, or a long-term project to demonstrate learned research and production skills, might be justified, but daily hours of after-school work is ridiculous and an abdication of responsibility.

No room for fear in faith

The letter from Lia Robinson depicts the kind of indoctrination that has turned too many people off religion (“You gotta have faith—in what?” Letters, April 27). It is fear-driven, superstitious and sucks the fun out of life. I was raised Catholic by parents who did not instill this fear in me. They had a genuinely joyous approach to religion, based on what I believe was a real love of God and community. There was no indoctrination into any belief system. As soon as we were teenagers and old enough to decide not to go to mass, we stopped accompanying them and that was okay. Most of us have gone back, and now all of us believe in most of the teachings of our Church. As parents, we, in turn, took our children to church. They are now young adults who may not go to church today, but I believe all are the better for it and carry with them the message of hope that is the essence of a belief in God.

I want to thank you for your reasoned and balanced article “God is the answer” (Society, April 13). I have been a committed Christian for over 20 years now. Although I was raised in a Christian home, I did not become serious about the faith until I was in my mid-20s. I became a Christian after listening to a story on the CBC about an encounter Stuart McLean had with a Christian missionary, who said that, before he became a Christian, he was a very restless, mean-spirited and angry man. After he gave his life to Christ, he became more peaceful, patient and kind. I decided that I wanted my life to change like that and recommitted my life to Christ. Being a Christian is a revolution of character and a system of belief. Before, I just acted on whatever impulse I had (mostly selfish). Now I am much more kind and considerate to people and more at peace. Religion, or at least Christianity, is a great panacea for many psychological problems. I would not trade it for anything in the world.

A life without faith is meaningless. Despite the harm caused by many who use religion to destroy, true faith gives hope to millions. Several studies have shown that those who attend church weekly are happier and more content with life. My wife and I have been greatly blessed through a relationship with Jesus Christ. This is more than a social club involved in do-good activities. I feel sorry for atheists who don’t want to be accountable to God. Every day, I am grateful for the impact Jesus has had on my life. He has helped me to be a better husband, father and employee. No, I am not better than anyone else, and I recognize my limitations and human frailty. I need God and am glad he loves and cares for me.

There is nothing liberal about Stephen Harper (“Who me? Conservative?” National, April 20). In fact, he heads a party so far from being liberal that he had to drop the word “progressive” from its name. His economic record has come at a staggering cost to the country. We do have more full-time jobs—but fewer as a share of total employment—as well as higher unemployment, and major corporations such as Caterpillar and Heinz have left Canada, in spite of generous Conservative corporate tax breaks. Make no mistake: Harper is all Conservative, all the time.

Scott Gilmore writes about the firepower and military weaponry employed by U.S. police forces (“America’s most armed and most dangerous,” International, April 27), but let’s not get too smug here. The police chief in good ol’ Medicine Hat, Alta., has just ordered up a half-million-dollar armoured vehicle. He claims to need it for the safety of his officers and the public.

I am writing about the work of Kyle Schappert featured in a recent photo essay (“Spinning gold,” Society, April 20). When I saw Schappert’s photo of steel wool sparking behind the Agassiz Ice sculpture, I wrote to tell my uncle, Gordon Reeve, the artist who created Agassiz Ice using stainless steel in 2008. I expected he would be pleased. Instead, he was disheartened, explaining that the thousands of particles left by the burning steel wool could coat the sculpture and rust onto its surface. Cleaning the sculpture would be labour-intensive, expensive and likely cause permanent damage, as well. He lamented to me: “Three years of my life for his three minutes of ‘fun.’ ” What a shame.

Hey, Toronto’s not the worst

Jonathon Gatehouse is apparently not aware that Edmonton, too, has an NHL team, albeit not much of a team, and actually worse than the Maple Laffs (“Joy everywhere but Hogtown,” Society, April 27). It does get minor-league mention much later in the article, but the headline said it all. Maclean’s should move out of Toronto and into the real Canada and the real world.

Your April 20 editorial about electronic tipping in restaurants reminded me of this old joke: Why is a Canadian unlike a canoe? Answer: A canoe will tip.