Letters: Our readers on Omar Khadr, BPA and Alberta 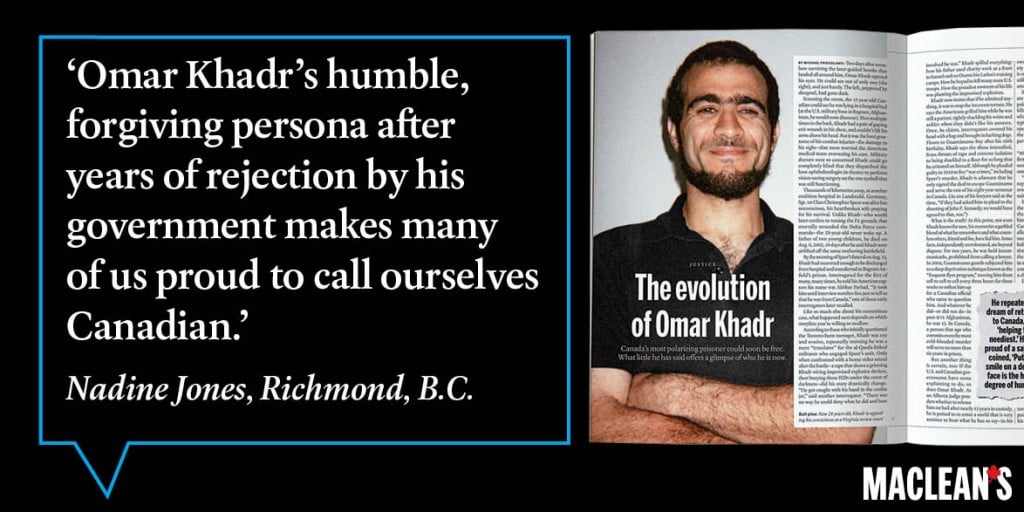 The decline and fall

Colby Cosh did an excellent job of summarizing the “Death of a dynasty” (National, May 25) in Alberta. I’d like to add that there are many Albertans who didn’t consider Ralph Klein an effective premier. He starved public education. His “third way” aimed to create an American-style health care system. His nasty, drunken behaviour was an embarrassment. The first real sign of the province wanting a change was in 2011, when centrist Albertans signed up for PC party memberships in order to ensure that Alison Redford won the leadership race. If there was going to be no real opposition to the Tories other than the further-right Wildrose, many Albertans were determined to pick a premier who might bring in some new ideas. Redford made some mistakes. However, the party that covered for Klein’s disgraceful behaviour was only too happy to sink the outsider. Whatever happens now, it is refreshing to live in a democracy again after 43 years of a one-party state.

“The evolution of Omar Khadr” (National, May 25) is as much a story about us, as a society, as it is about this young man. Whether one is sympathetic or not to his plight, it is undeniable that, at a minimum, he was not afforded due process. Even the staunchest advocates of his continued imprisonment would have difficulty arguing that being imprisoned for two years without access to a lawyer is right. Our need to personify a threat, whether real or not, justified our ignoring what we hold dearest: the rule of law. If we can so easily bypass these fundamental democratic values on purely ideological grounds, perhaps our own legal system and rule of law are not so resilient. His bail hearing was a return to rule-of-law principles and was the right decision. We must now reflect on how we deviated from these principles, and make sure it doesn’t happen again.

Omar Khadr is the product of terrorist parents. If Omar had parents who were white supremacists, who brought their children with them on their weekend camps of indoctrination, then sent their children to school with supremacist tattoos, how quickly would they have been removed from the Khadr home and placed in protective services? Our government did not protect him, our government allowed this to happen, our government is just as responsible for what happened in Afghanistan. He is collateral damage.

Stephen Harper’s overbearing attitude in his role as Prime Minister makes many of us ashamed to call ourselves Canadian, whereas Canadian-born Omar Khadr’s humble, forgiving persona after years of neglect and rejection by his government makes many of us proud to call ourselves Canadian. Despite Harper’s apparent personal vendetta against the young man, Khadr will come out on top—because, surprisingly, he isn’t filled with hate.

Your May 25 editorial connecting Sweden’s universal child care to poor academic scores was deeply ﬂawed. First, wouldn’t it make sense to look at a country’s actual school system when trying to find a reason for poor scores? Why on Earth would one leap to universal child care as a cause? Second, to really make a connection between universal child care and poor student scores, you’d need to look at other countries with affordable, accessible daycare, such as France—not Canada. Third, the emotional and financial tolls that expensive, unregulated daycare take on families is surely a greater negative influence on children’s development and future success than having a stable system that doesn’t impoverish families. Struggling parents in Toronto, for example, often sign on to whatever’s available out of sheer desperation, and costs an average of $83 per day. Your editorial was nothing more than sloppy, conservative fear-mongering.

The main beneﬁt of universal child care can be found in the creation of a more equal playing field for women of child-bearing age who choose to have children and enter the paid labour force. It is not every woman’s choice, but it should be a choice fairly available to every woman.

Rather than rooting around through the misadventures of Sweden’s education system, it would be more useful to understand the Finnish system, which the OECD claims is the gold standard for scholastic excellence around the world. In Finland, children begin school at age 7, requiring only one standardized test at 16. They rarely take exams or do homework until well into their teens. The students are not measured in any way for their first six years in school. Elementary school students have 75 minutes of recess each day. All teachers must have master’s degrees, the obtaining of which is fully subsidized. The national curriculum is broadly outlined. Teachers spend only four hours a day in the classroom and take two hours per week for professional development. Teachers are selected from the top 10 per cent of university graduates and there is no merit pay. The school system is 100 per cent government-funded. Both Sweden and Finland are borderline socialist states with generous welfare benefits. To suggest that Sweden’s abysmal educational outcomes are in any way related to its welfare system is simply wrong.

What strikes Paul Wells about Justin Trudeau’s new policies is “how much they resemble [Stephen] Harper’s choices” (“This is not a revolution, Mr. Trudeau,” May 25). What strikes me about Paul Wells’s article is that Quebec ever allowed a restaurant in Gatineau named Dinty’s—where Trudeau announced his new policies—to operate in the first place. Something tells me that, if, by some miracle, the Office québécois de la langue française hadn’t already been sniffing around that dirty anglo apostrophe, it won’t be long now. Tim Hortons, anyone?

Genna Buck writes there is no scientific consensus that Bisphenol A (BPA) is toxic at low doses (“Bottle battle,” Society, May 25). But consensus is not an appropriate model for risk assessment. Debates between scientists are common. The scientists at Health Canada are cautious professionals conducting world-class research and thorough reviews. They are not prone to banning substances without careful consideration of the scientific case for doing so. The assertion that there is grave risk of botulism associated with removing BPA from linings in canned food is refuted by the presence of BPA-free alternatives in the marketplace. When evidence is mounting that a given chemical may be harmful even at low levels, that’s justification to reduce exposure. When it comes to the growing evidence that BPA is harmful, more needs to be done to protect the health of Canadians, not muddy the waters.

Good news for a change

I was so moved by the story “The miracle twins” (National, May 4). Johanne and Michael Wagner: You are a true, shining example of selflessness. Thank you for sharing your family with us as you went on this incredible journey. One part of the story made me sad, though: when Johanne shared the criticism and loss of “dear people” around her over the twins. It is difficult to understand the intentions of such people. My message to them is: Please take the high road and embrace your inner goodness—you must have some—and speak to the Wagners once again. To know such a giving family is an opportunity of a lifetime. I only know them through the media and I am incredibly thankful.

I’m not a bleeding heart, and I get irritated when our social programs get abused. However, I whole-heartedly disagree with a reader’s letter about the twins’ lifesaving operations being a burden on our health care system (“The gift of life,” Letters, May 25). Their story brought us an awareness of our good fortune to live in Canada. How lucky we are to have been able to help, and we now have those happy, beautiful children here. Imagine what they can achieve and what they will give back. Their story is about the kindness of the human spirit.

Despite the fact that I have been a scathing critic of your magazine over the past several years, I happily concede that your May 4 issue is perhaps the finest Maclean’s I have read in my past 40-odd years as a subscriber, particularly the stories “The miracle twins” by Michael Friscolanti, and “His brother’s keeper” by Nancy Macdonald. I was virtually at the point of tears at several occasions during both articles. They eloquently addressed the most sterling traits of humanity: compassion and sacrifice.