'You neglected to mention the most important Canadian: the taxpayer!' 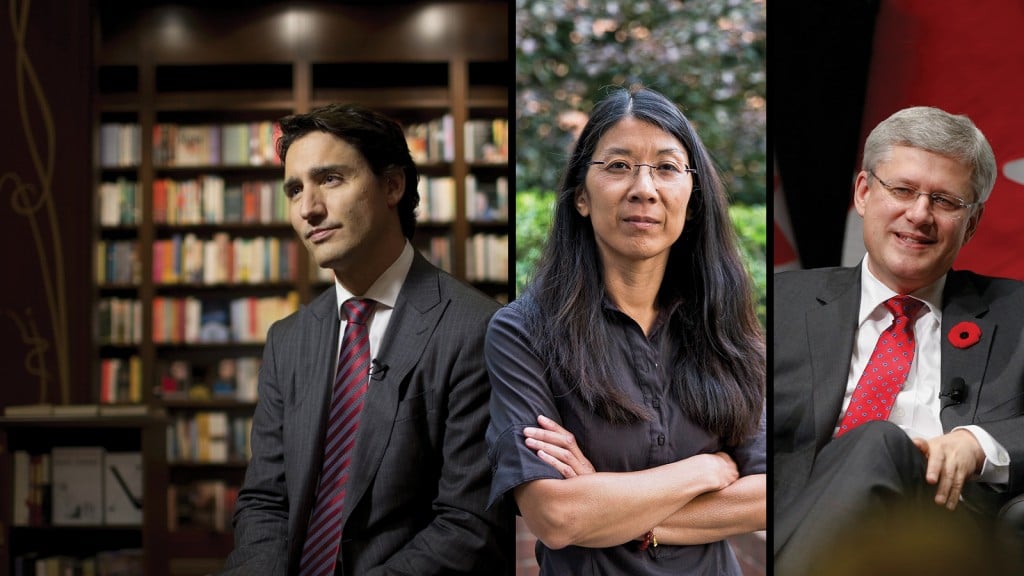 Congratulations to scientist Stephen Scherer (The Power List, Dec. 1) on achieving the near-impossible, which apparently includes working “100-hour” weeks—that would be 8 a.m. to 10:30 p.m., seven days a week—while he also “hangs around with hockey dads.” Perhaps his Nobel prize will be for time travel?

It was encouraging to see Rinelle Harper—the Aboriginal teen who survived a brutal beating in Winnipeg recently—cited in the introduction to your Power List, purporting to rank the most “important” people in Canada. I would argue that Rinelle Harper is, at this moment, perhaps the most important person in Canada. Sadly, the list itself turned out to be nothing more than a tip of the hat to powerful Canadians. Nowhere in the issue is it explained why Maclean’s equates power with importance. But then, we unimportant types probably wouldn’t understand.

Including a photograph of Peter Singer, an Australian philosopher, among photographs of the most important people in Canada (The Power List, Dec. 1) is a sloppy bit of work—and a contrast to the stellar work ethic of the Peter Singer you wrote about: the Peter Singer who is a doctor, professor, member of the Order of Canada and CEO of Grand Challenges Canada. Thanks for helping Peter, whom you say “is quick to deflect attention away from himself,” to do just that.

The review of the 50 most powerful Canadians brought attention to many who are forces for good in our country. I was baffled, however, at the inclusion of the Prime Minister in first place. Powerful, yes—but using power and influence to create an environment that tolerates foul attack ads, provides shallow and irrelevant answers at question period, undermines the function of the Senate, etc., all adds up to an abuse of power and trust. I had hoped your recognition of power would evaluate how that power is used.

You neglected to mention the most important Canadian: the taxpayer!

Your Nov. 24 editorial on shifting power from leaders to caucuses is excellent. Why not take it a step further and get rid of political parties? There are so many complex issues today, no two people can agree on all of them. Therefore, what function does the political party provide? In the blessed absence of parties, each riding would select its MP without outside interference. MPs would sit as Independents, and could speak freely on any issue, subject only to the wishes of their constituents. They would select one of their own as prime minister.

I find that the absence of gender-neutral language in Paul Wells’s “A no good, terrible, very bad year” (National, Nov. 24) derogates from the strong argument he intends to communicate. How is one to shed light on corruption and despair while implying that all future prime ministers will be male?

With less than 10 per cent of Canada’s land mass producing agriculture, we should all be concerned at this figure being reduced further (The Editorial, Dec. 1). There is evidence that the family farm is becoming obsolete, as children don’t want to endure the suffering their parents went through. The question of not only how much land should be farmed, but what should be farmed, is something to consider. I could never understand how one of the richest stone-fruit areas of North America could lose our fruit-processing plant. Wake up, Canada, and put this on our plate of priorities.

Towns and cities are situated where they are because their first settlers wisely chose to build their homes and farms in the most fertile areas they could find. Urban sprawl has already destroyed much of that farmland. Greenbelts protect most of what’s left. The permanent consequences of allowing ever more development on our priceless, irreplaceable—and finite—farmland would be catastrophic. You think we’ll soon be growing our present-day crops on the Canadian Shield? The thermometer might be edging up and new techniques might be giving some better yields, but reliable field crops can only be produced in deep, rich, Class 1 soil, which takes millennia to create. In Canada and in most of the world, new farmland doesn’t exist. We must treat our soil and water resources as if they’re the most precious commodities on Earth—which they are. Our almighty GDP would have a very bleak (and probably short) future if we embraced the irresponsible notion of a “rolling greenbelt” as a solution for anything.

Your editorial describes the 2.6 per cent of the farmland in the Great Lakes-St. Lawrence region of Ontario and Quebec that disappeared between 2001 and 2011, the biggest drop in any 10-year period going back to 1971. The editorial then goes on to conclude that efforts to protect this farmland are bad, because they stop farmland from being used for sprawling suburban growth, and this drives up housing prices in cities. Research shows that encouraging denser growth, more efficient transportation networks and protection of natural areas and farmland has not led to a scarcity of developable land. A recent report by Royal Bank of Canada and the Pembina Institute found there is no shortage of land within the Greater Toronto Area to accommodate construction of single-family homes. No one doubts that housing prices are rising in our cities. But policies like the Greenbelt Plan aren’t to blame. Part of the reason is that more people want to live in our cities, where travelling to work or school doesn’t involve a long commute fighting traffic jams.

I truly feel it is the courts and their associated procedures that cause so many not to take the steps to press criminal charges following a sexual assault (The Editorial, Nov. 17). I have never been raped, but, shortly after I turned 18, I was brutally beaten, assaulted with a knife, and held against my will for hours. The attack left me with two black eyes, my entire body bruised, and my face was unrecognizable to my friends. I have a scar on my neck where he’d held a knife to me. I could not have asked for better emergency-room nurses or police officers. When I went through the process of pressing charges, however, I faced hours in a courtroom standing in front of my attacker, being asked repeatedly about my prescription for anti-depressants and my sexuality (I’m a lesbian) than about what had been done to me. In the end, this man served a mere five months. I went to the court to help me and it was the court that I feel most wronged me.

In 2004, my then 17-year-old sister was raped at a house party. She was taken from the party to the hospital by ambulance, given a rape kit, and an investigation began; police decided to charge the rapist. Eighteen teenagers who were at the party gave statements. Two years later, the case went to trial. My sister was put on the stand for three hours. My family was not in the courtroom when my sister testified; she didn’t want us to hear what she went through. My sister’s rapist never took the stand. The jurors never knew that my sister’s rapist had a history of having non-consensual sex with teenage girls. It was the rapist’s right not to have his past brought into this trial, but my sister had her whole life raked over the coals. After less than one day of deliberations, the jury delivered a verdict of not guilty. I lost my faith in the justice system that day. I would advise anyone who is sexually violated to find support in family, friends, crisis workers and therapists. It is not worth the humiliation and pain of a courtroom trial, where the sexual assault will be relived, drawn out, analyzed, then swiftly dismissed, causing the victim to question whether an “assault” actually took place.

When Parliament was invaded last October and gunshots rang through the halls, no one knew how many invaders there were, nor their intended target. Under those circumstances, it was the absolute duty of those around the Prime Minister to protect him from possible harm—so they put him in a closet. To suggest cowardice on the Prime Minister’s part, as letter-writer Andre Fournier did (“Cowardly acts,” Letters, Dec. 1), shows just how low some people will stoop to denigrate the man.

If it be his will

Jim Inhofe, the incoming chairman of the U.S. Senate committee of the environment and public works, still appears to believe that climate change is a hoax (“Washington’s new power player,” International, Nov. 24). He seems to base his belief on the idea that God, not man, is responsible for climate. How seriously does Inhofe take his religion? If he gets sick, does he pray and go to a priest, or does he go to a doctor and, perhaps, to a hospital? It seems difficult to decide which things can safely be left in God’s hands and which need human action. It is a pity, perhaps a disaster, that people with Inhofe’s medieval views are in positions of power in today’s U.S.

Staying out of it

The Nov. 10 Quiz asks whether Britain supported the Confederacy or the Union in the American Civil War; the answer given is the Confederacy. As a history teacher, I can assure you that Britain supported neither. There were advantages for Britain in a Confederate victory, which some British politicians realized. In 1862, as chancellor of the exchequer, future prime minister William Gladstone supported the Confederates, though Britain was officially neutral. John Russell, foreign secretary during much of the war, and a lifelong reformer and anti-slavery man, clearly hoped for a Union victory. The nuance of the policies he followed at that time clearly favoured the Union. Most British labourers clearly favoured the Union. The most Britain did was grant belligerent rights to the Confederacy, which allowed it to purchase supplies in neutral nations and have certain rights at sea.

So “a national conversation about sexual assault has begun” (The Editorial, Nov. 17). Where are the men, the decent men? Why is it that it is mostly women who speak up, stand up, and organize for change about issues that affect women, children and family? Why do the decent men not show their disapproval of those men who demean and speak degradingly of women, or who physically abuse women, especially in public? The way men (of all ages) speak about women, and their attitudes to and treatment of women, will never change in society or the culture unless the decent men publicly and actively show their disgust and disapproval for those types of behaviours, particularly in young men.