Liberals hand out giant pieces of cardboard too.

A propos of absolutely nothing, I swear, here are a few choice pictures of Liberals with giant cheques, from the recent past.

And before anyone accuses this corner of Conservative counter-hackery, let me say this: to hell with the two of them. A pox on both houses. I vote only for one party–at least they’re honest–and will only say this: this kind of holier-than-thou name-calling is the reason good people stop caring enough to vote. Get back to work, the two of you*.

Here’s Richmond Hill MP Bryon Wilfert with a big cheque. “There is no comparison with the Conservatives,” Wilfert told Maclean’s. “No one is trying to pass this off as Liberal money. End of discussion.” (Not quite. See * below.) 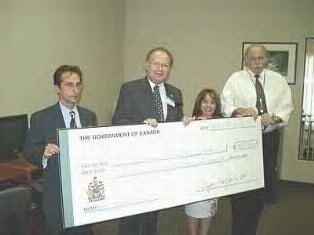 Here’s Malpeque, PEI MP Wayne “Stephen Harper has done everything that he once criticized” Easter, giving a real Government of Canada cheque to a local PEI businessman in 1998. 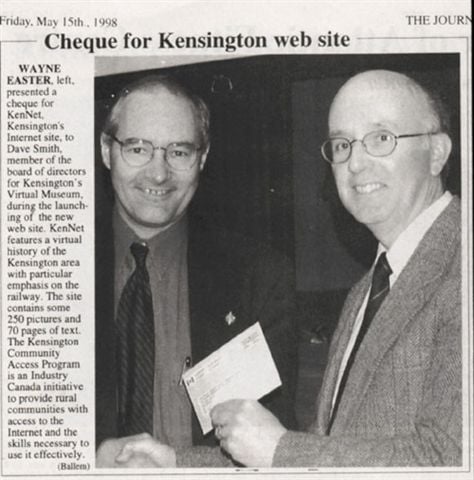 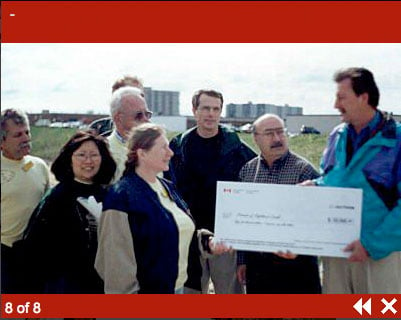 York West MP Judy Sgro, handing over a surprisingly cheque-like piece of cardboard–without any Government of Canada markings at all. Her office didn’t respond to requests for comment.

Last but never least, Scarborough-Agincourt MP Jim Karygiannis. “Cheques like that have been delivered since parliament was invented,” he told Maclean’s. Exactly! 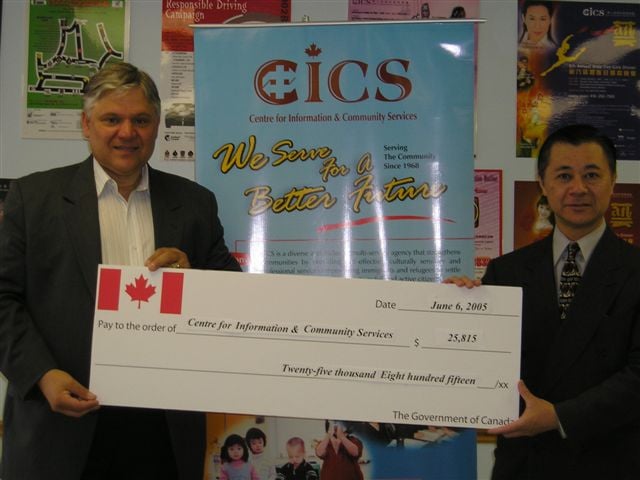 *Oh, and to anyone who says, Well, yes, but at least the Liberals didn’t have the gall to put their names or party affiliation on these oversized cheques, I say this: most of the pictures of ‘Conservative partisan cheques’ wafting out of the Liberal fold are no different from the ones above, in that they are run of the mill political grip-and-grin photo ops. Also, remember this little ditty: Quebec Liberal MP Claude Droin once helped a local college obtain a $5,600 scholarship, and the college repaid him in kind by stamping his name on a plaque. Little more permanent than a novelty cheque, no?

And don’t get anyone started on Alphonso Gagliano. Surely the erstwhile Public Works Cabmin didn’t spend $6,800 of sponsorship money–earmarked, lest we forget, to promote the Federal Government in Quebec–on a “Piazza Canada” plaque… in San Martino, Italy?

UPDATE: This is exactly what I’m talking about. The Liberal whatever-room just put out a media release entitled “181 partisan cheques is not an isolated incident”. Among the purported Conservative partisan atrocities is the one below, with Jim Flaherty. Take note: there is no Conservative logo and no Jim Flahery signature, just a grinning Jim Flaherty holding a big piece of cardboard with three other stunned-looking people. Yes, there are some flagrant indulgences in there (You there, Larry Miller, take a bow), but overall the so-called ‘partisan cheques’ are just examples of plain, everyday politicking identical to the (Liberal) pictures above. 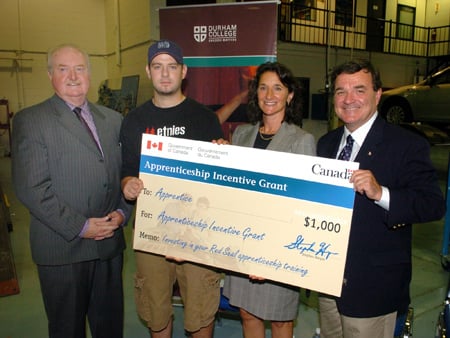