Life, On The Line: A Chef's Story Of Chasing Greatness, Facing Death And Redefining The Way We Eat

By Grant Achatz and Nick Kokonas 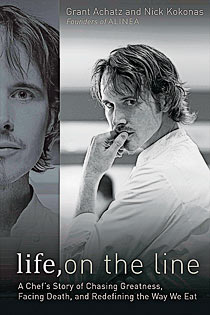 When news broke in 2007 that American chef Grant Achatz had been diagnosed with stage IV tongue cancer, it seemed an unthinkably cruel cosmic joke. Achatz, then only 33, was one of the U.S.’s most creative chefs, famed for his cunning vapourized, liquefied and freeze-dried confections. His two-year-old Chicago restaurant, Alinea, was a culinary mecca, famed for its ever-changing 25-course tasting menu.

So the very existence of this new memoir charting Achatz’s rise and gruelling recovery is cause for celebration. Clearly, the dogged determination and refusal to accept the status quo that propelled Achatz from flipping eggs at his parents’ diner in St. Clair, Mich., to his own iconoclastic four-star restaurant also saved his life: he resisted conventional surgery that would have left him without much of his tongue, neck and jaw, opting to soldier through a brutal chemotherapy regimen that devastated his ability to taste for a time.

Yet for such a ballsy chef, the book, co-written with business partner Nick Kokonas, is oddly restrained, filled with fascinating ingredients but lacking intense flavour. Anyone looking for Anthony Bourdain-style dirt will be disappointed. As will those wanting insight into Achatz’s creative progress. The high cost of restaurant life on personal relationships is hinted at but skimmed over. And Achatz appears oblivious to his debt to the molecular gastronomy tradition—as if he’s the first guy to inject purée into plant stems or to make rice paper taste like pizza.

But perhaps the ego, drive and single-mindedness required of a great chef precludes the sort of introspection required of a great memoir. Still, there’s much to savour—including Kokonas’s riveting account of Alinea’s start-up days when they googled the names of guests to detect critics. Now they’re in expansion mode—a happy, inspirational ending that could explain the careful, diplomatic book preceding it.

FILED UNDER: Grant Achatz Life Nick Kokonas on the line