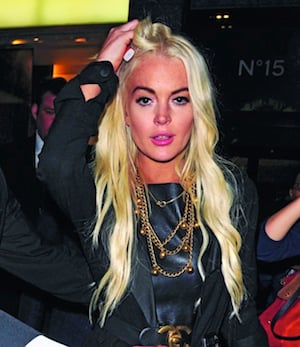 Reports say that Lohan was on the set of Anger Management Monday, where she played herself. The script has Lohan falling for Sheen’s psychiatrist character, Dr. Charlie Goodson.

Lohan, who has become notorious for being difficult to work with, was in fine form and showed up ready to work at 9 a.m., a source told the New York Daily News. “She looked surprisingly good and was upbeat and professional,” the source said.

Rumours say that Lohan made the cameo after Sheen gave her $100,000 to help her pay taxes.

Prior to her appearance on Anger Management, Lohan was in court (again) where a judge ordered her to undergo 90 days in a rehabilitation facility on March 18. She must be in a facility by May 2, reports the Los Angeles Times.

After that court appearance, but before getting down to work on Anger Management, Lohan reportedly found some time to make the most of life before the rehab stint. The star was spotted at a couple California night clubs in San Diego and Santa Monica over the weekend.

Lohan however, used Twitter to say that it wasn’t her at those clubs.

Guys relax, that was NOT me at A/V or in the @mrpink SUV. I’m taking this seriously and focused on the road ahead.

I stayed in last night, after a pretty long day…and ordered sushi to my hotel.