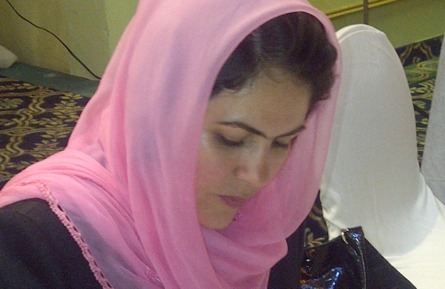 A few years ago, the Canadian novelist Yann Martel embarked on a project he called “What is Stephen Harper reading?” For as long as Harper was prime minister, Martel vowed to send him a book, every two weeks, accompanied by a letter explaining why he thought Harper should read the book.  I really disliked the project; I thought it was a smug little exercise built around the prissy conceit that Harper lacked “stillness.” Nevertheless, Martel’s idea was in the front of my mind last week, as I found myself sitting a table in a banquet hall in the north-east reaches of Toronto. If there is one book I’d like to press into Harper’s hands, and sit on him while he reads it, it is Letters to my Daughters, by the Afghan member of parliament Fawzia Koofi.

The end of May saw an interesting pairing of events on Canada’s Afghanistan file. First off, Stephen Harper paid an unexpected visit to Kandahar, where he took a helicopter tour of Canada’s soon-to-be-former stomping grounds in Kandahar City, of Tarnak Farms, and of a forward operating base at Sperwan Ghar. He also took the opportunity to declare that while there was still a lot of work to be done, “This country does not represent a geostrategic risk to the world. It is no longer a source of global terrorism.”

Harper was also quoted in the Globe and Mail saying that  “Canada has been in Afghanistan now longer than we fought in the two World Wars combined,” a statement that basic math shows to be impossible. Harper’s office claims that what the prime minister actually said was that we’d been in Afghanistan “almost as along” as the World Wars, though it isn’t clear why that is even relevant. (The Canadian peacekeeping mission in Cyprus lasted 29 years, and 28 soldiers lost their lives. What’s the point? Exactly).

It wasn’t exactly Harper’s “Mission Accomplished” moment, but it was obviously an attempt at putting a victorious spin on Canada’s imminent departure from Kandahar. By putting the stress on the neutering of the global terrorist movement that was based out of Afghanistan, Harper was reaching back to the earliest days of Canada’s involvement there, as a bit player in Operation Enduring Freedom, the US-led war that was focused on chasing the Taliban from the country and preventing al Qaeda from using it as a base of operations.

It was also an obvious attempt at pretending that everything that Canada had done since OEF – the peacekeeping and nation-building effort in Kabul from 2003-2005, the 2006 combat mission in Kandahar killing “scumbags,” the transition to counter-insurgency, the whole-of-government approach to building democracy, supporting good governance, building the infrastructure for economic development – was just a series of sideshows that embodies no long-standing commitments, represents no unfulfilled promises. What matters is that Afghanistan no longer represents “a geostrategic risk” to the world, and if there is a still a war going on from which Canada is taking an early leave, well, Harper has an answer to that, too: “Afghanistan has probably had an insurgency forever, of some kind,” he said in 2009.

That, too, is utterly untrue, though it probably comforts Canadians to believe it. After all, you can’t have unfinished business if the work never ends. But as Thomas Barfield says in his recent and indispensible book Afghanistan: A Cultural and Political History, Afghanistan is one of those countries about which those who know the least seem to have the most to say.  So perhaps it is time for Canadians – and those of us in the West who are interested and engaged with the country – to listen for a while to what Afghans are telling us.

I had the opportunity to do a good amount of listening last week at the Toronto launch of  Fawzia Koofi’s book Letters to my Daughters. Koofi has been in Canada for the last week or so promoting the book, which is a memoir of her life, organized around a series of short letters addressed to her young daughters, Shuhra and Shaharzad. Each letter contains words of advice or encouragement, and is organized around a specific theme such as loyalty, ambition, or family. Each letter sets the stage for the chapter that follows, tracing the story of Koofi’s life from her birth in Badakhshan in 1975, to her current status as a member of parliament in the Wolesi Jirga in Kabul.

And what an awful, incredible, story. Letters to my Daughters is one of those books that deserves its own section in the bookstore, filed under “books that make you stop complaining about your own life.” Fawzia Koofi was born into what passed for a life of privilege in her part of the world – her father was a local honcho who was the MP for the region under the king, Mohammed Zahir Shah. But Fawzia was the 19th of her father’s 23 children by seven wives, and unwanted by her exhausted mother, she was left in the sun to die. But baby Fawzia was a survivor, she lived, and she became her mother’s best-loved child.

Koofi has needed every ounce of those survival skills during her life. Her relatively  placid and privileged early years were spoiled by the arrival of the Soviets and the rise of the muhajeddin, the latter of which executed her father. Her brother was later assassinated in Kabul for reasons that remain unclear. Her husband was imprisoned three times by the Taliban, caught tuberculosis in jail, and eventually died, though not before fathering two daughters. The family moved constantly, often just ahead of people trying to kill them, trying to find the space and time for a normal existence. The story of Koofi’s life is almost cinematic in its juxtaposition of triumph and tragedy, hope and despair. Black-turbaned Taliban invariably arrive on the scene just as escape is at hand; while untimely death haunts every celebration. As Koofi writes at the end of the book, when the confirmation of her election to parliament is punctuated by word of her nephew’s death by drowning: “I struggled to believe what I was hearing. Why did every happy event in my family have to end with a tragedy or a death?”

And yet somehow, along the way, this unwanted daughter from a cultural backwater of one of the most patriarchal societies on earth found a way to educate herself. She learned English and then taught it to other women. She enrolled in medical school, started working for the UN, and then out-bid her brothers for the right to stand as the family’s candidate for parliament in 2005. She won her seat, then won a subsequent election as the country’s first deputy speaker. Fawzia Koofi may very well be president of Afghanistan someday, assuming the Taliban don’t succeed in their ongoing efforts at blowing her up.

In some ways, Letters to my Daughters is the mirror image of Steve Coll’s book Ghost Wars, which chronicles the involvement of the West in Afghanistan between 1979 and 2001. Koofi’s book tells us what it was like on the inside, to have your country serve as the site of a violent and repressive tug of war between competing ideologies, and – more accurately – competing thugocracies. One of the most compelling angles to the story is how completely alien the Taliban are to the non-Pashtun Afghans. They appear in the narrative like some weird, science-fiction menace, pushing relentlessly northward, scoring victory after victory, imposing their arabist customs and interpretation of Islam on a people who had always considered themselves the pre-eminent practitioners of the Muslim faith.

This bears emphasizing, because it has become an article of faith in the West –first amongst the anti-war left, but now in the highest reaches of the Obama administration – that the Taliban ideology is an authentic and long-standing part of the Afghan political fabric, and that ending the war will require some sort of bargain under the rubric of “reintegration and reconciliation.” Fawzia Koofi begs to differ. As she sees it, the R&R agenda is largely driven by the West’s desire to bring its troops home as quickly as possible: “That is a mistake. It is another short-term quick fix that will do nothing to solve the world’s problems, only store them up and make them worse for another day.”

Fawzia Koofi says a lot of things that make people in the West uncomfortable. She believes in Sharia law. She doesn’t mind wearing a burqa. But perhaps the greatest discomfort comes from her conviction that the worst thing for Afghanistan, and for the West, would be for the NATO troops to pack up and leave. In this, she is the countervailing force to Malalai Joya, the 33-year old Pashtun woman who was also elected to the Wolesi Jirga in 2005, but who was kicked out two years later for accusing many of her colleagues of being unfit for service in the new Afghan government. Joya is also noted for her strong opposition to the presence of Nato troops in Afghanistan and her belief that their presence is only fueling the insurgency.

Koofi has little to say about Joya in her book, and what she does say is in a tone of respectful disagreement. If she resents Joya’s unofficial title in the West as “the bravest woman in Afghanistan,” she does not let on. But one thing she is dead certain about is that the ongoing presence of Western troops in Afghanistan is vital to her country’s future and the security of the West. As she said toward the end of her remarks last week, at the Taj Banquet Hall on Steeles avenue in Toronto, the insurgency is growing, and terrorism is coming back to Afghanistan. But terrorism respects no borders, and she believes it will inevitably arrive on Canadian shores.

In this, Koofi is perhaps deliberately echoing the words of Ahmad Shah Massoud, the leader of the Northern Alliance, the “Lion of Panjshir” who spent the last months of his life trying to warn the West about the growing threat from the Taliban and their guest, Osama bin Laden. Yet Koofi also wants to remind us that despite its reputation as an “exporter of terror,” Afghanistan is very much a victim of it, perhaps more than any other country on Earth. Yet still there is hope. As Koofi writes in the book’s closing passage, “We don’t have to be a nation that the world either fears as terrorists or pities as victims. We are a great people and we can be a great nation.”

To do that, though, the country still needs our help, and the West has made a bad habit of forgetting Afghanistan. Steve Coll’s book contains a remarkable anecdote, about an aide approaching George H. W. Bush in the early 1990s with some news about ongoing problems in Afghanistan. Bush is alleged to have replied, “Is that thing still going on?”

Fawzia Koofi is here to tell us that despite our prime minister’s bad-faith assurances to the contrary, this thing is most definitely still going on. Whether we like it our not, our adventure in Central Asia long ago transitioned from preventing the export of terror, to bringing peace, stability, and national reconciliation to Afghanistan. It might surprise our prime minister to learn that many Afghans took that commitment quite seriously.