I’m not sure what to expect from this. Judging by the advance press, we’re in for some touchy-feely, Barbara Walters-esque material. We’re told Julie Couillard felt “abandoned” by the House of Commons’ resident heartbreaker, Maxime Bernier, after the scandal broke. That she’s seen her (otherwise good?) name dragged through the mud and, crucially, that she wore a beige pantsuit.

9:01 PM
Couillard insists she did nothing to “embarrass her country.” I’m not sure she was ever accused of doing that. Bernier, I believe, is the embarrassing one.

9:06 PM
The most famous dress since a certain blue Gap dress, the one Couillard wore to the Cabinet shuffle… turns out Bernier picked it out. TVA-gettin’ the scoops!

9:11 PM
Couillard just took out a picture of her, Bernier and George Bush, who apparently complimented Bernier for “keeping good company.” Talk about a compliment that’s hard to return: “my, my, isn’t Cheney looking particularly undead tonight?” isn’t exactly the best ice-breaker in the world.

9:17 PM
Despite Larocque’s prodding, she won’t say what the document was about: “that’s all I have to say about it.”

9:19 PM
Couillard claims her home alarm system was de-activated when she left her house for the first time after the scandal broke.

9:20 PM
Whoa. “Specialists” who came to inspect her house afterward say it was bugged. More specifically, her boxspring had a mike in it. Gross.

9:22 PM
Couillard says she was definitely under surveillance. You’d think that if Bernier or Couillard was under surveillance, they would have known about all this biker business, no? Or, at the very least, someone would have stopped Bernier from buying those Jos Louis before heading to Afghanistan.

9:26 PM
“Knowing what he knew about me, he should have warned me.” So, Bernier knew about the biker links? C’mon, Larocque-seems like an obvious follow-up.

That’s it? Bernier resigned over that? I guess that security breach was going to be a little hard for Harper and the gang to overlook. But perhaps the whole lot of them should have to resign, too: I mean, who gives Max Bernier confidential documents anyway?

UPDATE: Here’s a screenshot of the search terms used to get to the blogs. You’re in fine company, Mr. Wells. (And to whomever searched for “Julie Couillard photo” or “pic”: step away from the keyboard and go get some fresh air. I mean, really.) 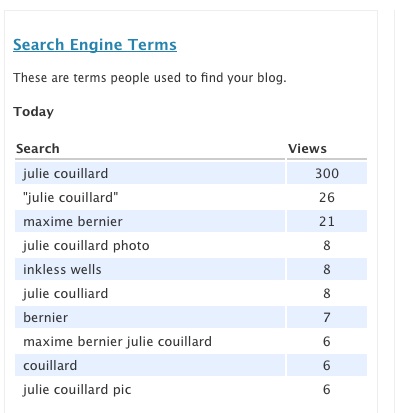