Long live the Nordiques! (But let someone else pay for them) 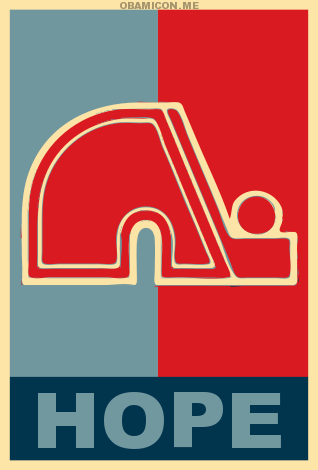 The chips appear to be falling into place for Quebec City as it looks to revive the Nordiques franchise. The province announced Tuesday it would kick in about $180 million to build a new home for the as-yet-non-existent franchise, adding a plea to the feds to do the same. And if the Conservatives have no plans to fund the rink, they’re doing a brilliant job of hiding it—their Quebec City MPs were out and about sporting vintage Nordiques jerseys on Wednesday:

“As far as a new arena is concerned, our government is very interested to know if this can be done,” John Babcock, a spokesman for Transport Minister Chuck Strahl, said in an e-mail Wednesday.

“As the prime minister has clearly said, we would be very happy if (the) Nordiques could make a comeback to Quebec City.”

On the political front, Pierre-Karl Péladeau (the presumed owner of the new Nordiques) couldn’t have hoped for a more perfect set of circumstances to extract money from all three levels of government. Quebec City’s mayor, Régis Labeaume won the last mayoral election with a Stalin-esque 80 per cent of the vote after making his pro-Nordiques pitch a central part of his campaign. Given Labeaume’s immense popularity—the man’s a demi-god in la vieille capitale—it’s hard to imagine a better politician to be seen cozying up to. Moreover, absolutely no one wants to be seen as the politician who put a stick in his wheels. And if it takes a new arena to win a public handshake with the mayor, Jean Charest and Stephen Harper seem all too willing to oblige.

The result is that if it was money that drove the Nordiques out in 1995, it’s politics that’s bringing them back. But while a $400 million rink is permanent, the politics that built it are ephemeral. Things are likely to be radically different by the time the Nordiques 2.0 are lacing up in their new barn.

Let’s assume, as it seems increasingly safe to do, that the Nordiques get the combined $350-$360 million they’re asking for from the feds and the province to go along with the $40-$50 million the city has pledged to pay for a new arena. Let’s also assume the NHL is willing to either add a new franchise or move an existing one —La Presse‘s François Gagnon suggests Atlanta and Florida are ripe for the picking—to Quebec City. And finally, let’s assume all this happens in time for my beloved Habs to be once again beating the snot out of the Nordiques by the start of the 2014 season. (For the sake of comparison, the Pittsburgh Penguins needed about four years to sort out the financing and construction of a new arena. Of course, they already had a franchise, but whatever.)

By then (i.e. when the bills come due), if he’s still prime minister, Stephen Harper will be in his eighth year in power and on (at least) his third consecutive mandate. In the past 50 years, only Pierre Trudeau has served four mandates and even then, they weren’t consecutive. If history is any guide, Stephen Harper’s run in the prime minister’s office will be on its last legs.

Jean Charest, meanwhile, would have to win a fourth consecutive mandate to still be premier, which would be rather astonishing given the record-breaking animosity towards his government.

The most interesting player in all this, though, may be Gilles Duceppe, who publicly joined the Nordiques bandwagon weeks before Charest and Harper did. If he’s still around, a 67-year-old Duceppe would be in his 24th year in Ottawa and his 17th as party leader. Seven years will have passed since Duceppe announced he was leaving the Bloc to run as PQ leader before quickly changing his mind. It’s possible the incredibly resilient Duceppe will still be around, but if he’s not, the political landscape in Quebec will be totally different without him, making the ongoing race for those precious, winnable Quebec City seats an anachronism.

In other words, Charest, Harper, and Duceppe, are spending $400 million to score points in what could very well be their last respective election campaigns, for gains that will be temporary if they materialize at all. Don Martin and other critics of the arena can deride Quebeckers as “happily-bribed” all they want, but the quid pro quo that statement assumes is hardly obvious. What, exactly, have Quebeckers promised to anyone in all this, except to gladly take all the rope the feds, the province, and the municipality are handing out? After all, the Bloc and the Conservatives can’t both win Quebec City, and it’s unlikely Charest could win power again even if he were running against Satan himself dressed up in Maple Leafs jersey. The only one with a reliable shot at coming up roses is Labeaume.

But hey, at least Charest, Harper, and Duceppe will have tried and they won’t be on the hook no matter what happens with the team. And besides, what’s $400 million between people who aren’t even friends?