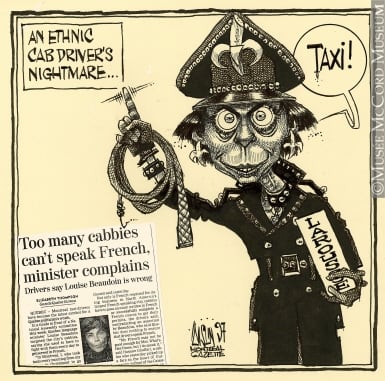 A former incarnation of Louise Beaudoin, by The Gazette’s Aislin.

Here’s the recent Q&A I did with Louise Beaudoin, language hawk, erstwhile péquiste minister and separatist true believer. A couple of notes:

1) Since we had this discussion in her National Assembly office a couple weeks ago, prominent PQ MNA François Legault left his post amid the usual ‘more time with my kids’ noise. Legault was sick of being in opposition–he said he “liked building, not criticizing.” Judging by her answers, Beaudoin isn’t nearlyas uneasy as Legault. “Why would I stop? It’s such a lovely road. I was elected to do this,” she said to me at one point. Patience is a virtue in the PQ, it seems, because…

2)…the party is having a rough ride, having lost two by-elections to the Liberals. More important, the much-hyped (in péquiste circles, anyway) New Sovereignty Plan, which Beaudoin discussed at length, was a fall-flat-on-your-face dud, as far as public reception is concerned.

3) She’s short, wiry, a nattily dressed and funny. She kept glaring at our photog, Liam Maloney, who was speaking to me in English. At one point she stopped the interview and shot Liam a glance. “Do you speak French?” she asked in mock outrage, in English. “Oui, oui,” Liam said meekly. “Good! Because he looked worried.”

“Not at all,” Beaudoin answered, looking exactly like this guy.