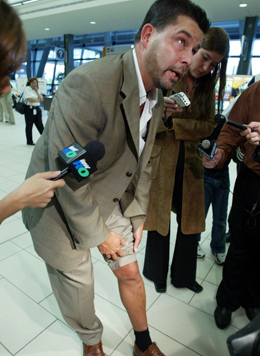 Military analyst and award-winning journalist Scott Taylor is well-known for his “unembedded” tours of Afghanistan and Iraq. And he knows more about what can go wrong than he’d like to. Kidnapped in northern Iraq in 2004, he spent five chilling days in the custody of Ansar al-Islam militants. Assistant Editor Chris Selley spoke with him about the kidnapping of CBC’s Mellissa Fung, the wisdom of “negotiating with terrorists,” and the perils of reporting outside the wire in Afghanistan.

Q: Based on what you’ve heard and your own experiences in Afghanistan, do you find anything unusual about the way Mellissa Fung’s kidnapping was pulled off? Or was this a pretty standard scenario?

A: I don’t know if there’s anything really standard about any of these things. There’s certainly categories [of kidnappings]. If it’s motivated for propaganda purposes to drive foreigners out, it’s a separate set of circumstances from those that are looking at this as purely a way of raising cash. [Fung’s kidnappers] didn’t use it for propaganda purposes. At no time did they make this public. So it would seem, from every source we’ve heard, including from Prime Minister Harper’s statements, that it was driven by the desire for ransom right off the bat.

Q: Are you surprised that the media blackout on Fung’s situation held as long as it did?

A: Pleasantly surprised, because all it would take is one guy to go and everybody would have jumped after him. And that would have forced our government’s hand, because [of] this whole position that they’ve taken—they’re still saying we don’t negotiate [with terrorists]. Well, all of us know that they were negotiating at all levels, [doing] every possible thing that they could do, getting all the assurances they could get and cooperation from the Afghan government. If they’d had to come out and make a public statement that they will not pay any money, we would all understand that that’s part of the gamesmanship that gets played for domestic politics. [But the kidnappers] wouldn’t, necessarily. [With a media blackout], there can be quiet assurances to the family: “Look, we’re still talking.” But that might not play out so well in a country when your word is your word.

Q: So does the official story—that there was no ransom and no prisoner exchange—ring true to you?

A: Not really, not given the level of the negotiations that were put into play, and the length of time that it took. She was unharmed. Normally in a case where the [kidnappers] didn’t think that talks were moving the way they wanted them to, they would up the ante—put her on the phone, screaming; release a videotape; send a finger; that sort of thing—unless they felt they were getting assurances the whole way along.

Everyone can claim a lot of things, and they’re difficult to refute or to confirm. I don’t know how much we could rely on the Afghan National Director of Security to [help us] pinpoint [Fung’s location]. [But] I think having them play a lead role in this was probably why we were successful. They wouldn’t necessarily operate within the same bounds that we would here in Canada. By that I mean, [any] people who were exchanged may not have been, in fact, in captivity when this thing first began. [Afghan forces] may have picked up the suspected relatives of the people they thought were holding [Fung]. A Crown prosecutor’s not going to go out and pick up somebody’s relatives and say, “you turn them over or [else].” They play by different rules, and they know the players.

[Update: In an interview with CBC’s Anna-Maria Tremonti on Wednesday, Fung confirmed her understanding was that Afghan security forces apprehended the relatives of the alleged kidnappers, and that their release was traded for her safety.]

Q: It’s a tough question to ask, because everyone’s obviously relieved she’s alright. But all things considered, if some kind of ransom or prisoner exchange took place, was that a good idea?

A: It’s one of those death by fire or death by drowning [situations]. In this case, if we can die by drowning but put makeup on the corpse and pretend it never happened, maybe some people will believe it. If Canadians don’t believe [a ransom] was paid and don’t know exactly what was exchanged for [her], it’s better than seeing her on Al Jazeera television having her head cut off.

And [it’s better for] supporting the mission, too. As much as it’s commonplace for our soliders to get killed, it’s one of those things. To have someone kidnapped and killed, lots more would be called into question. The government actually comes across looking like it has some level of influence in Afghanistan. I think [it] would please people to know that the sacrifice of our soldiers has produced, in this case, something positive.

Q: But regardless of what’s said in the Western media, wouldn’t the people on the ground know if a hostage was successfully cashed in?

A: Obviously the groups that did it would know what they got from it. How many times they can go to the well, who knows? But it really is escalating out of control. I know the precautions that were being taken a year or two years ago for NGOs and others outside [secure areas in Afghanistan] are not the same as they are now. It’s just getting riskier by the day. These people like Mellissa Fung who [go outside the wire], and others like myself and David Pugliese, we’ve really got to think twice about going back. As much as we know it’s important to get the bigger picture, rather than just the embedded viewpoint, she’s living proof that that’s becoming tougher and tougher all the time.

Q: A ransom or prisoner exchange would be quite embarrassing, politically. Canada came down pretty hard on South Korea when it reportedly paid $20 million to free its hostages in Afghanistan. The foreign affairs minister said countries simply shouldn’t be doing this, that it just encourages other people to undertake these kidnappings.

A: Exactly. And that’s why the less attention focused on that, the better. If someone in the media comes out with the smoking gun, and says blank amount of money was paid or these guys were released in direct relation to it, it will encourage [kidnappers], as opposed to everyone just willfully blinding themselves to the fact that that must have happened. It was the same with [the British Marines captured in Iran in 2007]. No exchange was made, they said. It just happened to be a coincidence that all these Iranians were released from custody.

Q: There’s been a lot of discussion about whether the media would have stayed silent for a non-journalist. Was there something specific about this case that justified the blackout, or is there a double-standard at work in the way the media reports?

A: It usually isn’t the media that gets alerted first. There’ve been cases in Iraq where Canadians, or Iraqi-Canadians, have been taken, [such as] the woman who was released shortly after I was taken and had gotten out. [The government] had known about her. They were quietly negotiating for her release, and because she wasn’t a journalist, the media wasn’t aware of it. The fact is [in Fung’s case], it’s CBC, and you know someone’s gone off the radar screen. It becomes their own dilemma. Then [the government has] to say, look, we’ll do everything we can, but we need you guys to remain quiet. Whereas if it’s a private citizen [and] a ransom note [is] delivered to the family, you can just advise them and say, “look, we don’t want the media involved.” And in most cases they’ll say, “okay, if it’s going to mean increasing the chances of them being released.” In this case, it was just that rare occasion where there was no choice; the media found out before foreign affairs.

Q: Reporters go through some pretty intense training on how to avoid kidnappings and other bad situations in war zones. Do you have any golden rules that you follow when you’re in Iraq and Afghanistan?

A: We obviously try to blend in as much as possible. We grow the beards and the long hair, and we have clothes that are filthy. We wear sandals. We tan before we go. But the fact is we stick out like dogs’ balls from 200 metres away to the average local, who can tell who’s a Tajik and who’s an Uzbek and who’s a Turkmen and who’s a Hazara from whatever distance by his hat, by his gait, by the structure of his face. You can minimize [the risk]. You can drive in an old car with a trusted driver. We have carried weapons when we felt the situation warranted it, and that’s something [even] some of the most left-wing NGOs over there also do, just because it’s almost an invitation if you don’t. Discretion is the whole key. But Mellissa Fung is living proof there’s no failsafe measure. She had a headscarf, and she looked the part. It’s one of those things, where if someone really wants to make a buck off you, they know where to find you.

Q: It’s not clear at this point if Fung’s fixer or any other locals she worked with were involved in the kidnapping plot, but Afghan authorities are still questioning them. How hard is it to find someone you can really trust in Iraq or Afghanistan? How do you judge?

A: [Insurgents have made] attempts in Iraq to get my regular driver in Baghdad. On my previous visit, [the one] before my last, they had approached him and offered him $2,000 to turn me over; they knew I was staying with him. So when I came back, he advised me they were onto it, and I didn’t stay there. He joked that he was holding out for $3,000 before he turned me over. But we had gone through a lot of things together over a period of a couple of years. We knew each other quite well. I knew his wife and his kid, and stayed in his house. But even then, they could threaten his family to make him turn me over, and that would be a whole different set of circumstances. Then he’s got to choose between his wife and kid, and me. You’re going to end up on the wrong side of it.