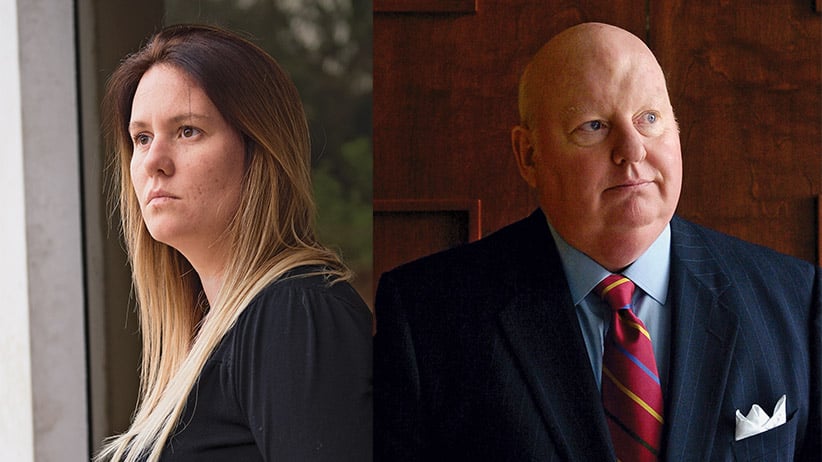 Karen Duffy poses for a portrait at her apartment in Lima, Peru (left). Mike Duffy from his days at CTV. (right)

Just show her the money

I’m no fan of Mike Duffy, but for Maclean’s to print an article about a Peruvian woman claiming he is her father is asinine (“A matter of family,” National, July 28).Who cares if Duffy had a fling 32 years ago? Not I! I’d only be interested in this story if Karen Duffy were to pay back what Mike Duffy owes the Canadian taxpayer.

Battle of the ages

The Boomers are smarter than we are, and these up-and-coming kids are more ambitious than we Millenials (“Get ready for Generation Z,” Society, July 21). So you see us as an unmotivated and unintelligent waste of a generation stuck between two glorious cohorts. Message received, loud and clear.

We should be electing members of this generation rather than the inept old fogies who, instead of solving our endemic problems, perpetuate them. Maybe young, fresh minds can end child poverty, First Nations’ second-class citizenship, chronic unemployment and underemployment, degradation of the environment, and health and education problems. The myth of “older and wiser” in the Senate has been exposed as a very expensive boondoggle.

Emma Teitel suggests that “Jews may hesitate to speak openly and critically about Israeli policy” because they fear anti-Semitism (“Why Jews don’t dare criticize Israel,” July 28). While her concerns are certainly founded, her assertion is not true. Gabor Maté, an infant survivor of the Holocaust, published an article entitled “Beautiful dream of Israel has become a nightmare” in the Toronto Star. Shira Herzog states in the Canadian Jewish News that: “Hypersolidarity [with Israel] can close down a conversation, because it can become a no-win, futile ideological debate.” Jews residing within Israel can be exceptionally critical. A column entitled “Israel does not want peace” was published in the left-leaning Haaretz. Even in the right-leaning Jerusalem Post, writer Gershon Baskin has suggested that Israel’s response to the Gaza conflict should not be purely military. The visible and virulent anti-Semitism that has arisen around the world and in Canada is not the by-product of Israel’s incursion in Gaza. The attacks on synagogues in France, “no Jews allowed” signs in Belgium, large crowds in Germany calling for Jews to be gassed, and the assault on Jews at a pro-Gaza rally in Calgary are anti-Semitic acts, plain and simple. Those who wish to criticize the policies of a state have the right to do so, but they must speak out and report to the authorities those among them who are committing hate crimes.

Emma Teitel’s opinion that Jews’ or Israelis’ criticism of Israeli actions and policies regarding Palestinians only leads to anti-Semitism is unproven, as well as counterintuitive. Jews and Israelis who go against the tide and are openly critical are few, as compared with those who wholeheartedly support Israel, no matter what—at least as recorded in opinion pieces in most news publications. A claimed or perceived growth in anti-Semitism in the world goes counter to Teitel’s beliefs on the subject. Perhaps it is the fear of being called a “self-hating Jew,” and what that might entail, that deters criticism, just as the charge of anti-Semitism deters non-Jews.

A need for speed

You have gone completely overboard in praising the B.C. government for increasing speed limits on some of the province’s highways (The Editorial, July 21). Speeding is the No. 2 cause of accidents (behind inattention) in most provinces, and is the No. 1 cause of serious injuries and fatalities. It seems odd, then, that the government of B.C. would increase speed limits. The reason is that some of the province’s highways are engineered to warrant speed increases, and this would seem to be acceptable, providing the new limits are enforced. You state that speed limits should be set by the motoring public, but this is completely wrong; it would be anarchy. What’s the hurry?

Getting goods to market in a timely manner is as important as producing them. The lower the speed limit, the more vehicles on the road and the longer that takes. The signs threatening drivers with exorbitant fines for exceeding the posted limit create further unsafe driving conditions: Drivers are so afraid of a fine, they drive at dangerously low speeds. Traffic moving at 120 km/h stretches out and results in a safe distance between vehicles.

Let’s look at the issue from a different perspective. We must reduce our consumption of fossil fuels. Your position utterly negates environmental evidence and years of government efforts to encourage improved automobile fuel efficiency. You claim the “truth” is that there will be no “appreciable” environmental impact. Many sources of pollution are not “appreciable” if you play with semantics; pollution is additive!

Perhaps a little more research would have revealed the fact that “Bermuda” shorts (and suits) have been formal fashion for many years in Bermuda and other countries (“Business up top, party down below,” Bazaar, July 28). Government officials have attended international gatherings in this attire without being called “casualized” or an abomination.

Thank you for continuing to keep the plight of Native Canadians in the light, where it belongs (“Second-class children,” National, July 21). We are neglecting and passively abusing a huge portion of our population, to our own economical detriment. Native children need a massive investment on the part of our government toward their future. Aboriginal and Inuit youth need to see themselves physically and culturally represented everywhere, and they need to know that they are valued as individuals, as they should have been from the very beginning.

Edward Yatscoff says he doesn’t know what’s racist about wearing a Native headdress, as if the wearer were a member of the Village People (“Hanging on to the headdress,” Letters, July 28). First, items such as moccasins and beaded vests are not appropriated, nor controversial to wear. They are functional clothing made by talented First Nations artists who should be supported. On the other hand, headdresses are given to leaders and individuals to celebrate their contributions to bettering their First Nations communities. Casually wearing a “hipster headdress” would be the equivalent of going to a rave or outdoor music festival and ironically wearing a war medal, yarmulke or turban. All are important cultural items, and it is important to respect their significance.

Give the U.S. a break

I was so pleased to read the letters from your readers in the July 28 issue, commenting on your negative coverage of the U.S. and its response to the crises in Iraq and Syria (“America surrenders,” International, July 14).From time immemorial, Afghanistan and its neighbours have been ruled by tribal factions. To suggest that the U.S. (or any other country) has the responsibility to move in with guns and troops to intervene in another country’s wars has proven unsuccessful. To say it’s America’s problem to solve is unrealistic.

The language of forgetting

As a Quebecoise who has lived in Ontario for more then 40 years, I was shocked by the comments made by Mike Rodgers from Bath, Ont., on changing the Quebec motto to “Je me souviens rien.” (Letters, July 21). My own mother and her Quebecoise sisters died from Alzheimer’s disease. Such a cruel remark about a common cause of death in Canada is offensive, and the worst part is that it was published in my favourite magazine. If Mike Rodgers wants to change the motto, he should also correct his French. It should read: “Je ne me souviens plus de rien.”

Sisters in nursing only

The articles on the Great War and the part played by Canada were well worth reading and extremely well-presented (“Could we do it again?” National, Aug. 11). One photograph, however, purported to show nuns decorating Canadian graves. They are not nuns. Rather, they are Canadian Nursing Sisters, the term given to nurses at the time—very brave young women who faced the terrors and perils of the front to treat the wounded.

Only in England, you say. Pity.

I disagree with Willi Boepple’s “Good Point” (Letters, July 21) that blames the consumer for cruelty to farm animals, as seen in Chilliwack, B.C. Boepple speaks of the “unrealistically low prices” Canadians pay for dairy and beef as the real reason for such abuse. On the contrary, when I visited England last year, cheese was about half the price as in Canada, and many contented-looking cows, sheep and pigs could be viewed from train windows, wandering freely in fields with hedgerow trees nearby for shade. Further proof of the far superior treatment of animals in the U.K. was that well-behaved dogs were allowed on trains and buses, and in pubs, teahouses and other shops. This meant, among other things, that single seniors could live with cuddly canine companions without the cost, care and pollution of owning a car. Wow, talk about live and let live!

Scott Feschuk says he doesn’t know where to look when at a urinal (“Maybe if I had a smoke bomb . . .” Feschuk, July 21). The English have this problem solved. In London’s Waterloo station (or maybe it was Picadilly) of the Underground, urinals face each other so one can easily converse with the urinator opposite. Of course, the English don’t engage in such banter, but in the friendlier atmosphere here in Canada, it might solve your problem. It would make for cheaper plumbing, too.

As a retired police officer who has had the privilege of working as a senior war crimes investigator (Special Court for Sierra Leone) and an internal affairs investigator with the United Nations (MINUSTAH/Haiti), I find Roméo Dallaire’s comments about Canada’s role in international conflicts insightful and refreshing (Interview, July 21). Effective intervention in armed conflicts, particularly internal ones, does require a vigorous and robust security component, be it police, paramilitary or military. Canada is well-placed to provide this, either through the UN or regional security groups such as NATO. The future will hold us responsible and accountable, as a nation, for failing to act where we could and should.